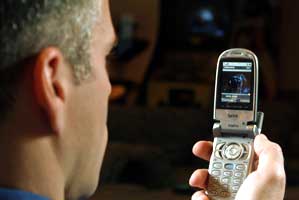 How about the Phone Awards? Category: Best Use of Phone. The nominees are: Calling up a busy spouse when you’re stuck in traffic and bored; Alerting the authorities about a serious accident; B.S.ing with your friends in the mall; Watching stupid little ads for stupid little products; Alerting Triple A about a serious accident. Triple A and the authorities cancel each other out, as do the actual phone calls, so, ladies and gentlemen, 2006’s Best Use of Phone: Watching Stupid Little Ads.

Don’t the Emmys have enough categories as it is? Is it possible that some form of human endeavor be conducted without the spectre of awards looming over it?

BTW, they give out awards for blogs. I’m sure THIS is the entry — insightful, pithy, blinkered and reactionary! — that’ll win me my lightly laminated certificate.