His Golden Globe nomination secure, “My Name is Earl” star Jason Lee was at work in the SFV Friday outside a car wash at the corner of Reseda boulevard and Saticoy.
END_OF_DOCUMENT_TOKEN_TO_BE_REPLACED 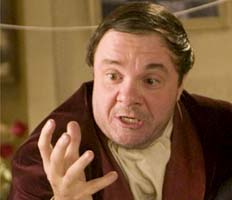 So I’m staring at the name “Nathan Lane” among the Golden Globe’s nominees for best actor in a musical or comedy, and I’m thinking that against the likes of fellow nominees Johnny Depp, Jeff Daniels, Cillian Murphy, Joaquin Phoenix and Pierce Brosnan, this guy hasn’t got a snowball’s chance in July.
END_OF_DOCUMENT_TOKEN_TO_BE_REPLACED

Dec. 5, 2005: Oscar winner and awards favorite Dame Judi Dench on the buzz surrounding potential accolades for her role in “Mrs. Henderson Presents.”
“It is speculation and speculation goes on about lots and lots of people. I think it’s rather dangerous to have it said about you. I don’t want it to distance anything and nothing actually could add to the fantastic time we had doing this film. We really did have the most extraordinarily infectiously terrific time.”

Note the “u” in honored. Veddy British, that.

OK, so Oscar winner Frances McDormand apparently needed some persuasion to join the cast of “North Country.” Director Niki Caro already had Charlize Theron and was closing in on Sissy Spacek and Woody Harrelson.

McDormand, on the other hand, was decidedly undecided. Caro even got vibes that F.M. was leaning toward never doing another film.

So with the studio urging her to start casting around for a second choice to play union leader Glory, Caro asked for the weekend to play her last remaining ace.

“I live in New Zealand, and there’s this wild and remote beach where there happened to be a raging storm that weekend,” says Caro. “However, I got my husband and my friends to write in letters 50 feet high, “Say Yes, Fran” like a big marriage proposal.”

The tides were not always cooperative and the storm made things extra tricky. Apparently, there were casualties. Caro’s husband broke his toe and their two children got ear infections. However, Caro filmed the beach message with a digital camera from a nearby mountain and e-mailed the footage off to McDormand.

The next morning, Caro found an e-mail reply from the actress: “Jesus Christ. I surrender!”

Which makes you wonder what it would take to get McDormand _ who just got a Golden Globe nomination for best supporting actress _ to do Caro’s next film. Skywriting anyone? 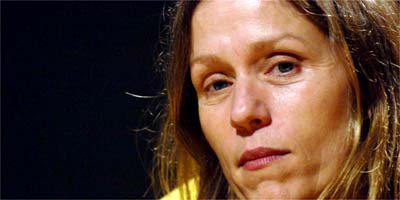