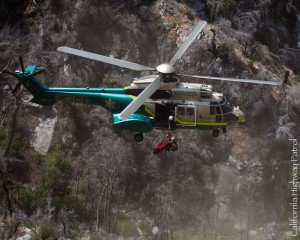 A Palmdale woman died at a hospital Friday after her car tumbled about 400 feet over the side of a mountain road, throwing her from the vehicle, authorities said.
The fatal crash was reported about 10 a.m. at mile marker 18.29 of Angeles Forest Highway, deep in the forest more than 5 miles north of Angeles Crest Highway, according to California Highway Patrol logs.
The woman, 41, was thrown clear of her 2002 Toyota sedan and had an arm severed in the violent crash, CHP officials said.
Firefighters used roped and a helicopter to hoist the badly injured woman back up to the roadway, CHP Lt. David Moeller said. She was able to tell her rescuers that she was the only person inside the car.
The injured driver was taken to Huntington Hospital in Pasadena where she died from her injuries a short time later, Sauquillo said.
Witnesses indicated the woman’s Toyota had been driving “aggressively” and at “a high rate of speed,” before turning sideways, skidding across opposing traffic lanes and jumping a raised embankment, Moeller said.
The cause of the crash was being investigated by officers from the Altadena office of the CHP.

PHOTO courtesy of the CHP