PICO RIVERA — Deputies are continuing to hunt for suspects and are seeking the public’s help in connection with a spike of burglaries in the parking lot of a Pico Rivera gym, officials said.
One suspect was jailed Tuesday in connection with one of the 30 or so vehicle burglaries reported over the past six months in the parking lot of L.A. Fitness at Washington and Rosemead Boulevards, Los Angeles County sheriff’s Sgt. Joe Van Damme said. Eight break-ins have been reported in the past three weeks alone.
Another suspect in the string of burglaries has been recorded on surveillance tape, he said, though detectives asked the public’s help in determining his identity.
Detectives Tuesday jailed a 21-year-old man at his Van Nuys home late Tuesday after he was linked to a Nov. 10 car burglary outside the gym, Van Damme said. Surveillance camera images captured the license plate of his car and his image as he took part in the break-in, along with two other accomplices, the sergeant said.
David Zulalyan was booked on suspicion of auto theft and was released from custody after posting $20,000 bail, according to sheriff’s officials and Los Angeles County booking records.
And detectives Wednesday released images of another man sought for a Nov. 15 burglary in the parking lot as he used a stolen credit card at a Montebello store within hours of the 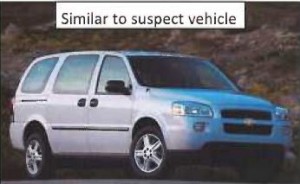 crime, Van Damme said. He was described as a Latino man between 18 and 25 years old, and a Chevrolet Uplander SUV was linked to the burglary as well.
Deputies keeping watch over the parking lot Friday afternoon briefly chased two men they spotted burglarizing a car in the L.A. Fitness Parking, however the thieves ultimately eluded deputies during the chase.
Anyone with information was asked to contact sheriff’s Deputy Chris Lopez at 562-949-2421, ext. 5523.