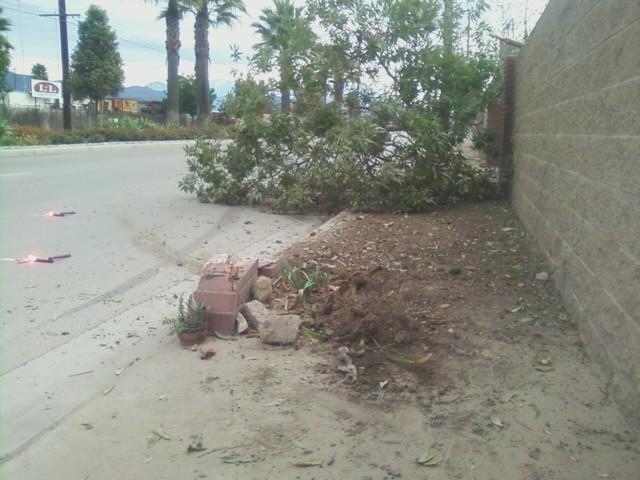 The community is rallying to quickly rebuild a roadside memorial to a slain sheriff’s deputy near Irwindale that was destroyed in a car crash Thanksgiving morning.
The memorial marked the location along Live Oak Avenue near Peck Road in an unincorporated county area near Irwindale, where Deputy David March, 33, of Saugus, was fatally shot after pulling over a career criminal on April 29, 2002.
A woman was driving eastbound on Live Oak Avenue about 7 a.m. Thursday when she fell asleep at the wheel and allowed the vehicle to drift to the side of the road, Los Angeles County sheriff’s Deputy Hector Figueroa said in a written statement. 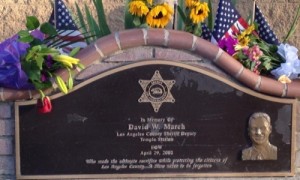 But the Irwindale Police Officers Association, which initially helped fund the monument, along with L & L Building Material Inc., which originally did the brickwork, are wasting no time getting March’s memorial restored.
“The cost is no issue. It needs to back up as soon as possible with no delay,” Irwindale police Officer and POA President Rudy Campos said.
L & L volunteered to redo the brickwork for free, and the Irwindale POA will have the plaque that adorned the memorial polished and repaired, Campos said. He expressed gratitude to L & L for stepping in to help.
Neither the driver nor her passenger were injured in the crash, but the memorial comprised of bricks and a metal plaque was destroyed, he said.
No crime was initially suspected in the crash, which was being investigated as an accident, officials said.
Campos said.
The importance of the monument persuaded officials to move forward with the repairs early next week, hopefully as soon as Monday, instead of waiting on possible compensation for the damage from the driver. It’s unlikely the POA will seek to be reimbursed by the driver who crashed into the monument he added.
The destruction of the memorial gave a glimpse into how deeply March’s slaying affected the local community.
Flowers have been showing up at the memorial site since the crash, Campos said.
Fellow deputies have held annual 24-hour honor guards over the site on the anniversary of 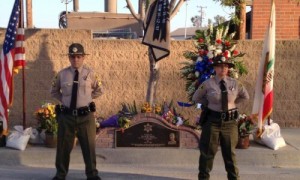 the deputy’s slaying.
Following the murder of March, who was assigned to the sheriff’s Temple Station, killer Jorge Arroyo Garcia, also known as Armando Garcia, fled to Mexico where he was arrested in 2006. He is now serving a life sentence in prison.