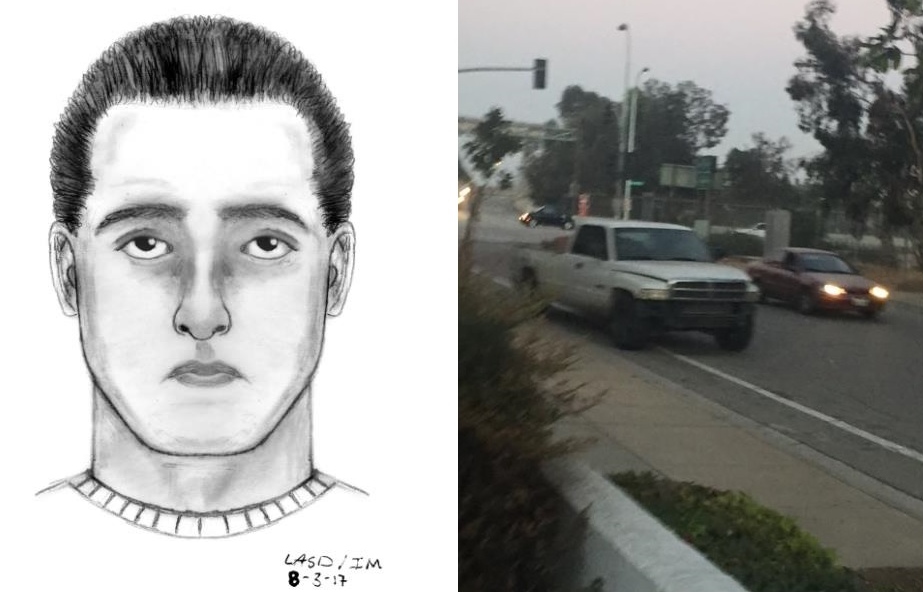 PASADENA >> Police have released a composite sketch of a man who tried to kidnap a woman from a Pasadena street before being scared away by a good Samaritan last weekend, authorities said.
The attempted abduction took place just after 8 p.m. along Maple Street, just west of Fair Oaks Avenue, Pasadena police officials said.
The woman, who was in her late-teens, suffered minor injuries to her elbows and knees from being dragged by the would-be kidnapper, but was not seriously hurt, Pasadena police Lt. William Grisafe said at the time.
She was walking down the street when she noticed a man standing on the sidewalk ne to the opened passenger-side door of a white pickup truck, Pasadena police said in a written statement.
“Once the victim walked past the suspect, the suspect pulled her by the hair causing her to turn and fall to the ground,” according to the statement. “The suspect managed to drag the victim a short distance despite her physical efforts to resist.”
A passing motorist noticed the struggle and came to a stop, officials said.
“This action by the witness caught the attention of the suspect, who then released the victim,” the statement said.
The attacker got into the driver-side of the pickup truck and was last seen driving West on Maple Street, then entering the 134 Freeway.
Officers searched the area for the suspect, as well as witnesses, officials said. He remained at-large Friday.
Police described him as a Latino man in his 20s, with a light complexion, of thin build, clean-shaven, with light brown hair.
He drove a white, late-1990s- or early-2000s-model pickup truck, possibly a Dodge Ram with an extended cab. It was missing its front bumper.
Anyone with information is urged to contact Pasadena police at 626-744-4241. Tips may also be submitted anonymously to L.A. Regional Crime Stoppers at 800-222-8477.