Police in Whittier are planning a crackdown on motorcycle safety next week, officials said.
The specialized “Motorcycle Safety Enforcement Operation” will be held throughout the city on Tuesday, Whittier police Sgt. David Elizarraras said in a written statement.
“Extra officers will be on duty patrolling areas frequented by motorcyclists and where motorcycle crashes occur,” he said. “Officers will be looking for violations made by drivers and riders alike that can lead to motorcycle crashes.”
Motorcycle-related deaths in California have spoked by more than 28 percent over the past decade, according to Elizarraras.
Over the past three years, Whittier police have investigated 71 motorcycle crashes that resulted in three deaths, 18 severe injuries and 50 other injuries, officials added.
“Operations like this are aimed at curbing any more rises in motorcycle deaths and sending the numbers back downward,” Elizarraras said.
Funding is being provided by a grant from the National Highway Traffic Safety Administration, through the California Office of Traffic Safety. 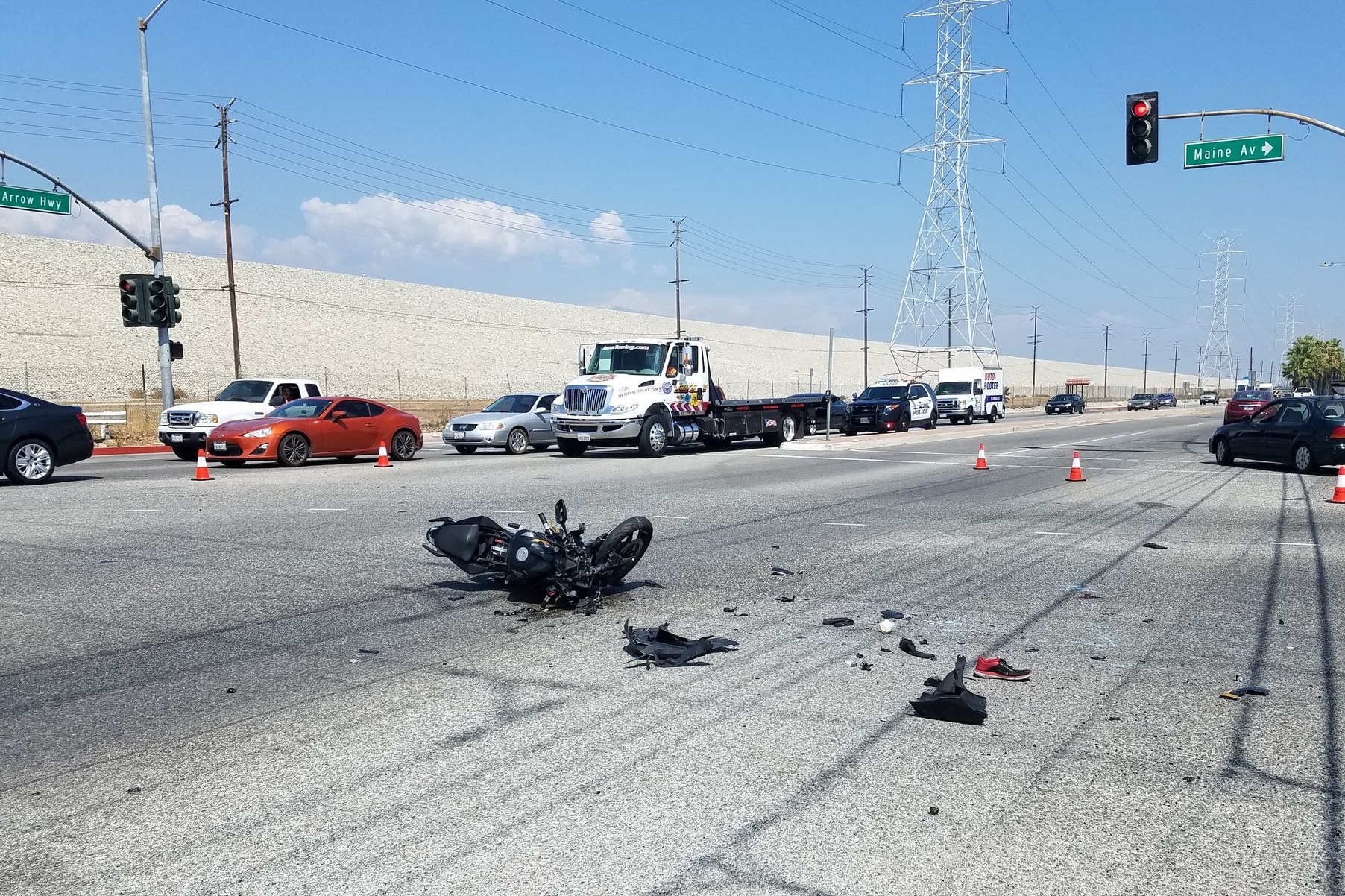 A crash between a motorcycle and an SUV on Arrow Highway in Irwindale sent the 19-year-old motorcyclist to a hospital with major injuries, authorities said.
The collision took place about 1:20 p.m. at Arrow Highway and Maine Avenue, on the border between Irwindale and Baldwin Park, Irwindale police Sgt. Rudy Gatto said.
The motorcyclist, a West Covina man, was riding east on Arrow Highway just prior to the crash, the sergeant said. A Mitsubishi SUV being driven by a 21-year-old Covina man was making a left turn from westbound Arrow Highway onto southbound Maine Avenue.
“They collided in the intersection,” Gatto said.
Paramedics rushed the badly injured motorcyclist to Los Angeles County-USC Medical Center for treatment, according to Gatto. He was unresponsive, but had a pulse, when transported.
Gatto said the driver of the SUV remained at the scene and cooperated with investigators. There were no initial signs of impaired driving.
The cause of the crash remained under investigation.
All eastbound lanes of Arrow Highway and Live Oak Avenue, as well as the northbound lanes of Maine Avenue, remained closed well into Friday afternoon, causing a significant traffic backup,
Anyone with information can reach Irwindale police at 626-962-3601.

A Covina man died in a Saturday night motorcycle crash on Colima Road in Rowland Heights, authorities said.
The identity of the motorcyclist, described by the California Highway Patrol as a 33-year-old Covina man, was not yet released by coroner’s officials on Sunday.
The solo-vehicle crash took place about 10:40 p.m. on Colima Road, just west of Fairway Drive, Officer R. Finfrock of the California Highway Patrol’s Santa Fe Springs-area office said in a written statement.
He said the man was riding a 2009 Harley-Davidson Softail Deluxe east on Colima, “at a high rate of speed,” when the motorcycle struck the center median.
“The collision with the center median caused (the rider) to be ejected form the motorcycle and the motorcycle to overturn,” according to Finfrock. “At this time, no other vehicles have been determined to have been involved in this traffic collision.”
Paramedics took the injured motorcyclist to Pomona Valley Medical Center, where he succumbed to his injuries at 1:17 a.m. Sunday, Finfrock said.
The crash remains under investigation. Anyone with information can reach the CHP’s Santa Fe Springs-area office at 562-868-0503. 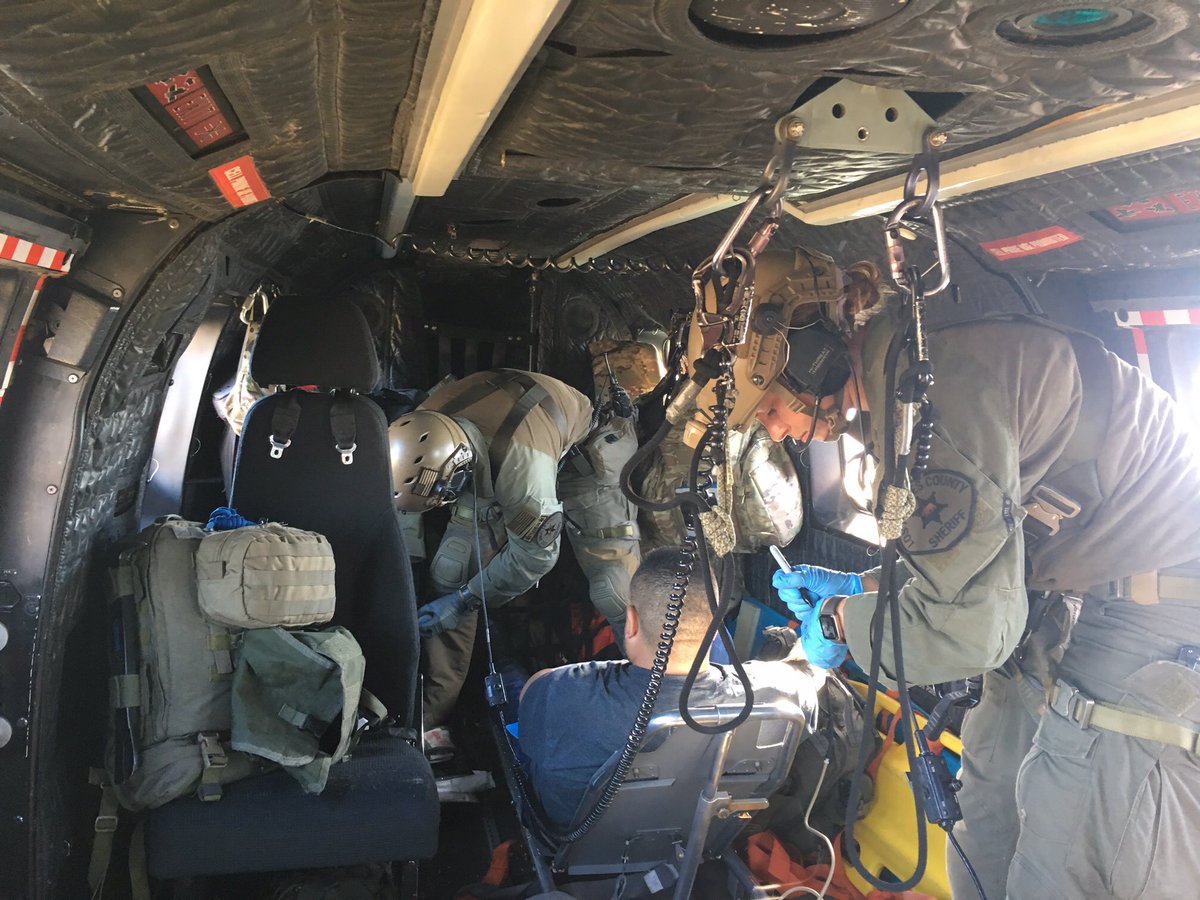 ANGELES NATIONAL FOREST >> Rescuers flew two motorcyclist to a hospital on Sunday after they collided with deer in two separate incidents along Angeles Crest Highway in the Angeles National Forest, officials said.
The collision were reported about 7:50 a.m. near mile marker 48, and at 12:38 p.m. at mile marker 44.37, according to California Highway Patrol Officer Michelle Bond. Both crash scenes are just north of Upper Big Tujunga Canyon Road.
Both men were flown to hospitals by the Los Angeles County Sheriff’s Department’s Air Rescue 5, officials said. Updated on their conditions were not available.
The two similar incidents within five hours on the same stretch of forest road prompted the sheriff’s Special Enforcement Bureau to urge caution via Twitter.
“Slow down & watch for wildlife on Angeles Crest,” read the social media post. “#LASD Air Rescue 5 airlifting rider from motorcycle vs deer crash for the 2nd time today.”
A nonstop series of motorcycle crashes Along Angeles Crest Highway has kept rescuers busy this weekend.
Officials handled at least five injury motorcycle crashes along the road on Saturday, including one that left a 26-year-old Palmdale man dead. 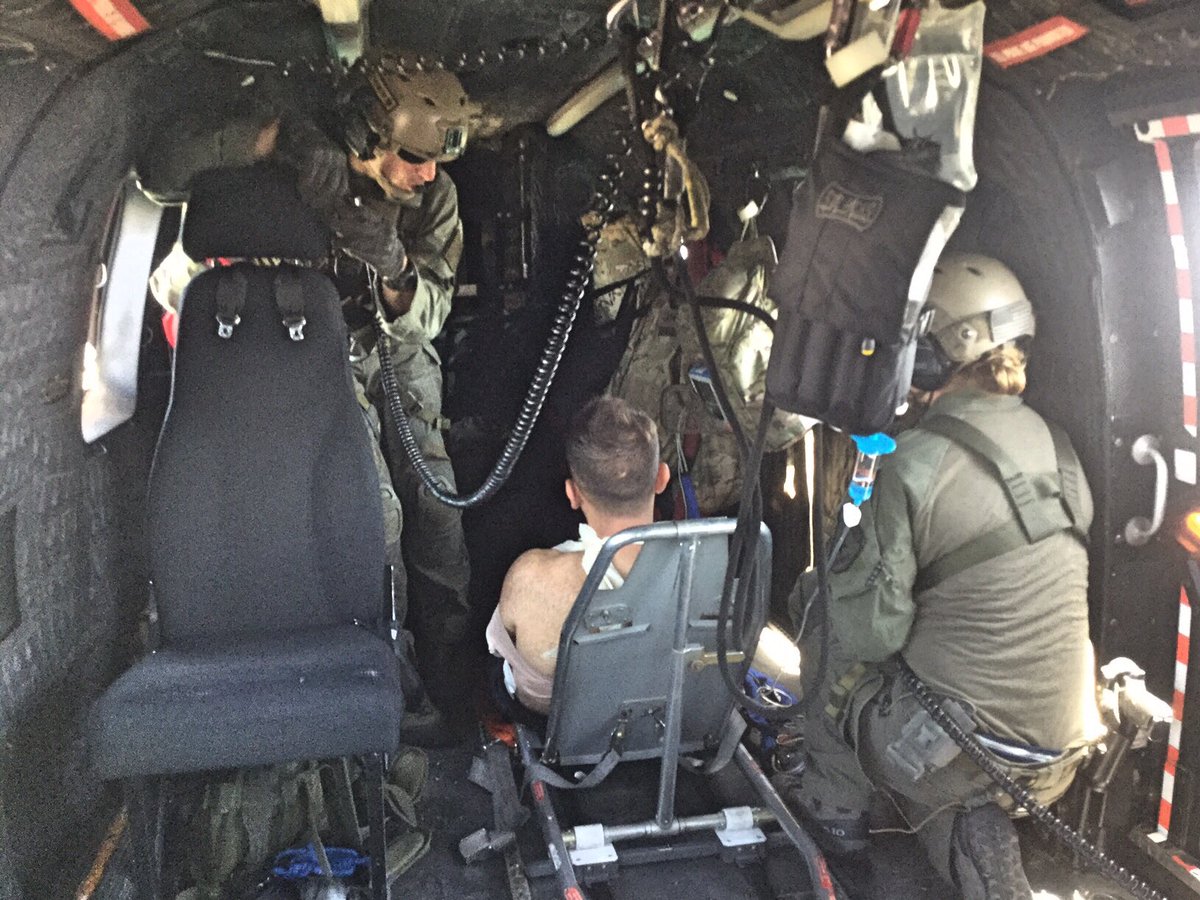 ANGELES NATIONAL FOREST >> A motorcyclist died following a crash along Angeles Crest Highway deep in the Angeles National Forest on Saturday morning, authorities said.
The solo-vehicle crash was first reported about 7:45 a.m. along Upper Big Tujunga Canyon Road, near Angeles Crest Highway, in the forest north of the San Gabriel Valley, California Highway Patrol Officer Peter Nicholson said.
Geyson Armando Rivera Moreno, 25, of Palmdale died in the crash, Los Angeles County Department of Medical Examiner-Coroner Investigator Kristy McCracken said.
He was riding a 2007 Suzuki GSX-R westbound at an unknown speed when, “for unknown reasons,” the cycle crossed over the double-yellow line into opposing traffic lanes, CHP Officer A. Lowery said in a written statement.
“The motorcycle overturned, and (Rivera Moreno) was subsequently ejected,” Lowery said. “(He) collided with the guardrail immediately south of Upper Big Tujunga Canyon Road.”
Alcohol or drugs were not initially suspected as factors in the crash, he said. The investigation was ongoing.
The crash was one of at least five injury motorcycle accidents reported along Angeles Crest Highway on Saturday, officials said.
Any witnesses, or anyone with information, can reach the CHP’s Altadena-area office during normal business hours at 626-296-8100.

PASADENA >> Authorities have identified an Alabama man who died in crash between his motorcycle and another vehicle on the 210 Freeway in Pasadena over the weekend.
Nathaniel John Larson, 21, of Gulf Shores, Alabama, died in Saturday’s 2:30 a.m. crash on the westbound 210 Freeway at Lake Avenue, according to Ed Winter, assistant chief of operations at the Los Angeles County Department of Medical Examiner Coroner.
Larson, initially described by officials as 23 years old, was riding a motorcycle when it collided with the rear end of another vehicle traveling in front of him, California Highway Patrol Officer Stephan Brant said.
Paramedics pronounced Larson dead at the scene, he said. The driver of the other involved car remained at the scene and cooperated with investigators.
The crash is being investigated by officers from the CHP’s Altadena-area office. Any witnesses, or anyone with information, can reach the office at 626-296-8100.

PASADENA >> A man died following a collision between his motorcycle and a car on the 210 Freeway in Pasadena on Saturday, officials said.
The fatal crash took place shortly after 2:30 a.m. on the westbound 210 Freeway near Lake Avenue, California Highwway Patrol Officer Stephan Brandt said.
Initial investigation indicated the motorcle struck the rear of a car traveling in front of it, the officer said.
Paramedics pronounced the rider, described as a 23-year-old man, dead at the scene, he said.
The driver of the involved car remained at the scene and cooperated with investigators.
A Sig Alert was issued for the two right-hand lanes of the westbound 210 Freeway as the investigation continued Saturday afternoon.
Any witnesses, or anyone with information, can reach the CHP’s Altadena-area office at 626-296-8100. 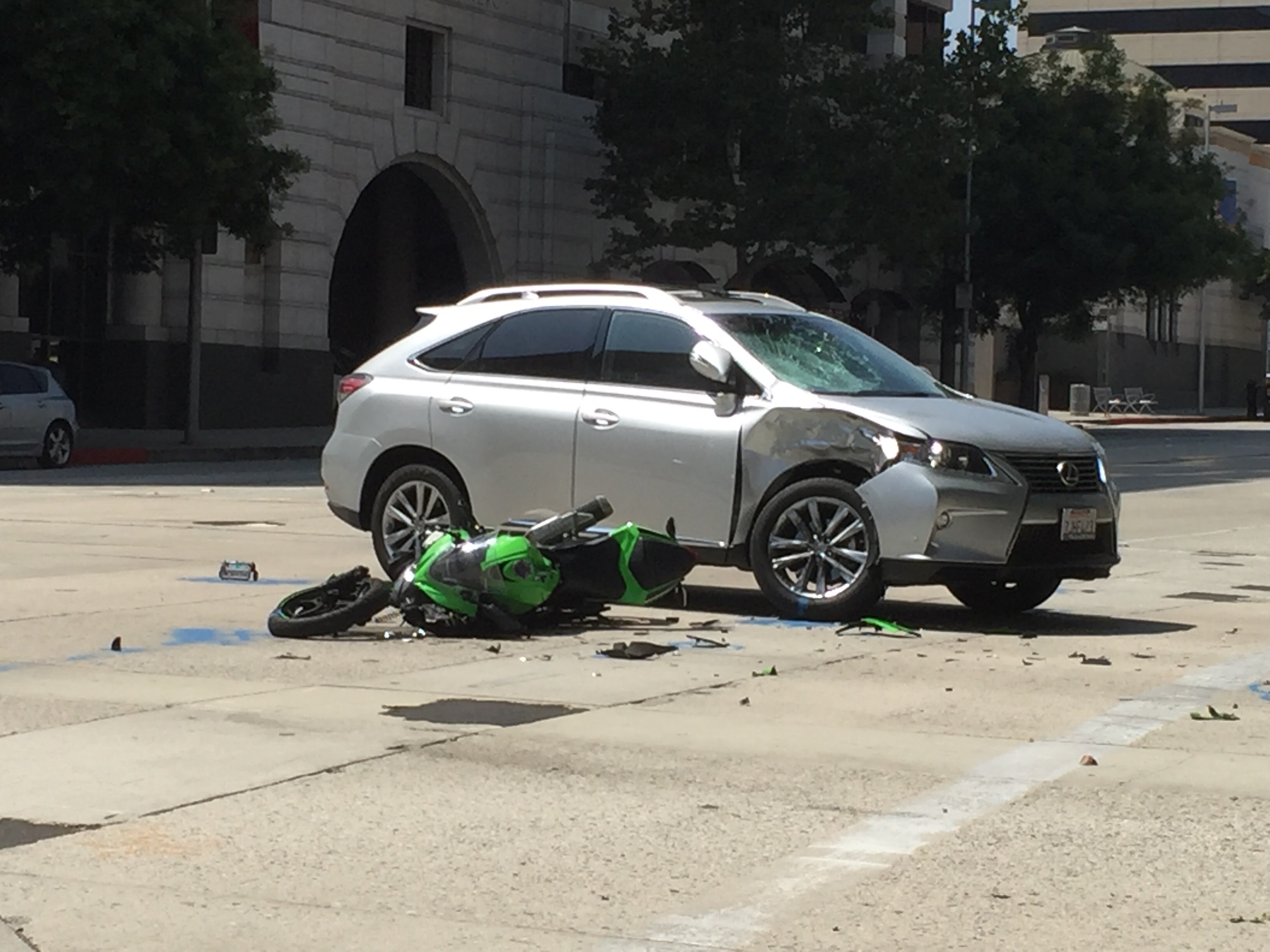 PASADENA >> A motorcyclist suffered major injuries when he collided with an SUV along Lake Avenue in Pasadena on Saturday afternoon, authorities said.
The crash took place just before 1:50 p.m. at Lake Avenue and Green Street, Pasadena police Lt. Javier Aguilar said.
Initial investigation indicated the motorcyclist was heading north on Lake Avenue when he went through a red light and collided broadside with an SUV travelling east on Green Street, the lieutenant said.
Paramedics took the motorcyclist, described only as a man, to a hospital with serious injuries, he said. He was expected to survive.
No one inside the SUV was injured.

ANGELES NATIONAL FOREST >> Authorities have identified a 46-year-old Glendora man who died in a motorcycle crash in the Angeles National Forest north of Azusa.
Jonathan Wayde Shoemaker died at a hospital a little more than two hours after the collision, which took place about 6:18 a.m. on Sunday near mile marker 27.19 of San Gabriel Canyon Road, north of the Morris Reservoir.
He was riding a 2005 Ducati 999 south along the mountain road when a northbound 2000 Honda Civic made an abrupt left turn in front of him while turning into an offroad parking lot, California Highway Patrol Officer C, Strautman said in a written statement.
Paramedics took Shoemaker to Los Angeles County-USC Medical Center, where he succumbed to his injuries about 8:30 a.m., Los Angeles County Department of Medical Examiner-Coroner Assistant Chief of Operations Ed Winter said.
The driver of the Honda, a 40-year-old Montebello man, suffered no injuries, Strautman said. DUI was not suspected to be a factor in the crash, which remains under investigation by the CHP’s Baldwin Park office.

ANGELES NATIONAL FOREST >> A Glendora man died in a crash early Sunday after a car made an abrupt left turn in front of his motorcycle along San Gabriel Canyon Road in the forest north of Azusa, officials said.
Coroner’s officials did not release the identity of the motorcyclist on Sunday pending positive identification and notification of his family. He was described by California Highway Patrol officials as 46 years old.
The crash was first reported about 6:15 a.m. near mile marker 27.19 of the winding mountain road, near the Morris Reservoir, California Highway Patrol Officer C. Strautman said in a written statement.
The motorcyclist was heading north on a 2005 Ducati 999 when a southbound 2000 Honda Civic made “an unsafe left turn into an offroad parking lot, in the direct path of the Ducati 999,” Strautman said. “The front of the Ducati 999 collided into the right side of the Honda Civic.
Paramedics took the injured rider to Los Angeles County-USC Medical Center in Los Angeles, where he succumbed to his injuries, officials said.
The driver of the Honda, a 40-year-old Montebello man, was unhurt, Strautman added.
No arrests were made as the investigation continued, Strautman said. Drugs or alcohol were not suspected to have played a role in the deadly crash.
Any witnesses are urged to contact the CHP’s Baldwin Park-area office at 626-338-1164.