SAN MARINO >> Police arrested two would-be burglars on Thursday night after a San Marino resident saw them trying to break into his home via a remote surveillance camera, officials said.
Police first received a report of the attempted break-in in the 1200 block of Adair Street about 9 p.m., San Marino police officials said in a written statement. A resident called to report two unknown men were trying to get in his home through the back door.
“The resident was not home at the time, but was looking at his surveillance camera online,” according to the statement.
Officers arrived on scene in about two minutes. They spotted a silver Jeep parked across the street from the involved house.
South Pasadena, Pasadena, Alhambra, and Monterey Park police helped their counterparts in San Marino cordon off a search area.
Officers found the two suspects hiding inside the Jeep and took them into custody.
“Pry marks were located at the back door,” according to the statement. Police searched the home but found no additional suspects.
Milton Sandoval Prada, 47, of Los Angeles and Julio Rojas, 46, of Los Angeles were booked on suspicion of attempted burglary and possession of burglary tools.
According to officials and county booking records, both men were being held in lieu of $50,000 bail at the Alhambra Police Department’s jail pending their arraignment hearings, scheduled Tuesday in the Alhambra branch of Los Angeles County Superior Court, officials said. 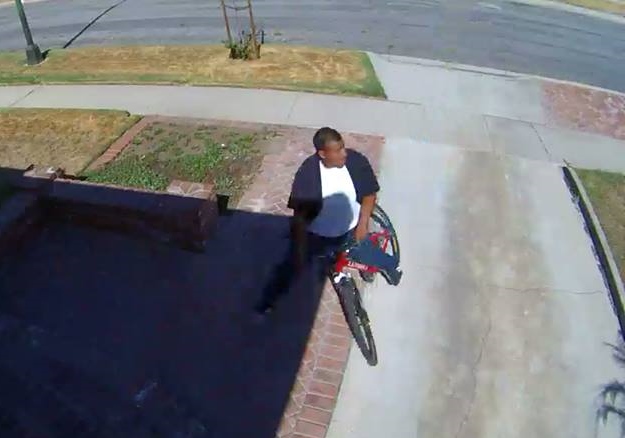 ALHAMBRA >> Police are seeking a bicycle-riding thief caught on camera snatching a package from the front porch of an Alhambra home on Tuesday, officials said.
The crime took place about 4 p.m. in the 1700 block of South Hidalgo Avenue, Alhambra police officials said in a written statement.
“The victim’s surveillance footage recorded the theft,’ according to the statement.
Anyone who recognized the suspect is asked to contact Alhambra Police Department’s Investigation Division hotline at 626-308-4875. Tipsters may remain anonymous.