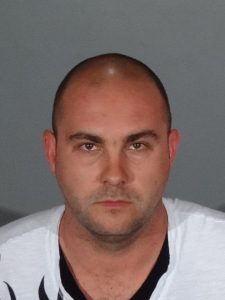 ALHAMBRA >> Police posing as a Craiglist shopper arrested a moving company employee Tuesday after he offered to sell them a Rolex watch stolen from the home of one of his customers during a recent moving job, officials said.
Stanislav Kirsanov, 30, of Sherman Oaks was booked on suspicion of grand theft after police set up a sting operation, Alhambra police Sgt. Edward Elizalde said in a written statement.
A couple called police on Monday to reports several items of jewelry had gone missing from their home as they were moving from one part of the city to another, Elizalde said.
“The couple suspected the workers from the moving company were involved,” he said.
Within days, the couple noticed one of the missing items, a men’s Rolex watch with distinctive markings, was being offered for sale on the online marketplace Craigslist.com.
Posing as a Craigslist shopper interested in the expensive watch, detectives arranged to meet the seller, later identified as Kirsanov, police said.
“Detectives conducted the undercover sting operation in Sherman Oaks and took possession of the stolen watch and detained the person selling it,” Elizalde said.
Police found additional pieces of high-end jewelry, jewelry bags and jewelry cases which they believe were stolen in similar thefts, he said.
Moving company’s Kirsanov was believed to be associated with include Mr. Low Prices, Affordable Movers Co. and Best in the West Moving and Storage, Elizalde said.
“It is possible Mr. Kirsanov may have committed similar thefts while working as a mover for one of the above mentioned moving companies,” he said. “Mr. Kirsanov has used different names in the past and may be known by a variety of aliases.”
Anyone who has hired Kirsanov or the companies he’s affiliated with and noticed items missing are encouraged to contact Alhambra police at 626-570-5157.

This from the Boston Globe:

Police searching the Quincy apartment of Philip Markoff found underwear from two of the victims in the Craigslist attacks and a handgun hidden in a hollowed-out copy of the medical textbook Gray’s Anatomy of the Human Body, according to a law enforcement official with knowledge of the investigation.

The underpants were described as “mementos” from the crimes, according to another law enforcement official, who also spoke on the condition of anonymity. It was not known from which victims the garments were taken, the officials said. Investigators are testing the gun to determine whether the semi-automatic weapon was used to fatally shoot a 26-year-old masseuse last week at the Boston Marriott Copley Place.

Markoff, 23, is a Boston University medical school student whopleaded not guilty yesterdayto charges stemming from attacks against two women in posh Back Bay hotels. Police in Warwick, R.I., say a prostitute who also advertised on Craigslist was attacked in a hotel there last Thursday,but Markoff has not been charged with that crime. No new victims have come forward so far, one of the law enforcement officials said today.

Authorities have said that his alleged crimes may have been motivated by a gambling problem and a desire to dominate his victims.