SANTA ANA >> A Los Angeles man admitted to two felony charges in Orange County on Thursday after attempting to recruit an undercover investigator who he believed to be a teenage girl into prostitution via social media, authorities said.
Michael Joseph Mata, 34, pleaded guilty in Orange County Superior Court to one county of attempted pimping of a minor and one count of pandering by procuring, Orange County District Attorney’s officials said in a written statement.
“Mata is a pimp who exploits women for financial gain,” according to the statement. “With the rise in popularity of social media and ease of meeting people on the Internet, many pimps and human traffickers utilize a variety of social media to locate potential victims,” according to the statement.
Between October and December of 2015, Mata was in contact with an undercover investigator, who he believed to be a 17-year-old girl, online via social media, prosecutors said.
“The defendant tried to recruit the officer to perform commercial sex acts for his benefit,” the statement said. “The defendant arranged to meet with the officer and was subsequently arrested by the Orange Human Trafficking Task Force at the arranged meeting spot.”
Mata was immediately sentenced to three years in state prison.
The case prosecuted by the Orange County District Attorney’s Office’s Human Exploitation and Trafficking Unit. 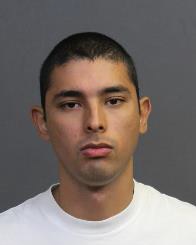 WHITTIER >> A rookie Los Angeles County sheriff’s deputy is accused of molesting a 12-year-old girl he met through an online video game over the course of a year, officials said Thursday.
Costa Mesa police, aided by Los Angeles county sheriff’s officials, arrested Jovanni Argueta, 26, of Los Angeles at a sheriff’s training facility in Whittier Wednesday afternoon, Costa Mesa police Lt. Greg Scott said.
Police first began investigating Argueta Oct. 22 after responding to a report of a “suspicious male” seen on the campus of Costa Mesa Middle School, police said in a written statement. The man had left the campus when officers arrived, but was quickly identified as Argueta, a deputy in the Los Angeles County Sheriff’s Department.
Detectives learned that Argueta and the victim, now-13 years old, had met a year earlier via an online fantasy computer game, officials said.
“Over the course of the year, when the female student was 12 years old, Argueta met with her on numerous occasions,” according to the police statement. “Argueta reportedly performed sexual acts with the girl. Argueta would meet the girl both on campus and away from school.”
Scott said Argueta has been a sworn Los Angeles County sheriff’s deputy for less than a year.
Argueta was hired by the Los Angeles County Sheriff’s Department in August of 2013, Los Angeles County sheriff’s officials said in a written statement. He was assigned to a men’s jail facility.
“The 26-year-old deputy was immediately relieved of duty, pending the outcome of the criminal investigation,” according to the LASD statement.
“We will be monitoring the criminal proceedings closely and will take appropriate and swift action when the outcome of the judicial process has concluded,” the statement continued.
“The Los Angeles County Sheriff’s Department expects all of its members to hold themselves to the highest ethical and professional standards at all times,” according to the statement. “Allegations of this magnitude are disturbing and disappointing. Any proven criminal, or other acts of misconduct that violate public trust will not be tolerated and immediate appropriate remedies will be taken by the Department as permitted by law.”
Argueta was booked on suspicion of child molestation and child annoyance.
Argueta posted $100,000 bail Thursday and was released from jail pending his initial court appearance, according to Orange County booking records.
Anyone with information was asked to contact the Costa Mesa Police Department at 714-754-5281. Orange County Crime Stoppers can also be reached anonymously at 855-847-6227.

This from LA Now:

A security guard working night patrol at the Adventure City amusement park shot and killed a man who had hit him in the head.

The shooting took place at the intersection of Beach Boulevard and Starr Street in Stanton at about 11 p.m. Tuesday, authorities said. The security guard was patrolling the perimeter of the theme park, which is geared toward families and young children.

The guard approached a man in a pickup truck who had stopped at the park’s service entrance, and they began fighting with each other. The man allegedly struck the security guard on the head with “some type of blunt-force instrument,” said Orange County sheriff’s spokesman Jim Amormino.

Amormino said the man then allegedly retrieved an object from his truck “that was at least a couple feet long” that the security guard mistook for a shotgun. The man advanced toward the security guard, and the guard shot the man multiple times, he said. The man was pronounced dead at the scene.

Jurors in the trial of former Orange County Sheriff Mike Carona have reached a verdict, according Thom Mrozak with the U.S. Department of Justice. The verdict will be read at 11:45 a.m Pacific.

Carona, who grew up in Covina, is accused in a massive corruption case that led to the dismantling of his department. We’ll have the verdict when it arrives.

* Cleared on all but one count. This from CBS 2:

A jury Friday acquitted former Orange County Sheriff Mike Carona of all but one count of witness tampering in a lengthy corruption trial against the former head of the nation’s fifth largest sheriffs department.

Carona, 53, who Larry King dubbed “America’s sheriff” after the capture of 5-year-old Samantha Runnion’s killer, was cleared of one count of conspiracy, three counts of mail fraud and a second count of witness tampering.

Witnesses to the hearing described Carona as “shaking and sobbing” when the verdict was read.