LOS ANGELES >> Federal officials on Wednesday arrested the owner and two manager of a chain of four schools, including one in Alhambra, on charges of running a “pay-to-stay” scheme officials allege helped hundreds of foreign nationals remain in the U.S. as foreign students without attending classes.
A federal grand jury returned a 21-count indictment against the three defendants Tuesday, U.S. Department of Justice spokesoman Thom Mrozek said in a written statement. The involved schools are the Likie Fashion and Technology College in Alhambra, Prodee University/Neo American Language School in Los Angeles; Walter Jay M.D. Institute, and Educational Center in Los Angeles; and the American College of Forensic Studies in Los Angeles.
“Given the implications for national security and public safety, we will move aggressively to target individuals who compromise the integrity of our nation’s immigration system out of greed and self-interest,” HSI in in Los Angeles Special Agent in Charge Claude Arnold said. “Simply put, those who exploit the benefits of the student visa program can expect to get a lesson in criminal justice.”
The schools were authorized by U.S. Homeland Security Investigations to sue Certificate of Eligibility for Nonimmigrant (F-1) Student Status for academic and languages students, Mrozek said. The school-issued forms, known as form I-20, made students eligible to obtain F-1 student visas allowing them to remain in the United States.
The schools’ enrollees paid up to $1,800 “tuition” for six months of enrollment, Mrozek said. The schools collected as much as $6 million per year in purported tuition payments.
But HSI officials who made an unannounced visit to Prodee University’s main campus in 2011 investigators to Prodee University’s main campus found only three students attending a single English class, although records indicated more than 900 students were enrolled at the university’s two campuses, Mrozek said. Another inspection the same day as the American College of Forensic Studies turned up a single student sitting in one religion class, officials said. Federal records reflected that the school should have had more than 300 active students.
His investigators also found dozens of purported foreign students, primarily from South Korea and China, who originally entered the U.S. to attend other schools, but transferred to the Prodee Network, Mrozek said. “These students lived across the nation, indicating that they were not actually attending classes at Prodee or the other schools,” he said.
School network owner Hee Sun Shim, 51, of Beverly Hills, who is also known as Leonard Shim and Leo Shim, is charged in the indictment along with alleged co-conspirators Hyung Cham Moon, 39, of Los Angeles, also known as Steve Moon, and Eun Young Choi, 35, of Los Angeles, also known as Jamie Choi, according to the DOJ.
All three are charged with conspiring to commit immigration fraud, Mrozek said. Shim is also charged with 13 counts of use or possession of an immigration document procured by fraud, three counts of encouraging illegal residence and two counts of money laundering.
Moon and Choi are each accused of one count of use or possession of an immigration document procured by fraud.
HSI officials planned to immediately seek withdrawal of the schools’ Student and Exchange Visitor Program certification, Mrozek added.
Any students enrolled at the involved schools were advised to contact SEVP representatives at 703-603-3400 for further instructions, officials said. Information is also available online at the SEVP page of ICE’s website at www.ice.gov/sevis/whats-new. 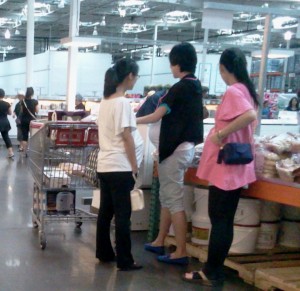