NOTE: This is a story about Matt Fink’s meteoric rise as a college recruit this offseason. But while interviewing Fink, I discovered that Brandon Rohrer has become the Tartans’ new offensive coordinator and is working hard with Fink to put in a favorable offense. LOOK OUT!

There likely isn’t a high school football player around who’s having a better offseason than Glendora quarterback Matt Fink.

When Fink’s offseason started, the all important one between a prospect’s junior and senior year, the goal was to make him more visible on college recruiters’ radars.

Around these parts, Fink is known as the speedy Tartans quarterback with a cannon for an arm and a knack for pulling out close games late. Packaged with his 6-foot-5 inch frame, those talents figured to make him a irresistible target for recruiters.

One problem, though, Fink hadn’t gotten the exposure that other quarterbacks of his stature had because he never played with a travelling 7-on-7 team, which often serves as a showcase for recruiters.

Everything changed, however, in February. Fink participated in the Blue Grey All-American Southern California Regional combine in Ventura. Fink was named Offensive MVP and that week the college offers started to flood in.

“I’m guessing a lot of coaches might have seen that when the Blue Grey put me out as MVP,” Fink said. “It’s kind of a big deal and they looked into me even more. That’s what I think happened. It’s a blessing.”

In addition to gaining more exposure, Fink had an offseason goal of gaining more weight while maintaining his speed. He’s added 10 pounds of muscle and doesn’t feel like he’s lost any quickness.

Fink is in no rush to make a college choice. He says his parents are relieved that they likely won’t have to pay for college. Between now and the end of summer, Fink plans to visit as many campuses of his suitors as possible. Only then will he feel comfortable narrowing the list.

“I’m trying to go to the schools and tour the campuses,” Fink said. “I’m going to make a list and I’ll post it on Twitter saying these are my top-five choices. I have to see all these places before I can put a down or make a list. This summer is going to be big. I’m going to be very busy this summer.”

As for getting ready for Glendora’s upcoming season. Fink has been working hard with new offensive coordinator Brandon Rohrer, who most area fans will remember for recent head coach stops at La Puente and Etiwanda.

With Fink’s stock rising so high, the pressure will be on to produce a senior season at Glendora worthy of a top-shelf quarterback recruit. 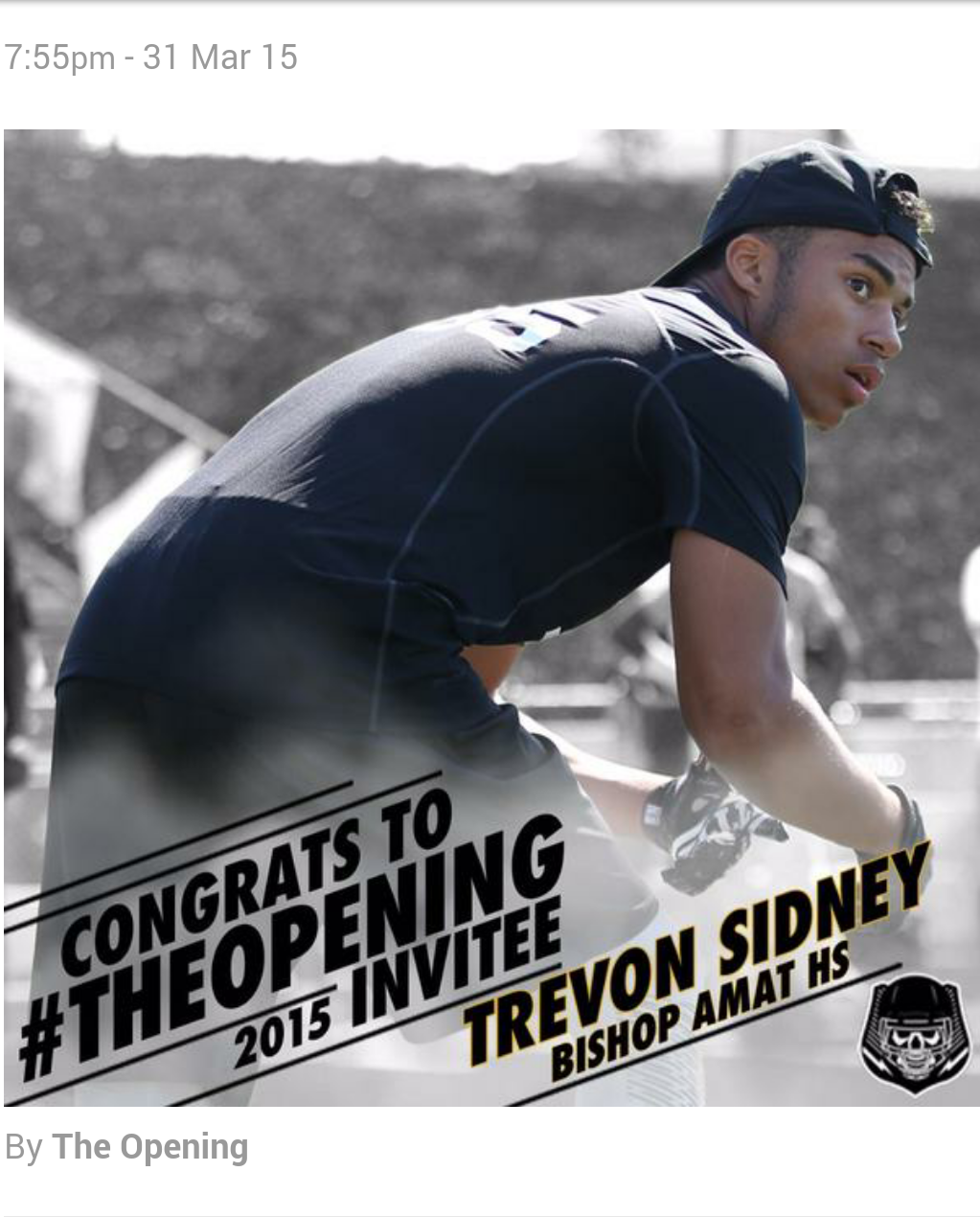 Already one of the country’s top recruits at corner back, Bishop Amat High School football standout Trevon Sidney wanted to use this offseason to showcase to college recruiters what he can do with the ball in his hands.

Sidney, the Tribune’s 2013 Newcomer of the Year after picking off 10 passes as a sophomore, and a 2014 All-Area selection at defensive back, prefers to play receiver. Both now and in college.

The gamble to showcase his prowess catching balls at the expense of developing further at corner has already started paying off.

Also at receiver for Body By Tra is former St. Francis standout Dylan Crawford who hopes to play his senior season at Santa Margarita. Crawford has multiple college offers. Charter Oak’s Zion Echols, a running back for the Chargers, also is part of the receiving corps.

But at the end of the day, there was Sidney holding the Offensive MVP honors. It’s something he hopes to parlay into more snaps at receiver this fall while playing with the Lancers.

“That’s the purpose of doing receiver,” Sidney said of his award. “That’s pretty much my position. I play corner because they need me to at Amat, so that’s why I play it.

“But my main position is receiver and that’s what I’m trying to get across. It seems like it’s working.”

Sidney has multiple next-level offers, but some of them are solely to play defensive back while others are for receiver. According to Sidney, his offers from USC, UCLA, Washington and Michigan are all to play receiver. He will play either position, though, if needed.

Last season at Amat, Sidney was third on the team in receiving with 38 receptions, 540 yards and three touchdowns. Sidney shined as a kick returner and had 47 tackles and four interceptions while on defense.

“I’m just trying to show I can play receiver, too,” Sidney said. “Recruiters are starting to open up a little more to me playing receiver. We’ve practicing a little bit (at Amat) and at practice I’ve been starting to go more to receiver. It looks like I’ll be playing more on the offensive side this year.”\

Sidney’s strong offseason has also earned him an invite to “The Opening”, a Nike-sponsored invite-only training camp this July held at University of Oregon. The event is for what’s considered to be the top 162 high school football players in the country.