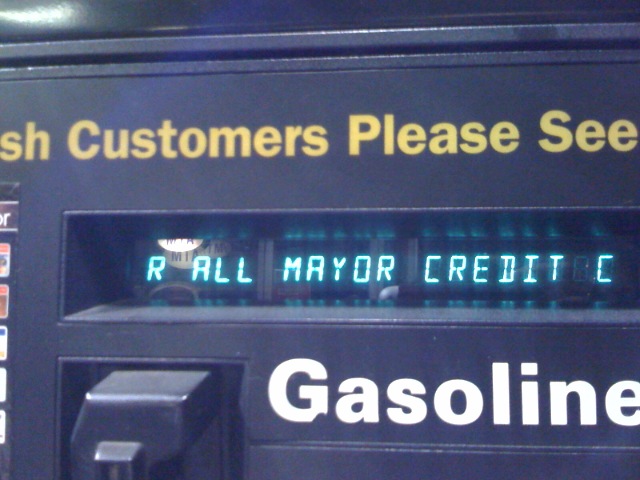 I stopped for gas last night at a 76 station on Myrtle Avenue in Monrovia (FYI, it took about $55 to fill up my little Hyundai Elantra with gas….)

As I was waiting there, while my gas was pumping, I noticed a peculiar thing on the electronic credit card screen: “ALL MAYOR CREDIT CARDS ACCEPTED”

Baldwin Park Councilwoman Marlen Garcia has some serious concerns about the city’s Chamber of Commerce:

BALDWIN PARK – A councilwoman wants to rescind the city’s membership in the Chamber of Commerce, citing growing concerns about how the group is run.

Marlen Garcia – who has served as the city’s representative to the chamber for about eight years – said the group struggles to be self-sufficient and engages in activities that could potentially expose it to litigation.

Garcia also said she has received complaints from business owners that the chamber does not provide them with the support they need.

“A lot of things are happening that are going to expose the chamber to some legal issues,” she said. “It seems like they can’t get their act together.”

“That’s her opinion,” said Jose Barrera, the chamber’s vice president. “Everybody is entitled to their opinion. We have close to 300 members. Believe me, if something was wrong with the way we treat our members, we wouldn’t have that many members.”

At a June 18 City Council meeting, Baldwin Park business owner and chamber member Greg Tuttle – who is also spearheading a recall against Garcia and two other council members – accused Garcia of threatening to disband the group, and take it over.

Garcia said the claims were false.

Barrera, who was at that informal meeting in which Garcia wanted to discuss a personnel matter she felt was mishandled, also said Garcia did not threaten Luevano.

But, Barrera said, Garcia did accuse him and Luevano of being unqualified.

“She was upset,” Barrera said. “She straight out was very disrespectful … She insinuated she was going to the have the council come in and supervise (the chamber).”

Because the chamber is a non-profit organization and does not receive a subsidy from the city, Barrera said the council really has no say in the chamber’s actions.

Garcia said about two years ago the city loaned the chamber $10,000. They have since paid back that debt.

Still, Garcia worries the chamber may not have the funds to continue in the future.

“This chamber has had a tainted history,” Garcia said, adding that she believes it may be time to consider some kind of new association for businesses.

“I think the Baldwin Park Chamber has a negative connotation to it,” she said. “Let’s hear from the rest of the community. If they want to start up a group, as a council, we’ll sit back, listen and hear what they have to say.”

School officials are considering reprinting a yearbook that contains a racial prank, Amanda Baumfeld reports. The update comes one day after Baumfeld reported that the yearbook at Charter Oak High School in Covina contains fake names under the Black Student Union photo – such as “Tay Tay Shaniqua,” “Crisphy Nanos” and “Laquan White” – next to the club photo in the school’s 2008 Chronicle, according to Superintendent Clint Harwick.

Baumfeld said that in one of the first calls she made, the school administrator said, “I don’t see why the paper would be concerned about this.”

I wonder if the administrator gets it now, considering today it is a national story.

The MTA delays action on the Gold Line extension, Dan Abendschein reports. He also has more to say on his blog, Under the Dome.

After checking out the newest site for a health care facility at 612 W. Shorb St. in Alhambra, I decided to drive down Valley Boulevard through El Monte before I jumped on the 10 freeway.

It is amazing to me how many thriving Asian shopping centers there are in Alhambra, the number of new developments sprouting up in Rosemead, and the variety businesses on the street.

One such business that I spotted sold the Vietnamese snack, Balut, which is a fertilized duck (or chicken) egg with a nearly-developed embryo inside.

This is just one of the many businesses in the Rosemead area that cater to the Asian population area in the city and surrounding areas.

Another business in Rosemead, though not on Valley, is Cal Poultry, at 8942 Garvey Ave. The business slaughters and sells whole chickens and duck.

It is the only slaughterhouse in the city, but officials are anticipating more public discussion on Cal Poultry very soon. While Cal Poultry has been a staple in the community for more than 20 years, it is out of compliance with the city code, and now Cal Poultry owners are pulling permits so that they can continue to operate. Look for that story next week.

The District Attorney’s office has filed a notice of appeal on the Carlos Thrasher case.

More to come next week.

In the meantime, here’s a story from a few months ago:

POMONA – A judge dismissed charges of perjury and conflict of interest Tuesday against a former West Covina planning commissioner.

Kevin McDermott, Thrasher ‘s attorney, said the prosecution had no case because it could not show Thrasher intended to deceive the public by not disclosing a debt to local developer Ziad Alhassen.

“I could see if we were talking about a political committee fining him,” McDermott said. “But when you are talking about perjury, you need to show the person was clearly advised ahead of time, and deliberately ignored that advice.”

Thrasher , a local businessman and Iraq War veteran, was accused of failing to disclose that he owed money to Alhassen before a vote on one of Alhassen’s development projects.

He had received a letter from West Covina city attorneys advising him that the $17,166 debt he owed Alhassen did not qualify as a loan, which would have required disclosure. The City Council later approved, in a 4-1 vote, paying for Thrasher ‘s legal fees.

Councilman Steve Herfert, who has long supported Thrasher , said despite the dismissal, the victory is bittersweet.

“All those cases were a lot of waste of time and money,” Herfert said.

He added that Thrasher should never have been charged in the first place.

McDermott said he thought it was a strong possibility that the county would appeal the case to state court.

Thrasher owed the money as back rent for an office he was renting from Alhassen. Thrasher had left the country to serve in Iraq but still was using the office, according to Alhassen’s testimony in the preliminary hearing. Thrasher signed a promissory note agreeing to repay the debt to Alhassen at the rate of $500 a month, records show.

The complaint about Thrasher ‘s lack of disclosure came from Alhassen’s attorney, after Alhassen’s South Hills Homes Partnership requested a time extension to build a gated community in a cul-de-sac known as Inspiration Point.

Alhassen testified at the preliminary hearing that the decision cost him millions of dollars. He said on Tuesday that he had no comment on the dismissal.

West Covina has had sometimes contentious relations with Alhassen, who has had extensive development deals with West Covina’s redevelopment agency.

In 2006, the city filed a lawsuit against Alhassen alleging that he was in breach of contract over a 1999 deal in which the city gave the developer $4.1 million to renovate his Clippinger Chevrolet dealership.

The city won the lawsuit, Alhassen appealed, and last month, his appeal was denied by a state appellate court.

Alhassen also countersued the city after the lawsuit, but that case also was thrown out.

After voting against an extension for Alhassen’s South Hills project, Herfert was investigated by the District Attorney’s Public Integrity Division for a possible conflict of interest. Charges were never filed against him.

Herfert said he thought that Thrasher ‘s reputation had suffered as a result of the charges.

“He pretty much volunteered his time and ended up facing felony charges,” Herfert said. “It’s good the case was dismissed, but with that negative information out there it was hard for him in the community and running his business.”

I just got off the phone with Deputy DA Jonlyn Callahan, who told me she will likely be in court for the next week five weeks working on the trial for this guy…..

LOS ANGELES — A politically powerful appointee in former Mayor James Hahn’s administration was accused of bribery in the first charges to be filed against a public official in a three-year investigation into City Hall corruption.

The investigation followed allegations that Hahn supporters shook down companies seeking business with the city by trading contracts for political contributions. Hahn, who lost his re-election bid last year, has not been implicated and has denied knowledge of any wrongdoing.

Leland Wong, 49, pleaded not guilty Wednesday in Superior Court to charges of taking $100,000 in bribes to help a Taiwanese shipping company get more space at the Port of Los Angeles.

MONROVIA – A Monrovia police officer has filed a lawsuit against the city alleging he was harassed and retaliated against for cooperating in a previous racial discrimination case against the Monrovia Police Department.

Matthew Donald Thompson said he provided statements supporting the claims of racial discrimination and harassment filed by Glenn Cobb, a former Monrovia police officer who sued the department in 2006.

Cobb settled with the city, which admitted no liability, in November 2007.

After Thompson submitted a written statement detailing the harassment that Cobb was subjected to, the complaint says, he was himself harassed by the city and the police department.

Thompson says he was unfairly placed on a work contract shortly after his involvement in the Cobb investigation. Later, when he went on medical leave, the complaint alleges he was denied workers compensation benefits and was forced to take unpaid time off.

An amended complaint to Thompson’s lawsuit, originally filed in March, was submitted to the court on Monday.

I posted this on our Web site a little but earliler…..

Police say they intend to follow-up of the results of a toxicology report before resubmitting the case to the Los Angeles County District Attorney, Baldwin Park police Lt. Jospeh Cowan said.

The case stems from a May 22 arrest in which Corona was Tased by police after allegedly breaking the windows of a home. According to a police report, Corona admitted to having smoked methamphetamine and marijuana earlier in the night.

Cowan would not divulge the details of the toxicology report or the charges that the police department wanted to file against Corona. He did say, however, that they want to confirm with the laboratory “the presence and quantitatve analysis of certain controlled substances.”

Cowan said he expected to re-file the case with the district attorney next week.

I tried getting Corona’s mug shot from Baldwin Park PD but Cowan told me they weren’t going to release it yet. Then I tried to get it out of the Sheriff’s Department.

They called Cowan for permission….so it looks like we won’t have access to that mug untll after sentencing, if the case even gets that far.