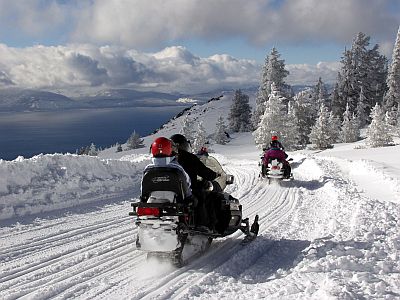 Powering through the snow, we entered a washed out world of grays and off-whites. We felt as if we were riding in the clouds, which we were, cruising at 9,000 feet in the crisp, cold air of the High Sierras.

Some riders were disappointed that we wouldn’t be able to see the crystal blue waters of Lake Tahoe below us, but the surreal scenery made me glad that we had taken a day off skiing to try this snowmobile tour with Zephyr Cove Resorts.

The gray mist even muffled the sounds of the powerful snow machines. We glided silently through the High Sierra glades.

The towering pines looked like pieces of art, decoratively layered with crisp, white snow. It seemed more a dream than reality.

After a week of skiing and snowboarding in the many resorts around Tahoe, we were ready to try something different. Maybe even a little less strenuous to give our sore muscles a chance to rest.

Everyone agreed on snowmobiling, so we checked out the tours available from South Lake Tahoe and picked Zephyr Cove Resort. The tours leave from the resort, which is only four miles into Nevada from the state line.

The package includes a hotel shuttle from South Lake Tahoe. We opted for the two-hour lake view tour, though with the reduced visibility we never saw the lake. The company says that it offers the only lake view trails on the South Shore.

It also claims to be the largest snowmobile tour center in the United States. And after seeing its a fleet of 90 late model Yamaha and Ski-Doo snowmobiles, I would agree.

Our guide said these were state-of-the-art machines worth more than $10,000. Yikes! The sleek snowmobiles even had hand and thumb warmers. Yeah!

And unlike the older snowmobiles that I’m used to driving, these boasted four-stroke engines so we wouldn’t be breathing oily smoke from the exhaust.

Our guides said these touring machines offered superior performance even with two riders. That’s great for couples who want to ride together, though there is a combined weight limit of 400 pounds.

Just a quick note to save money, children 15 years old and younger ride behind you for free on some days, so be sure to check their schedule. Which is good, because you have to be 16 to drive their snowmobiles. And those under 18 must have written consent from their parents.

Rates are $119 for single riders and $159 for doubles. But check the rate for the day you select.

Nobody in our group wanted to ride double, everyone wanted to drive their own machine. So, our tour guides gave everyone a quick lesson on how to operate the powerful machines safely.

The sleek tourers were easy to drive, squeeze the throttle lever with your thumb to take off, squeeze the brake lever on the opposite handlebar to slow down. Try not to do both at the same time!

The guys wanted to drive really fast, but our guides pointed out that this was a scenic tour not a racetrack. Besides, the two-way trail had oncoming traffic so everyone had to stay in line behind our tour guide. And you didn’t want to go off the packed trail and bog down in the heavy snow.

Still, the guide set a quick pace. Fast enough to give us city slickers a thrill, but slow enough to let us maintain complete control. Every once in a while, we’d stop for a breather and our guide checked to see if everyone was doing OK.

Climbing the mountain on these sleek sleds was fun, sliding through the aspen groves and up some steep pitches.Finally, we reached the top, but the biting wind kept us from lingering. We wanted to get back in the treeline, where the towering pines sheltered us from the storm.

On the way back down, we stopped at a rest stop for some hot chocolate. Everyone’s face was flushed from excitement, especially those who had forgotten to bring their ski masks.

Soon our High Sierra adventure had come to an end. And everyone was ready to return to the slopes for another day of skiing. But our Zephyr Cove retreat had been a restful dream. Sliding through a fantasy world of black and white.