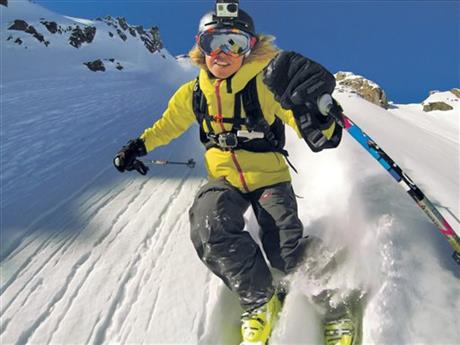 A GoPro digital camera is mounted on a ski helmet. The camera is a hot item on ski slopes and other settings. (GoPro photo via Associated Press)

Hey, mom, did you see that cool jump? That explosion of powder? How I squeezed between those trees?

There are moments on the slopes when skiers wish all eyes were on them. But here’s the next best thing: helmet cameras, which enable skiers to photograph and videotape their own descents, jumps and tracks to show off later.

Helmet cams have become so ubiquitous that they are “almost the norm” at Steamboat Ski & Resort in Steamboat Springs, Colo. “The cameras take bragging rights to the next level,” said resort spokeswoman Loryn Kasten.

Steamboat is even incorporating user content into its own social media and marketing, because the vantage point of the skier or boarder taking video has more impact than the pro cameraman standing at the bottom. The user videos, Kasten says, are a “scrapbook in motion.”

A new teen center at a members-only resort will even have indoor video editing booths and a screening room to play footage and finished films for a crowd.

The teen center is part of a new lodge at The Hermitage Club at Haystack Mountain in Wilmington, Vt. Hermitage owner and founder Jim Barnes was inspired by the interest of his own children — ages 16, 14 and 9 — in using the cams.

But the cameras are not just for kids. Barnes recalled a 40-something who took video of 47 runs during a single day last season.

“Each generation pushes other generations to do it. Gen-Xers are sharing, and Gen-Yers and Z. There’s a push for all of them to use cameras because they’re going to share it,” said Kelly Davis, director of research for the SnowSports Industries America association.

“Sharing” is the key: The explosion of social media is what’s led to the leap in cameras among skiers and boarders — not to mention surfers, skate boarders, rock climbers and mountain bikers.

“The cameras seem to be driving people to do more adventurous things, explore the back country, so they can share it,” said Davis. “It’s not just ego. But people are aware that they are presenting an image of themselves, and videos of them doing this stuff starts conversations.”

Even older skiers who don’t use the cameras are watching the footage. “My grandma loves to see the video. She got them for us so she can see us skiing,” said Will Coffin, a 13-year-old member of Vermont’s Mount Snow race team. “And I don’t ski with my parents much, so sometimes I’ll show them, too.”

His 11-year-old brother Charlie will show them “to anyone who’s there after skiing.” Most likely his videos are off-trail in the trees, which he thinks makes the best visuals. The Coffin videos will occasionally go up on YouTube, and they’ll watch the ones their friends make.

Sales of the cameras, like the industry leader GoPro, were up 50 percent to 123,000 at snow sports retailers for the 2012-13 ski season, according to the Sports Industries Association. The trade group expects a higher number for 2013-14, with additional sales at electronics stores and elsewhere that the SIA does not track.

GoPro sells its HD Helmet Hero Plus 3 model for close to $400, but the price has not deterred impulse buyers who see others using it and must have one.

“Veteran skiers are looking for the best deal, and might get their GoPro in an off-season sale,” said Kasten. “But it’s also not farfetched to say, a family will come into one of our retail outlets and tell us, ‘We’re using our iPhone for video, but we just saw someone else’s video'” shot with a GoPro. Often they’ll buy one on the spot.

Jonathan Harris, GoPro’s vice president of sales, thinks this season will see more groups collaborating on videos, divvying up camera angles and pooling footage. “As a kid, I loved watching Warren Miller ski movies,” he said, referring to the annual snow sports films beloved by skiers and boarders. “You wished for a way to do that, but I didn’t have a camera crew waiting for me at the bottom of the run. Now with $400 — boom! — you are out there getting your own movie.”

Wing Taylor, 42, who lives in North Vancouver, British Columbia, uses his GoPro mostly to record keepsakes of the days when his children are still mastering the mountains, but he’ll also play them on gray fall days to get his son and daughter jazzed for the season.

“I will also share the videos at my kids at work. Who doesn’t like an audience to say, ‘Look at my kids. They’re awesome!'” he said. And with just the right camera angle, the jump of a 6-year-old can look a lot bigger than it really is.

If you’re hanging at the Taylors’ house, you might watch the videos on their flat screen. “We can pick ‘home movies’ on our Apple TV, and for us, home movies are ski movies.”

The only downside, Taylor says, is the audio. There’s a lot of loud “schussing,” which he typically fixes up by dropping in music on the final cut.

Noah Shelton, 14, of Cary, N.C., says the camera lets him relive happy or proud moments: “You can capture the beauty of the nature around you, but if you’re a freestyle skier or boarder, you’re really doing it for the crazy jumps and flips.”

Sometimes, he’ll move the camera from his helmet to his back or pole to try and get the look on his own face or others around him. “When there’s a good jump, the reaction of other people is priceless.”

Nick Skally, 36, of Portsmouth, N.H., likes to record the tips of his skis popping in and out of the powder. “It’s so much fun to see where you’ve gone,” he said.

Cameras have become so lightweight, low-profile and easy to use that Skally sometimes forgets it’s on his helmet and wears it into the lodge still recording, which makes for some funny outtakes.

But the main reason for the videos, he says, is “to remember the epic runs, the powder dumps, the good times. If the memory fades, the video doesn’t.”