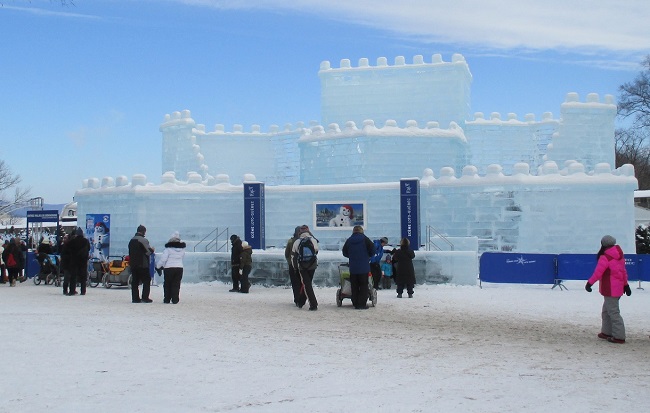 Bundled up in several layers of clothing, we braved the single-digit temperatures for a sled ride down an ice track, a round of bumper rafts on ice, a drink of caribou at the ice bar, and a walk through an ice castle. We even made our own “maple-sicles” in the snow.

It’s all part of Carnaval de Quebec, a 17-day long celebration of all things snow and ice. Quebec City, like much of the northeast in early February, was in the grip of a deep freeze, but that didn’t keep families from bundling up in their snow gear for some winter fun.

Christian, a native Quebecer there with his two children, the youngest he was pulling around in a sled, joked, “We have to do something in winter.”

The carnival is spread across the Plaines D’Abraham just outside the old walled city. In addition to the rides, food, music, snow sculptures and events at the Plaines, parades, concerts and races take place throughout the city. 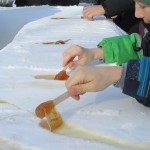 The first thing you notice – and can’t miss – at the carnival is the large ice palace, a tradition going back to the first carnival in 1955. As you go from room to room, you can lounge in an ice chair, check out the ice bar, and explore ice tunnels (for kids, except for one parent we watched crawl in to retrieve her wayward toddler).

Then there are the beautiful to fantastical snow sculptures. The international snow sculpture competition has been part of the carnival since 1973. Sculptors from around the globe come to Quebec to create these intricate and realistic works of art. A trail winds among the sculptures so you can view them from all sides.

Being Canadians, of course there’s a small hockey rink, where kids can grab a stick and join in. There’s also ice fishing, dogsled rides, a tubing hill, and bumper rafts, where you just sit back and enjoy the spin as the boats (on wheels) are pushed around the ice. And what’s a carnival without food and drink? We tried the make-your-own maple pop and caribou. To make a traditional Canadian maple pop, a foot-long strip of warm maple syrup is poured on top of snow, and you take a popsicle stick and roll the slowly hardening syrup around the stick. As for caribou, with a name like that how could we resist? Caribou is made with Canadian port, vodka and brandy and is served warm – perfect on a frigid winter day.

The carnival concludes this weekend. Special events include the night parade and after-party, a sleigh race, and the crazy snow bath. 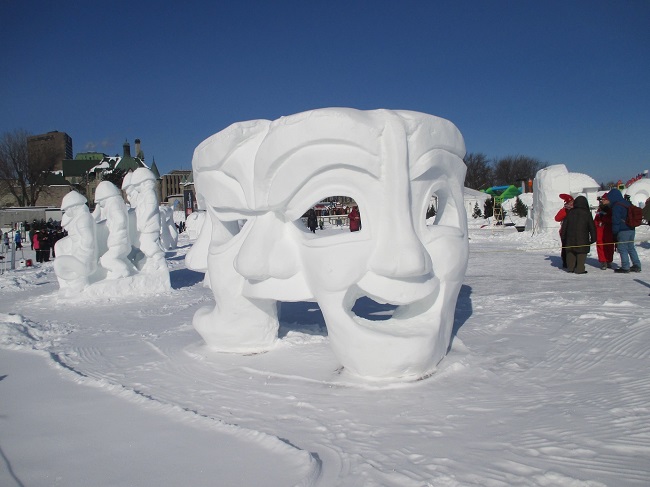