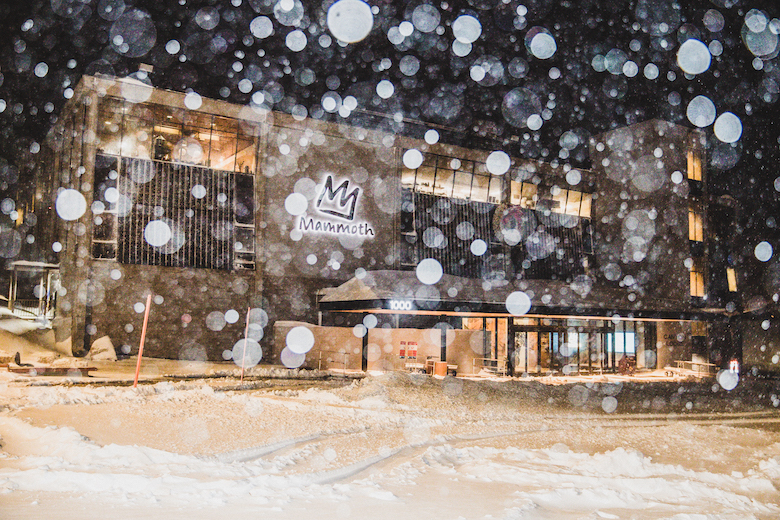 Looking for fresh powder for skiing and snowboarding? Mammoth Mountain has it. Lots of it.

The resort received 4.5 feet of new snow at the summit and 3 feet at Main Lodge thanks to a productive storm that passed through the Sierra Nevadas over the weekend.

And that’s only part of the story.

Weather.com predicts Mammoth Mountain will receive snow or snow showers during six of the next 10 days — certainly adding to the resort’s 60- to 80-inch base.

“Crews are working diligently to safely open terrain, but it will take some time with that amount of snow,” says spokesman Tim Lyman. “Check the Mammoth Mountain website for real time terrain updates.” 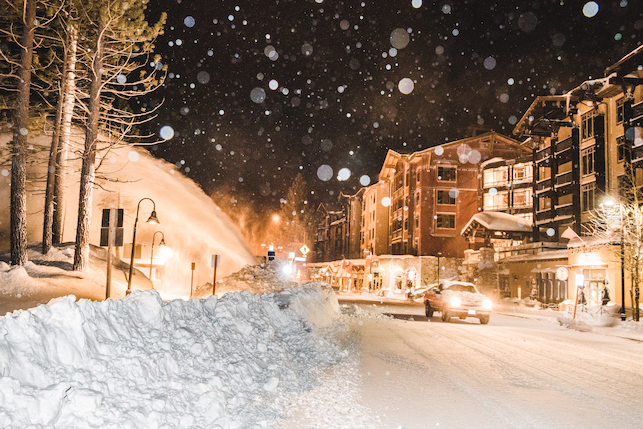 It’s a winter wonderland of white on the streets in Mammoth. (Photo by Peter Morning/Mammoth Mountain Ski Area) 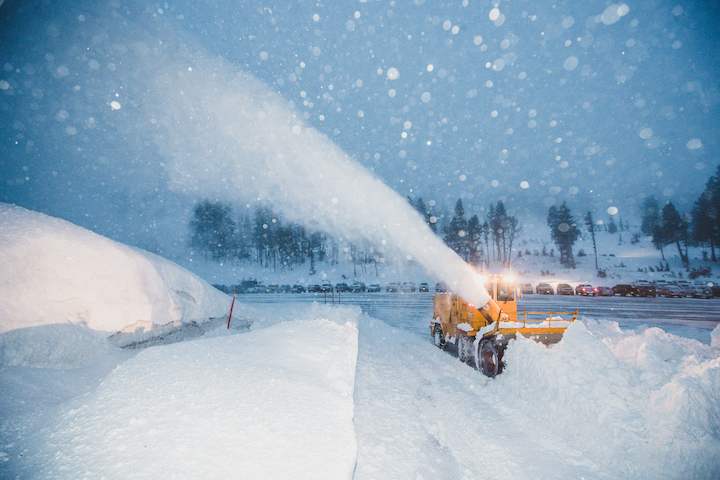 Roads are being cleared of snow. (Photo by Peter Morning/Mammoth Mountain Ski Area) 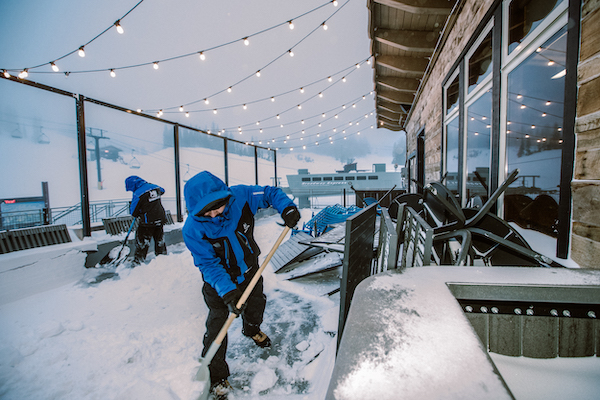 Workers are busy shoveling snow at the lodge near the Broadway Express chairlift. (Photo by Peter Morning/Mammoth Mountain Ski Area) 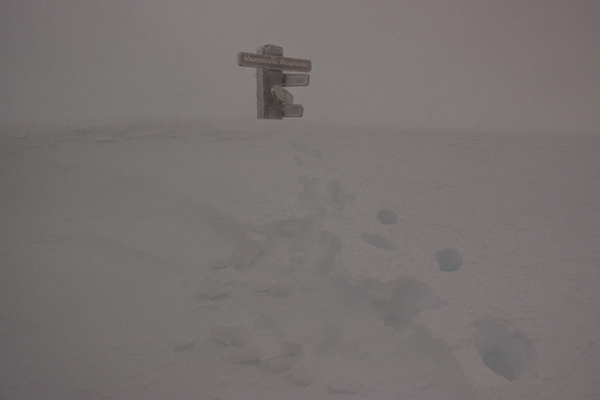 December has been good to Mammoth! With nearly 5 feet of fresh snow falling this month Mammoth is set to open all of its base areas today (Canyon and Eagle lodges) and new terrain, including chairs 8, 15,16 and 17.
In total, Mammoth now has 18 chairs open, servicing 80 trails, the most in California by some margin.

Some great action shots by Kevin Westenbarger from the weekend’s storms are available here. Also have some good video shot yesterday here.

This is all good news for last-minute holiday travel planners. Night of Lights on Saturday is a can’t miss Eastern Sierra tradition and NYE at Mammoth can be celebrated a number of ways, with programming for both Familes and Party Animals.

The storm gates have officially opened and the season is underway here at Mammoth Mountain! It received 13-22 inches of sweet, sweet snow with a storm that rolled in yesterday and there’s more on the way.

Conditions up there are awesome and they’re just getting better. Want to be the first to know when it snows? Sign up for our Fresh Snow and Dump Alert emails here.

Mammoth is currently getting hammered by a system that’s likely to leave between 2-3 feet of fresh on the summit when it’s all said and done.

Also, Mammoth is offering a snow guarantee good for bookings by Dec. 15. It’s pretty straight forward, if the base depth isn’t at the required level, guests get the option of a $100 gift card or the ability to move the reservation dates with no fees or penalties. Though with all this snow, shouldn’t be much of an issue! 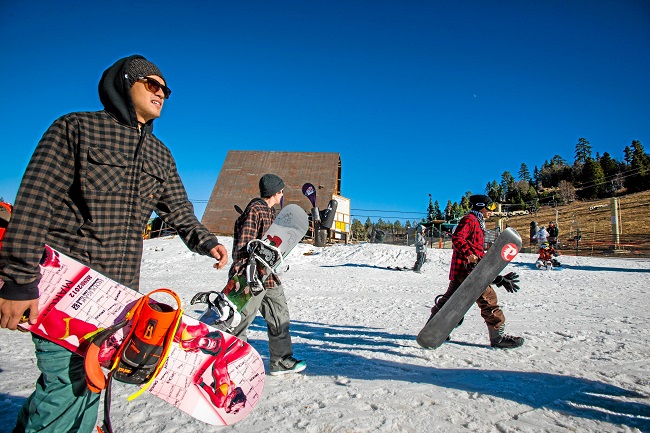 Snowboarders look to head up the chairlift at Bear Mountain Resort in Big Bear Lake, Friday, November 28, 2014. California is suffering one of the worst droughts in its history. (Eric Reed/For the Sun)

Ricky Vega held his 3-year-old daughter, Brooke, steady as she stood atop a snowboard, feet buckled securely in bindings, at the Bear Mountain ski resort on Friday,

Vega positioned his daughter in place, in a safe area at the bottom of the slope, away from the throng of snowboarders zipping down the mountain. He whispered a few words of encouragement in her ear, then gave her a gentle push forward. He darted forward, several feet ahead of his daughter, then turned and held out his arms to receive her.

Clad in pink ski pants, a pink ski jacket and a knitted Curious George ski cap, Brooke was all smiles as she slid about five feet across the slope and into her doting father’s arms.

“My two nephews started doing this when they were 3, and now it’s her turn,” said Vega, 36, of Lakewood. “We’re trying to make it a family tradition.”

Vega was one of hundreds drawn to Bear Mountain on the cloudless and rather warm Black Friday for the resort’s opening day of the season. Neighboring Snow Summit opened for the season on Wednesday.

“It’s awesome. It’s beautiful weather,” said Vega, who along with his twin brother owns a cabin in Big Bear Lake, where he and his family spent the Thanksgiving holiday before taking to the slopes on Friday.

“I’m on vacation. It’s opening day,” Vega said, “and I wanted to get out here before all the snow melted.”

The two opening-day events, at Bear Mountain on Friday and Snow Summit on Wednesday, marked their first under new ownership by Mammoth Mountain Ski Area, which announced its purchase of the sibling ski resorts in September. The sale awaits the closing of escrow, said Rio Tanbara, director of marketing for Bear Mountain.

Mammoth Mountain’s 2014-15 season is now underway, but many are still recovering from an amazing opening weekend at Mammoth.

They put together a quick video edit of the festivities on and off the hill, which you can find here.

This weekend new terrain including Discovery Chair, Facelift Express and Thunderbound Express are set to open, providing access to Saddlebowl, Sesame Street and Lower Main Park, with more on the way.

Dust off your skis and snowboards, call your friends, and start this season off right. Mammoth Mountain is kicking off opening day on Thursday with its traditional Broadway Express banner breakthrough and annual beer toast. Enjoy live music, food, and drinks on the Main Lodge sundeck during the day, contests in the park and more.
​

11am – Hang out in Main Park featuring the Mophie Jam, 32 TF debut, DJ in the Monster DJ booth and specials at the Little Mill
1-4pm – Live music on the Main Lodge Sundeck
6:30pm – Eastside K9 Fundraiser: Days of My Youth movie viewing at Canyon Lodge

Measuring at 50 feet wide by 50 feet long, the Monster Energy Air Bag covers the entire surface area of a jump allowing users to attempt new tricks, with an airbag landing, before taking it on a snow landing.

The Monster Energy Air Bag is open to adult and youth skiers and snowboarders of intermediate-advanced ability. A lift ticket is required to participate.

Coaches with Mammoth’s Snowboard and Freeride Teams will be offering traning camps to help hone in on your jumping.  Camp Sessions are open to the public.  Enrollment includes one hour private jump session, individualized instruction, daily video review and unlimited use of the Monster Energy Air Bag.

Team Training is also available.  For more information on the please contact Ben Wisner at bwisner@mammoth-mtn.com or 760.934.2571 ext. 3144.