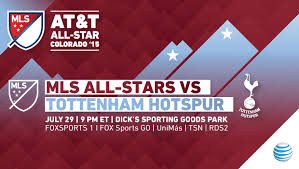 You can bet coach Bruce Arena didn’t want to see his fragile veterans play an unnecessary game, Commish picks or no.

We are honored and thankful to be add to the MLS All-Star roster! Just arrived in Colorado! https://t.co/iGtGYkSJtU

Got a question for @yedlinny? Reply to this tweet and we'll pick the best for him to answer later… #MLSAllStar pic.twitter.com/4J1TtffsQW