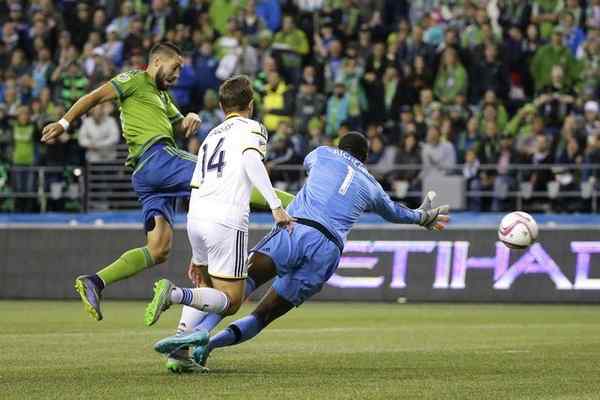 Here’s the Galaxy player quote sheet for the Galaxy’s loss to the Sounders. Click here for video and transcript of head coach Bruce Arena.

If he would agree on “gift-wrapping” the game like Bruce Arena said: Yeah, with the goals that ewe conceded, I think those goals were uncharacteristic. They don’t usually happen. I think it was three goals and a bit of miscommunication. It was just a poor time for that to happen.

If the crowd noise was an issue, if he could hear his teammates: Yeah, that’s why I ducked on that ball because I heard Donovan. We could hear each other fine. The crowd wasn’t different than it usually is. It was just, again, like I said, uncharacteristic of our team. I thought we fought hard to get back into the game, make it 2-2, but Seattle changed their lineup in the second half. They pushed Dempsey out to the left. They put Valdez up top with Obafemi and they were able to get down our right side a lot and put a lot of pressure on us in the second half. We didn’t have much.

How frustrating the loss was: Definitely frustrating. This is the earliest I’ve ever been out of the playoffs. Vacation time, this is the earliest for me. In seven years, to be out this early, it’s disappointing, it feels different. We wanted more. But we put ourselves in this situation. We didn’t finish out the year the way we wanted to. A lot of ups and downs. We weren’t consistent enough, but when you fall flat like this, it’s a good time to reassess to take the time you need and come back even stronger next year. We have to pick ourselves back up, enjoy time with family and be ready to work when we come back.

Reasons for inconsistencies: I don’t know, it’s something I’ll have to think about. It’s too soon to start talking about that.

On adjusting to midseason acquisitions: Obviously when you add new people, things are going to change. But we’ve added new people midseason in years past and we’ve done really well with that. You can’t really put the blame on that. I don’t really know what to put the blame on. We didn’t have it all this year. And that’s why we’re out.

How disappointing the loss was: It’s very disappointing. This is my opinion though. I hate losing against Seattle. We went down. We conceded two goals within the first 15 minutes of the game, we worked extremely hard, got ourselves back into the game and they got another goal. It’s extremely disappointing on our end. You have to give credit where credit is due and tonight: They scored more goals than us.

What happened at the end of the year: This year, it was the same story. It was tough getting that road win. We tried to overcome it throughout the year but you notice once we play away, we didn’t get the results we wanted. Now we prepare for next year, next season.

On coming back in the game: When those goals went in, we had faith that we were going to get a goal back. We’re a better team than Seattle. That’s my personal opinion. I felt like we had numerous opportunities, a couple of offside calls that I would counter with the sideline ref. But I felt like if we buried our chances, we would have come out on top.

On coming back for next year: Personally, I feel like we have a phenomenal team. We have a great attacking threat and we have great defenders. The coaching staff, they’re going to get it right this offseason and we’re going to come back strong.

Thoughts on the game: You should certainly never point fingers but as a group of players, we have to take responsibility for ourselves. When you concede three goals away from home and you have to score two it’s always difficult certainly, to win the game. Obviously everyone is disappointed. We knew we could come here and certainly win the game. If you look at the first-half performance: Certainly we gave them a goal to start, then got ourselves back into the game. I thought dominated the game. Then gift them another goal then we got another goal back and then in control again. I thought that was one of the best first halves we played. It means nothing if you don’t win the game. It’s disappointing. When you’re the champions and you know what it feels like to lift that trophy and now for it to be taken away from you, it’s difficult to take. We can sit here all day, stand here all day, but we weren’t good enough tonight. The effort was there, there’s no question about it. Move forward quickly, we’re out, have to wait for next season.

On going into the second half: I thought we played very, very well in the first half. So our confidence was fairly high to come back and you concede and you come back again. You come into halftime thinking we certainly have a chance to win this game. We knew that before the game but I don’t really know what happened in the last goal. I haven’t really seen it. But it was a good strike by the lad. Listen, we’re out, all we have to do is take it, take responsibility and wish Seattle the best of luck going forward.

Changes for the offseason: It’s not up to me, it’s up the manager, talk to Bruce about that.

Thoughts on the game: I don’t think our battling quality is ever in question, or our character. We always give everything we’ve got. Sometimes it’s not enough, but I think if we analyze the whole season, we were brilliant up until three or four weeks ago. All of the sudden, we’ve been conceding sloppy goals and that certainly got carried into tonight. That’s the disappointing part of the season looking at the season as a whole, conceding too many over the past three, four weeks. You can never question all the lads’ commitment, effort and desire because I see it on a daily basis.

How disappointing the game is: If you don’t win trophies at the end of the season, it’s always disappointing. But you have to dust yourself down and get ready to go again. Before you know it, the season will be starting again. Credit to Seattle, they won the game tonight in a one-off game. For us, it just seemed like we have to score three, four goals to get over the line and win games and that’s what we have to analyze over the winter.

On what happened on the second goal: I think we both hesitated. I’ve been waiting for him to come and take it. He’s been probably waiting for me to clear it. That’s where the confusions come. I felt like he was offside when the ball was delivered. I’ll have to have a look at it, I’m not too sure, but I think we’ll both take responsibility for that. I think in general play, we have been conceding too many balls off set pieces and crosses into the box. It feels like we have to score three or four goals to win games at the moment and that’s not how it can be. We’ve got to improve on that.

On the third goal: We have chances to clear the ball. I’m not sure of the actual details of the goal. From being further up the field, it felt like we had two or three opportunities to clear it out of the game or into their half. A couple of sloppy clearances and we were punished for it.

How this impacts going into next season: I think it makes you determined. It could be my last season of football, I don’t know. I certainly don’t want to feel how I’m feeling now this time next year. I would certainly like to go out on a high. But it’s a long season. I only came here for the last maybe, three, three-and-a-half, four months. I’ll certainly be better for the experience next year. Knowing this club and looking at it from the outside, I know we’ll try to improve in certain areas, improve the squad and we’ll hopefully have a squad that’s ready to compete next year.

Challenges he faced in MLS this year: Going certainly on the road, certainly, playing on turf. Playing in altitude, playing in humidity, they’re the hurdles that I’ve had to face over the last few months that I wasn’t aware of. Every away game has got a different challenge. I think at home, we’ve got no problems because we’re very strong and we win more than we lose, but I think for us moving forward next year, if we want to compete and finish in the top two places to avoid games like tonight, we’ve got to be better and stop conceding off set pieces and crosses.

Conceding on set pieces and crosses at home or away: Both, just in general. I know Bruce quite well now, having gotten used to him, and I’m sure that’s where he’ll be analyzing over the winter. Stop this team conceding goals because we know we’re capable of scoring anywhere in the league. But the problem over the past three, four weeks, you look at it, even the Dallas game, we won 3-2, we had to score three goals to beat Dallas at home. We conceded five against the timbers. We conceded two tonight, two at Kansas. I’ve been in this game long enough to know that if you’re going to be successful, you can’t keep conceding goals. It’s too difficult to win football matches if you’re conceding two or three every game.