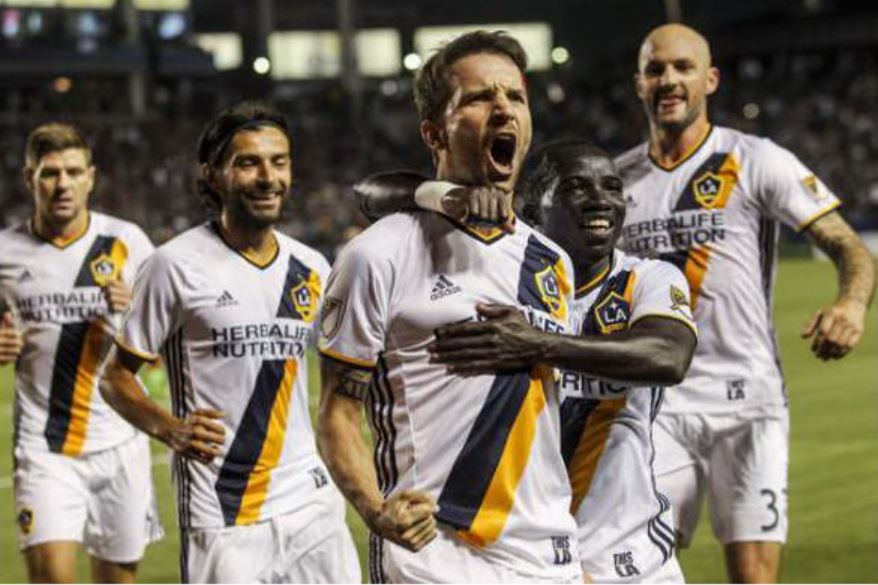 The Galaxy came back from another early goal to put up a five-spot on previously undefeated Real Salt Lake on Saturday, winning 5-2. L.A. extended its unbeaten streak to five games, and has scored nine combined goals in the past two games.

Midfielder Emmanuel Boateng was one of the many standouts on Saturday, scoring once and adding two assists. He was making his second MLS start and not only showed his speed, which is unmatched on this team, but some good quality. He sent in a sensational cross on Mike Magee‘s goal in the 26th minute and also assisted Giovani dos Santos‘ brilliant chip shot in the 45th minute.

“He’s got energy, he’s got pace, and he’s got quality in the wide areas as you see from his assist,” midfielder Steven Gerrard said. “And he got off the mark today with a cheeky little finish. Certainly up for man of the match, the little fella’.”

On dos Santos’ goal, Boateng dusted his defender down the left side, came into the box and got pulled down. While still on ground, he poked the ball toward dos Santos, who masterfully chipped it over RSL goalkeeper Nick Rimando. Dos Santos compared his goal to his Gold Cup chip shot over Tim Howard in 2011.

“The truth is it was pure joy,” dos Santos said in Spanish of his reaction to his goal. “I think it was a beautiful goal. And as a forward you want to be in the score sheet and contribute to the team’s success as I’ve said before.”

Boateng scored his first MLS goal Saturday, tapping home a goal in the 41st minute. Dos Santos sent a ball into the box, which Gyasi Zardes redirected toward Boateng.

Boateng was added to the starting lineup after a groin injury to Sebastian Lletget on Friday. His addition to the lineup caught RSL offguard.

“We had been preparing all week for Lletget up there as well, but Boateng throws a different look to their play,” RSL head coach Jeff Cassar said. “He was a difference in the way they played. L.A. was good tonight. Very good. They were firing on all cylinders.”

The Galaxy got goals from five different scorers for the first time since a 5-0 rout over Portland at home on June 24, 2015. Zardes opened the scoring in the 19th minute, erasing an early deficit after a goal in the 16th minute from Juan Manuel Martinez. Gerrard closed the scoring for L.A. in second-half stoppage time.

Great to be back! What a great performance by everyone. Thanks to everyone who came out tonight! #LAGalaxy

Love to win.
Hate to give up a goal.
On to the next. #ThisIsLA