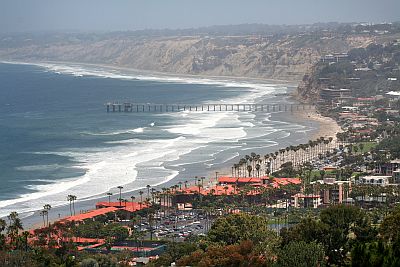 By Stan Wawer
Staff Writer
La Costa Resort and Spa isn’t La Costa anymore. Oh, it’s still named La Costa, but you ought to see the old girl now.
It’s amazing what new management and a $140-million face-lift can do for you. A tweak here, a tweak there and suddenly you emerge as a destination for all seasons.
La Costa has transformed itself into an all-inclusive getaway with a Camp Family persona.
“Families are 60 percent of our summer business,” said Cindy Lawrence, the resort’s public relations director. “We have so many family activities, and we are just minutes away from Legoland, Sea World and other San Diego activities.”
La Costa Resort opened in 1965. It was ahead of its time as the first full-service spa in the United States.
Moe Dalitz — one-time bootlegger, racketeer and owner of Las Vegas’ built the resort along with Irwin Molasky and Mervyn Adelson, later the founders of Lorimar productions.
Founded in 1992, KSL Resorts took over ownership of the faltering resort in 2003. It has transformed it into a destination for families, as well as romantics and golfers.
What’s new?
Splash Landing pools and waterslides
Garden pool and Garden Pool Cafe for a more adult pool experience
The $1 million Kidtopia, a club for infants and kids up to age 12
Vibz Teenspace, a game lounge with Xbox 360 game center and more
Legends Bistro renovation and seasonal menus
High-definition plasma TVs in all guest rooms
Renovated Plaza guest rooms and corridors
New studio villas and one-, two- and three-bedroom villas
$1.5 million golf practice facility
“We have a teen reception in Vibz between 5 and 6 p.m. every Friday night during the summer,” Lawrence said. “It’s for teens ages 13 to 17. It gives them a chance to get acquainted while their parents check in.”
“La Costa also boasts the largest ballroom in San Diego County. We did an event in the ballroom for 1,500 guests,” Lawrence said. “We also did an Indian wedding with the groom riding an elephant while white flowers were thrown in front for good luck. The ceremony lasted four hours.”
The resort’s village-like atmosphere offers a different experience from traditional hotels. Its 400 acres includes 40 acres of rooms and grounds, all connected by fountains and lush landscaped walkways.
Summer rates begin at $319, double occupancy. If you make your reservation now, you get a 30 percent off a three-night stay (800-438-9216 or www.lacosta.com).
Recreation is at the heart of the resort. The Spa at La Costa offers everything from a coastal stone massage to a 50-minute custom facial. The spa has 28,000 square feet of indoor space and a 15,000-square-foot outdoor courtyard.
La Costa also offers 36 holes of championship golf. Tiger Woods made a legendary shot that clinched the 1997 Mercedes Championship on La Costa’s North Course.
There are seven pools. Splash Landing features three pools and a trio of waterslides. The family pool offers its own sandy beach. It is connected by a tot-friendly slide to an interactive splash pad outfitted with geysers, squirting cannons and a cascading water tree.
La Costa’s 17 tennis courts include seven lighted courts. The resort’s stadium court hosted the Women’s Professional Tennis Tour’s Acura Classic, as well as the Davis Cup men’s competition.
An 8,000-square-foot athletic club offers more than 50 classes a week.
La Costa also has six dining venues. Legends Bistro features a wine bar and wine room, along with a private dining room and patio dining. BlueFire Grill features sophisticated dining and coastal cuisine. The lobby lounge has cocktails and light fare including onion rings that are to die for.
Kidtopia is open seven days a week from 9 a.m. to 4 p.m. with Night Camp sessions offered on Fridays and Saturdays from 6 to 10 p.m, Kidtopia offeres interactive, supervised programs, including a reading program.
Vibz, the teen lounge, is open seven days a week from 10 a.m. to 9 p.m.
“We have a teen reception in Vibz between 5 and 6 p.m. every Friday night during the summer,” Lawrence said. “It’s for teens ages 13 to 17. It gives them a chance to get acquainted while their parents check into the resort.”
If you care to venture outside the confines of the resort, you can take the family on a short ride to Legoland (also in Carlsbad), the San Diego Zoo or Wild Animal Park and SeaWorld Adventure Park. Adults might like a sidetrip to Temecula wineries.
KSL also has two other resorts in the area: the famous Hotel del Coronado and Rancho Las Palmas Resort and Spa in Rancho Mirage. The latter resort has two 100-foot-long waterslides and a 425-foot lazy river in which you can bob along on a floating tube.
La Costa Resort and Spa is an idyllic summer family playground, but it also is a place for all seasons.