Luxury line Celebrity Cruises is combining a little-known Southern California deal with its popular “Pick Your Perk” feature to offer Caribbean-bound passengers savings of up to $1,425 per double-occupancy stateroom on its new “Solstice” fleet, with departures from Nov. 15 to April 12, 2015.

Prices start at $799 per person for a seven-night cruise.

Book by Aug. 31 with your travel agent or through Celebrity Cruises.

Wine-themed cruises are as popular as ever and Celebrity Cruises, for which 10 of its restaurants received Wine Spectator’s “Award of Excellence”, features a series of itineraries highlighting California and South Pacific wineries  through January 2015.

Scott Clifton, director of sales, states, “Celebrity’s renown for its culinary arts offerings keeps growing. From our Adam Tihany-designed two-story wine tower (holding one of the most extensive wine collections at sea) our 10 award-winning restaurants, menus crafted by James Beard award-winning chef and a team of certified sommeliers, food and wine aficionados always have a never-ending selection to complement the specialty wine-centric itineraries of our themed cruises.”

With Costco Travel, the May 14, 2014 11-night Eastern Mediterranean cruise aboard the line’s newest ship Celebrity Reflection will feature Clos Pegase winery from Napa Valley and host winemaker Richard Sowalsky. The itinerary includes ports of call in Santorini, Mykonos and Athens in Greece and Istanbul and Ephesus in Turkey. Sowalsky will host a wine tasting reception; tastings of single vineyard designation and artisanal cabernet sauvignons; a wine pairing luncheon; and, tours of the ship’s wine collection and culinary operations.

On November 1, 2014, travelers will sail aboard Celebrity Reflection for a seven-night Eastern Caribbean cruise for the 2014 California Wine Festival at Sea, a first for the 10 year-old land-based California Wine Festivaland brought together by Worldview Travel. The cruise will depart from Miami and visit various Caribbean ports of call, including San Juan, Puerto Rico; Philipsburg, St. Maarten; and, St. Thomas, USVI. California wineries including Heitz Cellar, Melville, White Oak and Bernardus will provide wines at a tasting reception, two private wine tasting seminars, a private four-course wine-pairing luncheon, a sommelier-guided tour of the ship’s two-story glass wine tower and a private behind-the-scenes tour of Celebrity’s culinary operation.

For reservations or information on the Clos Pegase and Grgich Hills cruises: call 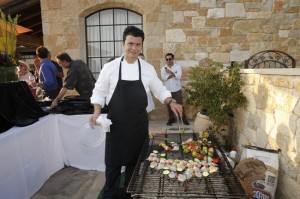 The Celebrity Cruises Great Wine Festival takes place from 2 to 5 pm on May 31 at the Great Park in Irvine. The event will feature more than 40 premium wineries, craft breweries, spirits companies, and award-winning restaurants.

Proceeds from the festival will benefit LegalAid of Orange County, a non-profit organization that provides free and low-cost legal services to individuals of Southern California.

Tickets are $100 per person. Discounted tickets are also available for government and non-profit workers, as well as sitting judges. Tickets and can be purchased online at Celebrity Cruises Great Wine Festival

“Celebrity’s love affair with the culinary arts continues to flourish. We saw this opportunity to introduce food and wine aficionados to culinary experiences they can enjoy while on a Celebrity ship, as well as restaurants and beverages they have yet to try.” said Scott Clifton, director of sales.