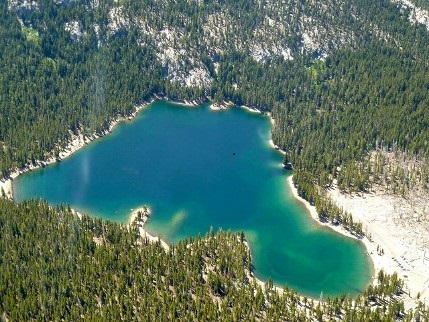 Aerial view of a lake in Mammoth. (Photo courtesy of Skytime Air Tour)

If you want to get a fresh perspective of Mammoth, try the new helicopter tour. I’m using to seeing the Sierras from ground level or even 11,000 feet on top of Mammoth Mountain.

But a flight with SkyTime Air Tours out of the Mammoth Airport gave me a whole other view of the beautiful Sierra mountains. I began to appreciate the ruggedness of this vast mountain range.

We were excited to get an aerial view of Mammoth Lakes. And veteran pilot Steve Roski proved an able aviator as well as an interesting tour guide.

“I grew up in Hawaii and flew helicopter tours in the islands for many years,” the amicable aviator explained. “But I got bored and decided to try some place new. That’s when I got the job with SkyTime Tours. Now I see something different every day and live in another beautiful place.”

After signing the required four pages of legal waivers, Roski led us out onto the airport tarmac, where he described the Robinson R66 helicopter we would be flying in. 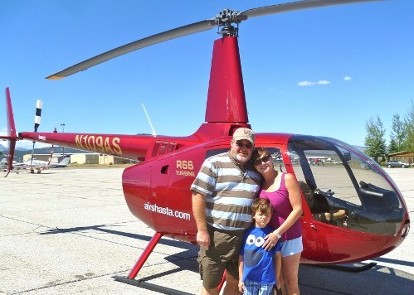 “This helicopter is one of the few that can fly at this elevation. It’s powerful Rolls Royce turbine is especially built for this aircraft and can deliver up to 1,000 horsepower, while the helicopter only weighs 1,000 pounds,” the pilot said. “It is also specially built for tours with large windows for all the passengers.”

Strapping in, we voted to give Los Angeles photographer Ellen Clarke the front seat. She thought she could get the best photos sitting in the glass nose.

My friend Emele from Hawaii joined me in the two back seats. Snapping on our seatbelts, we donned heavy Boss headphones that would cancel out the roar of the mighty turbine right behind us.

We could also talk to the pilot and listen to his fascinating commentary about the Alpine environment. This must be how Eagles feel as they soar through the mountains.

Passing over the thermal power plant, we were soon slipping through the canyons. Glittering lakes dotted the landscape below.

Off in the distance, we saw Mono Lake. It is one of the oldest lakes in North America, forming more than 760,000 years ago.

“Every lake is a different color, depending on the minerals that have seeped into the water,” Roski noted. “Most are different shades of aquamarine, but there’s one lake we call Purple Lake because of its bright purple color.”

Looking down, we found June Lake below, with it’s ski runs cutting through the Pondera pines. This basin had been carved out by glaciers, and was the home of Paiute Indians.  down.

Horsetail Falls spilled over a impressive cliff. It sits just below the 11,000 Carson Peak.

Soon we were climbing toward Minaret Summit. It’s craggy peaks formed a jagged skyline which you’ve actually seen many times before.

“They used the Minaret as the background in flying monkey scene in the ‘Wizard of Oz,” Roski said.

Flying on, we approached a gigantic volcanic dome that I didn’t recognize. But soon, I realized it was the backside of Mammoth Mountain, a place I have skied dozens of times. 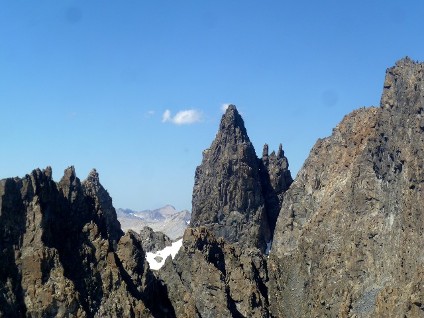 Without its thick mantel of snow, the 11,000 foot peak looked foreign to me. As we circled the gondola station on top, tiny mountain bikers shot off the summit. We watched as they zigzagged down the mountain.

The massive dome was formed in a series of eruptions 57,000 years ago. Even today, it still spews volcanic gases.The ski resort at the base looked like a toy train village.

“One year, a geologist warned that the volcano was going to errupt again and tourists were too afraid to come,” Roski said. “But as you can see, we’re still here.”

Moving on, we ran into Mineral Hill, the place where Mammoth’s gold rush had begun. Thousands rushed to seek their fortunes in the Eastern Sierras.

“They still mine gold there, but they keep it pretty hush hush,” Roski added.

Next up was Convict Lake, so named when a band of convicts robbed local banks and hid out here. You’ve seen the lake in movies such as “How The West Was Won” and “Star Trek: Insurrection.”

Dropping back into the valley, we slowly lost elevation.

“This helicopter loves to climb. It’s hard to get it to fly lower,” Roski said as the airport rolled into view.

Slowly, we sank back onto the tarmac. Ending our thrilling aerial adventure.

“It was great, the mountains were huge,” Emele said. “I’d highly recommend this tour to anyone.”

Clarke was also thrilled by the helicopter ride. The professional photographer couldn’t wait to download the photos she had taken.

The tours are customized for each customer and range from 15 to 90 minutes long. Prices begin at $88 per person in the four-man helicopter for 15 minutes. A 45-minute flight costs $225 per person for four.