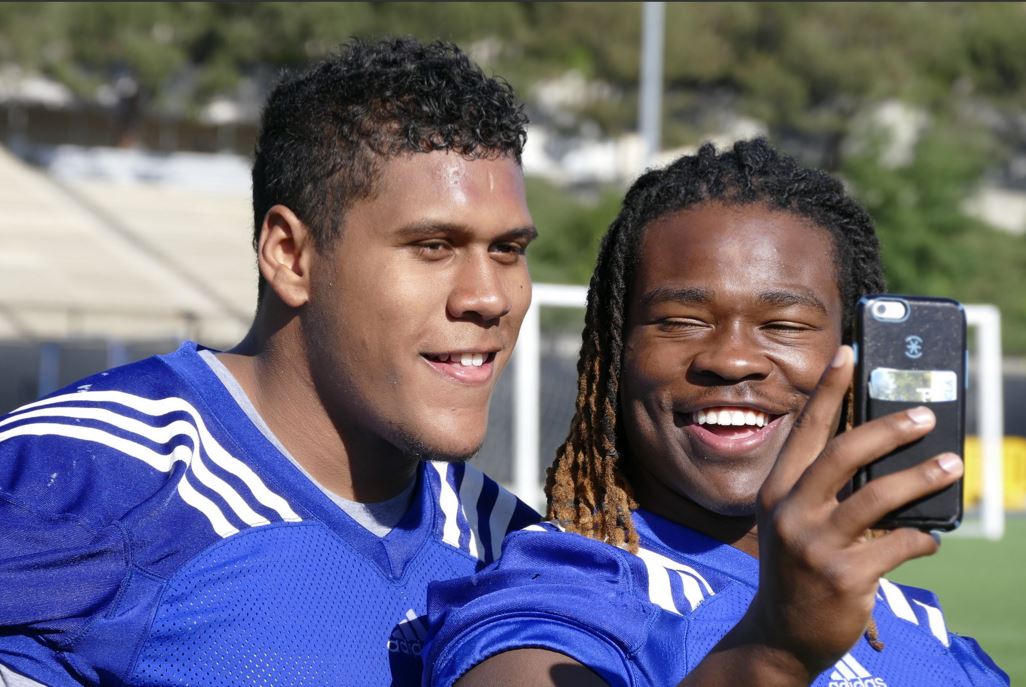 Defensive lineman Eli Ankou, left, and linebacker Jayon Brown work on their selfie game after practice on Tuesday. The two are two leaders on the UCLA defense this season. Photo by Brad Graverson/The Daily Breeze/SCNG

Tom Bradley returns for his second year as UCLA defensive coordinator and a main concern for him and head coach Jim Mora will be solidifying the rushing defense.

The defense lined up mostly in a 4-3 formation during Tuesday’s practice and the shift could go a long way toward solving UCLA’s inconsistent performances against the run last year. However, Mora, linebacker Jayon Brown and defensive tackle Eli Ankou maintained that the changes are minor. Ankou called it “window dressing.”

“You go point A to point B,” he said. “You just play the game. I wouldn’t say it’s much different.”

The commitment to stopping the run is so real that it’s already generated a hashtag from freshman Lokeni Toailoa:

Staying healthy will be vital for UCLA this year as injuries unraveled a promising defensive unit last season. It started early with defensive tackle Eddie Vanderdoes tearing his ACL in the season opener and it continued with Myles Jack and Fabian Moreau. Then it dragged on throughout the year.

A look at some key defensive injuries and the team’s game-by-game performance against the run: 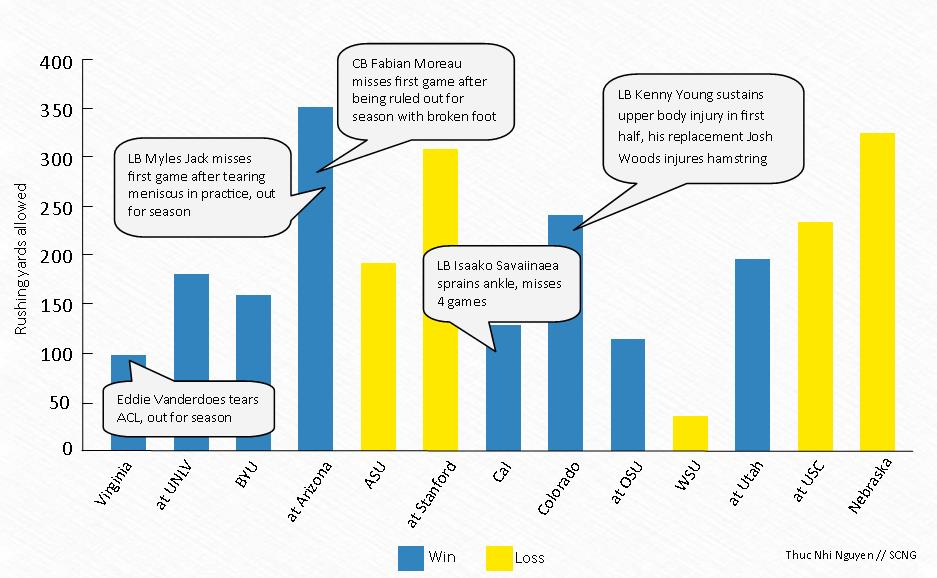 UCLA allowed three teams to run for 300 or more yards last year, which was second most in the Pac-12, better only than Oregon State, which finished winless in the conference.

As is often the case with injury-riddled seasons, some positives can come from tossing inexperienced players into the fire. Before last year, Brown was primarily a special teams player who had eight total tackles to his credit. This spring, he’s a leader on the defense after starting nine games and leading the Bruins in tackles.

“Coming back as one of the captains on the defense, everyone is looking up to me and Eli and the rest of the returning starters,” Brown said. “We have to keep the young guys responsible and accountable and on point.”

This is the first time in his UCLA career that Brown has had the same defensive coordinator for two consecutive years. The Bruins had Lou Spanos during Brown’s freshman season and Jeff Ulbrich during his sophomore year before bringing in Bradley last year. The linebacker from Long Beach said it’s a welcome piece of consistency that could prove well for the team.

“He knows us better and we know him better and he knows what to expect from us and who can do what and what type of situations to put us in,” Brown said. “We have more of a trust for each other and it should benefit us this season.”