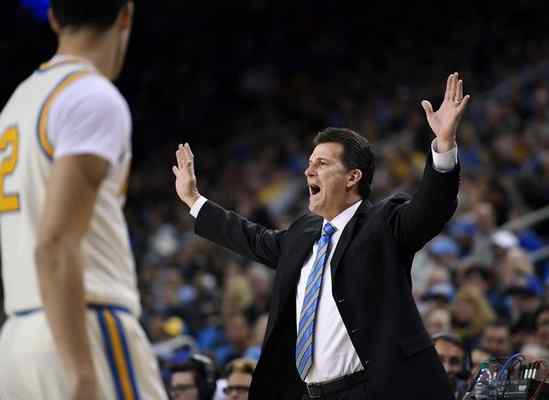 Steve Alford bounced back from a losing season in a big way, but fell short of realizing his 2016-17 team’s potential. (Mark J. Terrill/The Associated Press)

Strengths: It’s not as gratifying as wizardry with Xs and Os, but there is no shame in a college basketball coach’s greatest strength being recruiting. Steve Alford landed three five-star prospects in 2016, but that doesn’t begin to do justice to their talent. All three UCLA freshman last season are expected to be first-round draft picks in June and Lonzo Ball could be the No. 1 overall selection. No matter how good the coach, he can’t succeed without good players. Alford is clearly gaining momentum on the recruiting front, following his best class at UCLA with a 2017 haul ranked No. 2 in the country.

Weaknesses: Alford was consistently slow to make in-game adjustments this season, showing reluctance to take risks when things were going in the wrong direction. USC flummoxed Alford with a simple zone defense in the Bruins’ ugliest loss of the season Jan. 25 at Galen Center. As UCLA’s defense reached its lowest point of the season, a 96-85 loss at home to Arizona, Alford stuck with an offensively oriented lineup while Aaron Holiday and Ike Anigbogu played just 23 and 12 minutes, respectively.

Best moment: Deep into the season when UCLA’s weaknesses had been thoroughly exposed, Alford led his team to a win in the most improbable of circumstances. Avenging an earlier loss to Arizona by snapping the eventual Pac-12 champions’ 21-game winning streak at McKale Center with a 77-72 victory Feb. 25 was Alford’s most impressive feat last season. Arizona appeared to have an overwhelming athletic advantage when it beat UCLA in Pauley Pavilion Jan. 21, but Alford found a way to hold the Wildcats 19 points below their 96-point total a month earlier when they met in Tucson. UCLA slowed the pace, a diversion from their style, and managed to win despite an uncharacteristically poor offensive showing.

Worst moment: Lonzo Ball accepted the blame after then-No. 8 UCLA was shocked by USC in an 84-76 loss Jan. 25, but his season-high seven turnovers were primarily the result of having to force the ball into action. UCLA scored the first eight points of the game. Then USC shifted into a zone defense Alford couldn’t figure out over the next two hours. UCLA’s much-maligned defense wasn’t the problem. Its celebrated offense couldn’t generate any kind of attack despite an arsenal of 3-point shooters, which appeared to be the perfect answer to a zone defense. This loss fell primarily on the shoulders of Alford, who couldn’t put his players in a position for success..

Summary: Alford began the season on the hot seat after a 15-17 record the previous season. By the time UCLA’s 31-5 season was complete, the university was trying to convince him not to leave. Alford blended freshmen with veterans to create the most offensively efficient team in the country. But given the amount of talent and experience, it’s certainly disappointing to come away with a third-place finish in the Pac-12 and simply another Sweet 16 appearance in the NCAA tournament. Alford earned his job security back, but his best team at UCLA fell short of its potential. Given its progress on defense over the final third of the season, this team was capable of winning a national championship, but it wasn’t even one of the final eight teams left in the tournament.

Future outlook: Despite the departure of at least five of UCLA’s eight rotation players last season, the future looks promising for Alford. He is only gaining steam on the recruiting front and he can now shed the burden of coaching his son, something that created problems beyond perception. Alford is four seasons into his tenure at one of college basketball’s most legendary programs and has achieved enough success to reportedly earn a job offer from another fabled program, Indiana. Alford has displayed his limitations as a coach, but he has the program headed in a positive direction.