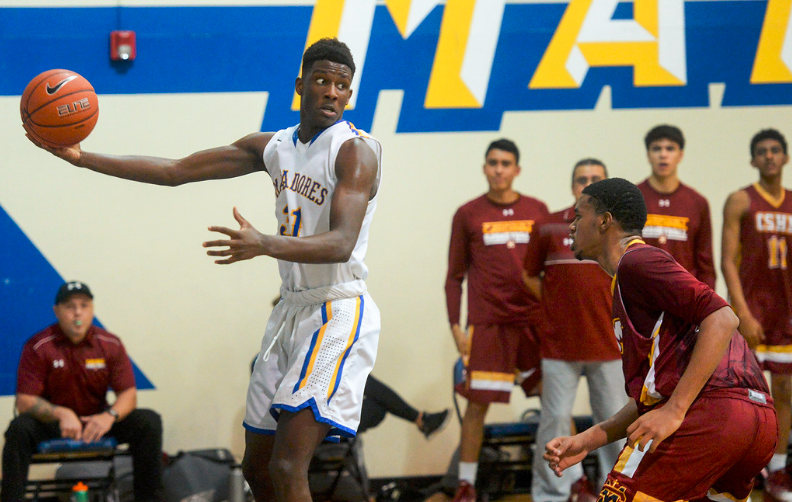 By Stephen Ramirez
There’s usually a sense of unfamiliarity for most high school playoff games.
That won’t be a problem for the La Mirada and Cantwell-Sacred Heart of Mary boys basketball teams this week.
The two area powers were matched together in Division IAA when the CIF Southern Section released its playoff pairings Sunday.
The La Mirada-CSHM matchup, a rematch from earlier this season, highlights the area selections, which includes Sonora getting the No. 4 seed in Division IAA; La Serna earning No. 4 in 3AA and St. Paul the No. 2 in 3A.
First-round games are scheduled for Wednesday, with the quarterfinals and semifinals scheduled for Feb. 21 and 24. The finals are slated for March 4.
All games before the final rounds are scheduled for 7 p.m. starts.
The La Mirada-CSHM opener, slated for Wednesday at La Mirada, is a rematch of a Jan. 4 meeting won by the host Matadores, 66-55. La Mirada, two seasons removed from winning a CIF State Division II title, was led by freshman Shemar Morrow, who had 20 points and seven rebounds. The Matadores (22-5) rallied from a 26-18 deficit at halftime by outscoring the Cardinals (12-14), 48-29, in the second half.
La Mirada, after losing back-to-back games to Mayfair and Cerritos in Suburban League play, closed the regular season with six consecutive wins. The Matadores finished second in the Suburban League.
CSHM, which played in the Open Division the past two seasons, won three out of its last five to finish third in the Del Rey League and earn a spot in the playoffs.
Sonora (23-5), which won Division 3AA two seasons ago, won its last eight games to earn the No. 4 seed in 1AA. The Raiders drew a first-round bye and will host either Calabasas or Santa Ana Foothill on Friday.
Sonora went 9-1 in winning the Freeway League title, with the only loss coming to rival La Habra.
St. Paul (21-5) is having one of its best two-season stretch in its history. The Swordsmen, led by senior center Louis Bangai, won consecutive Santa Fe League titles, winning first back-to-back league championships for the first time. They also drew a first-round bye and will host either St. Bonaventure or Eastside on Friday.
La Serna (24-2) is having its best season in nearly a decade. The Lancers won their first Del Rio League title in the post Mike Lowe era, and come into the postseason having won 17 of their last 18, including going 10-0 in league play.
La Serna will host Righetti in Wednesday’s first round.
Other 3AA area matchups are Whittier Christian (17-10) at Royal; San Juan Hills at Santa Fe (18-9); Pioneer (19-8) at Laguna Beach and Buena at Schurr (20-7).
Schurr shared the Almont League title.
Whittier (15-11), which was fourth in the Del Rio League, received an at-large bid in 2AA and will travel to Crescenta Valley for the first round.