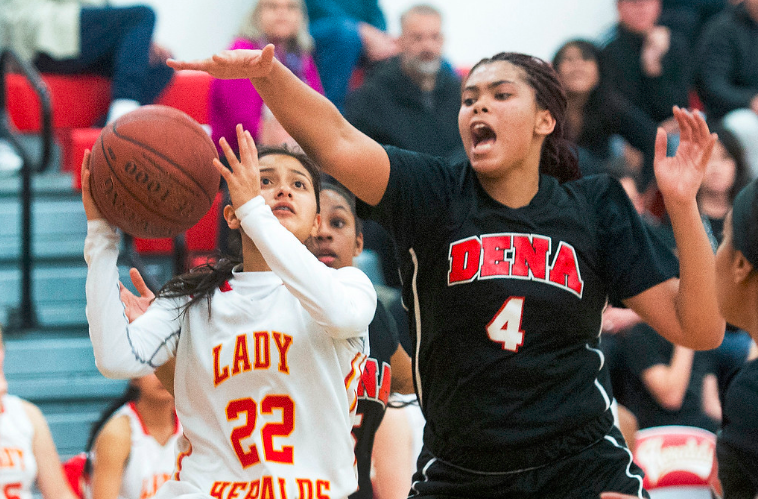 The area girls basketball season likely came to an end Wednesday as the area’s final four — Sonora, El Rancho, California, and Whittier Christian all lost in the semifinals. All in theory could apply for at-large bids to the state tournament, but it’s not likely they’ll we’ll be picked.
Here’s Wednesday’s wrap up:
DIVISION 4AA
PASADENA 54, WHITTIER CHRISTIAN 48
LA HABRA — It’s been a special season for the Pasadena High School girls basketball team, and it keeps getting better.Taurie Magee scored 18 points and had 17 rebounds and the Bulldogs rallied in the fourth quarter to advance to the CIF Southern Section semifinals with a 54-48 victory over host Whittier Christian in a Division 4AA quarterfinal on Wednesday.
Kamesha Moore also had 14 points for Pasadena (22-9), which will host top-seeded Village Christian, a 46-35 winner over Nipomo, in Saturday’s semifinals.
Christa Evans had 18 points and Clairessa Watkins 14 for the Heralds (20-10).
Pasadena looked in trouble after trailing 37-34 after three quarters. But Magee and Gillian Smith (seven points) led a fourth-quarter resurgence, keying an 11-6 surge to begin the period and give the Bulldogs a 45-43 lead. Magee tied it at 41 on a putback with 5:06 left before Smith converted a turnover into a fast-break layup for the two-point lead with 3:40 remaining.

Evans tied the score at 45 with an inside shot before Nia Cathcart made consecutive layups for some breathing room at 49-45 with 2:35 left.
Evans cut it to 49-47 with 1:50 left, but that was as close as the Heralds got.
Smith hit from seven feet for a 51-47 lead before Moore made two free throws and Cathcart made one to seal it at 54-48 with four seconds left.
Pasadena’s Taurie Magee: “I’m excited. This is the first time we’ve (advanced this far) in about 10 years. I’m excited for myself and my team.”
— Stephen Ramirez
CERRITOS VALLEY CHRISTIAN 50, CALIFORNIA 40
CERRITOS — California High School gave the No. 3-ranked Cerritos Valley Christian High School girls basketball team all it could handle in a CIF Southern Section Division 4AA quarterfinal game Wednesday night.The Condors, who have never been to the CIF-SS semifinals in school history, came oh so close for a team that was much shorter than its opponents.
But in the end, Valley Christian wore down No. 6 seed Cal with three big 3-ponters in the fourth quarter and won going away, 50-40, to advance to its second semifinal since the 2009 season.
With 2:05 left in the game and Cal trailing 42-38, Bushong gave the Crusaders (20-8) a seven-point lead that Cal couldn’t recover.
McKinnie led Valley with a game-high 26 points. Sophomore Calla Anderson had 11.
Cal (19-8) was led by senior forward Paris Rivera with a team-high 16 points.
Cal seniors Farah Waked and Karla Valdez and junior guard Alejah Navarro all had six points each.
“She is probably one of the hardest workers we’ve had as far as putting in extra time,” Barber said of Rivera.
One of the littlest players on the court Wednesday was 5-foot sophomore guard Nicole Robles, who had one 3-ponter and ran the offense for Cal.
“We had a hard-fought season and gave them a good game,” she said. “For the future, the underclassmen are going to be really good.”
Both teams exchanged baskets for much of the first half with the Crusaders holding a one-point advantage in each of the first (21-20) and second quarters (31-30).
In the third quarter each team played even, scoring 10 points each for a 31-30 Valley Christian advantage.
California coach Brian Barber: “We had some defensive lapses at the beginning of the fourth quarter when we let (Cheyenne McKinnie) get open for a couple of (3-pointers) and she hit them both. Then they had another kid (McKenna Bushong) who hit a 3 and that was the back-breaker.”
Cal’s Paris Rivera: “We made it far and tried our hardest. I know this team will see the quarterfinals again. We believe we were ready and it wasn’t about who was better, but who wanted it more.”
“I love this group of kids, they are so much fun. But we did struggle most of the year because we were little.”
— John Sherrard
OTHER SCORES
GIRLS BASKETBALL
Division 1AA
Canyon Country Canyon 49, Sonora 46
1A
Bishop Montgomery 58, El Rancho 41
BOYS SOCCER
Division 2
El Rancho 3, Chino Hills 1
SATURDAY’S QUARTERFINALS
Division 2
El Rancho (20-2-2) at Hueneme (18-2-0)