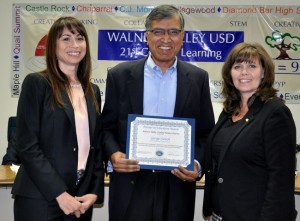 “I’d like to recognize Mr. Ganesh’s contribution to our school. He is a member of our Boosters, he is on the District Steering Coming Committee and an advisor to our Robotics Club” Principal Real said.

This summer, he took on summer registration for the Boosters Club. Mr. Ganesh’s job was to organize and get the Booster parents enthusiastic to work at the booth during four weeks of registration appointments, Real explained.

“And of course, the process went a lot like him: it was organized, it was pleasant and it was productive. I can’t say enough about the contributions that he made because at the end of registration, the Boosters had reached a new level of unity, sign-ups and participation,” Real said.

“When I think about Mr. Ganesh, I also think of his children, Namesha and Niraj. They are a lot like him. They are equally enthusiastic, well-rounded, intelligent, kind, compassionate and humble. I think its true what they say about apple not falling very far from the tree!” Real said.