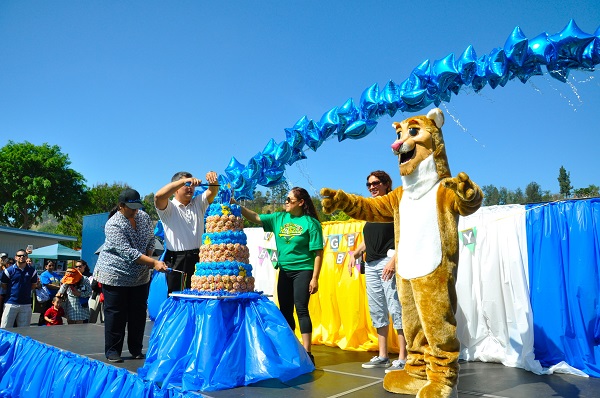 Collegewood Elementary hosted a 50th birthday spectacular on March 20. “Our school was built in 1965!” announced fourth grader Sarah Armstrong on her way to the party held on the upper playground.  The school’s 600 students and staff couldn’t wait for the big day.

Parent volunteers prepared 1,000 cupcakes and 1,200 hotdogs for the party.

“This is a very exciting day for Collegewood, we are ready to celebrate!” 2ndgrade teacher Elvonne Vance exclaimed. Earlier in the week, students and staff posed in a huge “50” for an aerial photo. 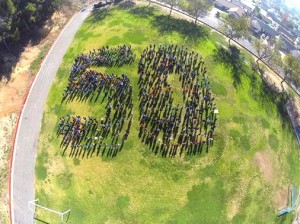 “Collegewood’s an amazing school. We’re excited that parents and community are coming out to celebrate the school’s 50th birthday,” commented Sandy Ibarra, parent of twin 2nd graders. “And it’s my birthday too, so I get to celebrate with Collegewood!”

Parents, alumni, former teachers, community members, and local officials joined the milestone occasion.  “Everyone who has been a part of this school has left a little bit of magic which has shaped who we are today!” Principal Joan Perez stated.

“We want to make sure we leave our mark here at Collegewood. It will be un-earthed in 2065,” Perez said. “They will open up this time capsule and they will see what you left for them!”

“It’s exciting to see so many people today,” said Superintendent Dr. Robert Taylor. “It shows how important Collegewood is to our District and to the whole community of Walnut. So many people are so proud of what’s happened here for the past 50 years!”

Three of the school’s former principals Jack LeBrun, Dr. Susan Brown, and Robert Chang were on hand for the celebration.

“Collegewood has always had a great hard-working group of teachers and staff who really dedicate themselves to the students,” said LeBrun, the school leader from 1985-1992.

“It was wonderful! We were excited to be in a brand new school,” shared Carol (Paine) Crouch, who was in the 3rd grade when the school opened.

“I lived on Collegewood Drive, so when the school was being built the neighborhood children weren’t happy they would lose their playground. We did lots of climbing in these hills!” Crouch added.

“I came here in kindergarten,” said Cheryl Fausel.  “We all brought flower seeds to throw on the hillsides!”

First grade teacher Jane (Dyer) Smith is the school’s most familiar alumnus.  She’s taught at Collegewood for the past 28 years.

“I was in the third grade with a very special teacher named Janey Browning. I can still remember the day that we moved into our brand new school. The classrooms seemed so big to us!” she said.

Students began the school year at the former location of Walnut Elementary, now Ron Hockwalt Academies, and then moved to Collegewood when it was completed.

“I remember walking on the hiking trails above the playground and we would have lunch under the trees. And since we were the first students we got to vote for the school colors and mascot!” Smith told students.

“Their special influence led me on the way to becoming a teacher.”

“I had lots of fun and remember we did square-dancing and special field trips,” recalled City of Walnut Mayor and alum Nancy Tragarz during a tree dedication at the party.

Ray and Nancy Fausel’s five children attended the new school and they wouldn’t have missed the big party.

He was one of the District’s original Board Members from 1964-1969, serving both the Walnut Elementary District and Walnut Valley Unified School District.

After the ceremony, families enjoyed a picnic lunch and birthday cake.