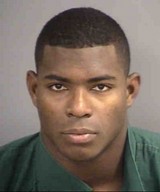 Yasiel Puig‘s written arrest report was released Monday morning by the Florida Highway Patrol. The arresting officer, Gualberto Morales, scathes the Dodgers’ outfielder for endangering lives on Interstate 75 in Collier County, where he was clocked driving 110 mph in a 70-mph zone (spelling and grammar errors haven’t been altered):

There were three passengers in the vehicle: Mr. Puig’s mother, friend and his cousin. By driving the vehicle in this manner Mr. Puig showed willful and a total disregard for the safety of his mother and the other two passengers and any vehicles on the roadway and placed the life’s of everyone in his vehicle and every vehicle that he was passing on the roadway in danger.

Based on my training and experience as a Florida Highway Patrol Trooper and due to the high speed that he was traveling and the others Vehicles on the roadway. If Mr. Puig would had loss control of his vehicle or would had suffered a tire failure and crash. His mother and the two passengers would not survived as resulted of his action.

That’s the only new bit of information contained in the report. That, and Puig’s weight is listed at 230 pounds. He’s listed at 245 on the Dodgers’ web site.