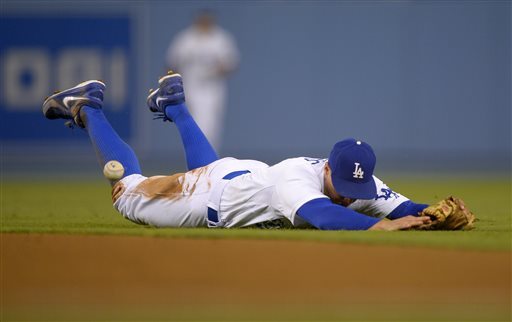 The Dodgers are still looking for a veteran infielder who can play second base with 13 days to go until pitchers and catchers report to spring training. Michael Young said his preferred destination is Los Angeles — if he doesn’t retire — and Young seems to be the Dodgers’ top choice for the job as well. Here’s my story from last night.

If Young chooses to retire, the Dodgers have a pair of veteran options in Chone Figgins and Brendan Harris who will attend spring training as non-roster invitees. Of course, the Dodgers wouldn’t be in this position if Nick Punto and Skip Schumaker hadn’t spurned the Dodgers in free agency to sign with Oakland and Cincinnati, respectively.

You might as well throw Mark Ellis into that group as well. He seemed destined to land a starting gig somewhere after a productive 2013 campaign at the plate and in the field. When the Dodgers signed 28-year-old Cuban infielder Alexander Guerrero to a four-year contract, Ellis’ best opportunity to start no longer resided in Los Angeles.

Yet after the Dodgers declined his $5.75 million option, Ellis signed a one-year contract with St. Louis for $5.25 million. The Cardinals, like the Dodgers, already have a second baseman of the future (Kolten Wong) who has a chance to be the Opening Day starter in 2014. It’s far from certain that Ellis will be able to extend his streak of nine straight seasons with at least 100 starts at second base in St. Louis.

Ellis was willing to accept that uncertainty with the Cardinals. Why didn’t it work out with the Dodgers?

“Things happened,” he said Sunday in Anaheim. “It wasn’t a hard decision for me. I’ll leave it at that.”

Ellis said the Dodgers offered him a one-year contract. So did the Cardinals, but “it wasn’t hard to choose one offer from the other” and “role had nothing to do with anything,” he said. In other words, the decision was based on money.

Even if the Dodgers’ monetary offer could have been considered an insult, Ellis would never say so. He’s not that type of person. For what it’s worth: Ellis didn’t consider the offer an insult.

“I have no hard feelings toward the Dodgers,” he said.

Some bullet points for an International Holocaust Remembrance Day:
• For what it’s worth MLB.com reports that the Yankees aren’t likely to pursue Stephen Drew. The Dodgers can afford Drew, but to sign him they would have to forfeit their 2014 first-round draft pick to the Boston Red Sox.

• The NL West might be the league’s deepest division.

• MLB.com caught up with Paco Rodriguez in Miami.

• ThinkBlueLA.com has an update on Dodger Stadium renovations.

• Who would make the all-time single-season Dodgers team?

• Even though Selig solved problems that he helped to create, writes Craig Calcaterra of NBCsports.com, “really, how many leaders actually think about, learn from and ultimately solve the problems they created? Not a ton.”

• How well do umpires call balls and strikes, and which umpires are the best and worst? BeyondTheBoxScore.com investigates.

• Javiera y Los Imposibles turned Billy Idol’s “Eyes Without a Face” into something new and cool. Check it out: