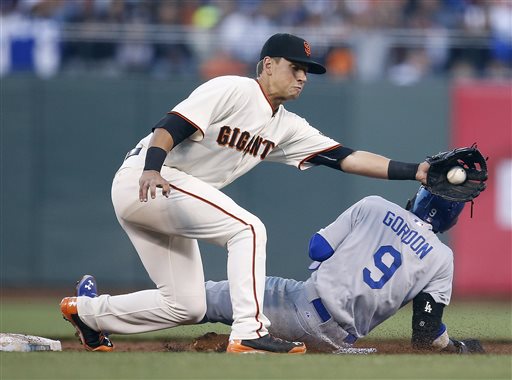 Tim Dierkes of MLBTradeRumors.com reported Monday that the minimum service time to be considered a “Super 2” player in 2014 is two years, 133 days. At two years, 154 days, Dodgers second baseman Dee Gordon is projected to make the cut.

What does that mean, and who should care?

Players with at least three but less than six years of Major League service are considered arbitration eligible. Additionally, a player with at least two years but less than three is eligible for arbitration if he has accumulated at least 86 days of service during the immediately preceding season and ranks in the top 22 percent in total service in the two-to-three-years service class; these players are referred to as “Super Two” players. … That 22 percent of players will be eligible for arbitration four times instead of the standard three times. Also bear in mind that for MLB purposes, 172 days is the equivalent of one year of Major League service time.

So, it looks like Gordon will be eligible for arbitration this off-season. If he’d spent even three weeks in the minors, he would have had to wait another year to hit arbitration eligibility.

By the numbers, Gordon is an interesting case. He made the National League All-Star team, stabilized the top of the Dodgers’ lineup, played occasionally great and usually good defense at second base, stole an MLB-best 64 bases and hit an MLB-best 12 triples.

The bad: Gordon’s .326 on-base percentage is rather low for a leadoff hitter, and his 107-to-31 strikeout-to-walk ratio is particularly high. If Gordon walked more, his OPS-plus would be higher than 101, which indicates he is just above a league-average hitter. (For comparison’s sake, Andre Ethier — who was benched largely because of his offensive struggles — finished 2014 with an OPS-plus of 97. Scott Van Slyke led the Dodgers with 157). His 12 errors trailed only the Mets’ Daniel Murphy among all NL second basemen. Twelve errors aren’t bad for someone who had never played the position before last year, but it was still better than just one of his peers in the Senior Circuit.

So there are some holes to be exploited in Gordon’s case, should it reach arbitration. That doesn’t happen often, but it would be interesting to see what numbers are exchanged if it gets to that point.

Gordon is represented by the Beverly Hills Sports Council.