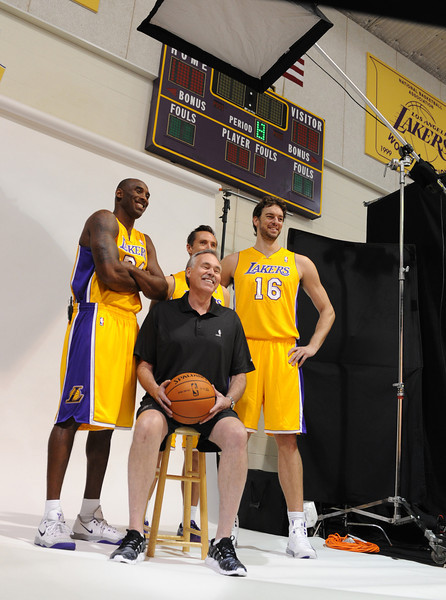 “He told me, ‘It’s a little bit different,’ ” D’Antoni said after the first of the Lakers two practices Sunday. “I go, ‘Yeah, it feels different.’ ”

The Lakers spent all of last year’s training camp under Mike Brown learning elements of the Princeton-based offense, a complicated system based on cuts, passing and various reads based on how opposing teams defend. The Lakers then fired Brown following a 1-4 start and brought in D’Antoni, whose pick-and-roll heavy offense provided a stark contrast both in its pace and simplicity.

The Lakers had little time to learn it. Nash, who ran the offense well enough to earn two NBA MVPs in four seasons with the Phoenix Suns, stayed sidelined for seven weeks because of a fractured left leg, leaving the Lakers without a significant piece to build offensive chemistry.

“We never really ran Mike’s system last year,” Nash said. “It was more a hybrid. I think that’s part of finding an identity is that through personnel, no training camp and very little practice time with all the injuries, it was hard to get Mike’s system going. It was hard to find that identity. So we already are starting to form an understanding of what he wants and how we’re going to play, which is greater than last year.”

Meanwhile, the Lakers openly bickered at seemingly everything. Players balked at D’Antoni’s fast-paced system. Howard lamented not being featured enough on offense. The Lakers remained frustrated when the litany of injuries never ended.

“It was hard to really feel a lot of positive energy,” Nash said. “It always seemed like a challenge for us. This year it feels a little bit more like a team. Who knows how good we’ll be. But the early energy and vibe is really positive.”

The Lakers see that in various ways.

D’Antoni estimated about “90 percent” of the Lakers’ roster participated in the team’s informal workouts in the past month. Nash, who played four seasons under D’Antoni in Phoenix, praised how he finds the right balance in training camp between teaching and ensuring enough rest to prevent burnout. Aside from the two-a-day sessions, D’Antoni’s practices last two hours and entail a mix of film study, individual drills and full-court scrimmages in an efficient manner.

What difference will a full training camp do for D’Antoni?

“The difference will be we won’t have to hunt and peck and go through each personality,” he said, “and figure out what gets them going and what doesn’t.”

The Lakers went through that process last year with mixed results. D’Antoni featured Gasol as a reserve in favor of Earl Clark both because of Gasol’s ailing knees and D’Antoni’s preference for a smaller and quicker lineup. Bryant took over ball-handling abilities, while Nash became a shooting guard in hopes to create an offense less dependent on Bryant. The Lakers soon closed out the season 28-12 by leaning on Bryant’s heroics and a more post-oriented game with Howard and Gasol.

“As successful as we were the second half of the season … we never found an identity,” Nash said. “We’d always find a way to win some games probably on some talent. But there was never any confidence or identity among the group. I think we can form an identity and an understanding on how he wants us to play. I think he’s looked at the roster and has had an imprint on this roster. Then we can find a way that suits the collection.”

That roster features a wide crop of young and athletic players on one-year contracts, including Nick Young, Wesley Johnson, Jordan Farmar and Xavier Henry, eager to earn a spot on the rotation and possibly a long-term deal. The Lakers also have center Chris Kaman, a 10-year veteran that remains dependable on mid-range jumper and pick-and-roll plays. Of course, the Lakers don’t have the drama surrounding Howard’s future remaining a constant backdrop.

“There’s a lot of new guys and one guys who want to maximize their opportunity and find out what their role is going to be and fight for that role,” Gasol said. “Veteran guys are all eager to prove ourselves and continue to be the best we can be and be the top players in the league. We want put it all together and create that chemisty, bond and unity.”

But will that be enough?

Bryant remains sidelined because of a torn left Achilles tendon. Gasol and Nash will miss the second portion of the Lakers’ three two-a-day sessions as they recover from their respective hamstring and knee injuries. The Lakers may have a good-riddance attitude toward Howard both for his attitude and never really fitting in with the Lakers. But his departure to Houston coupled with Metta World Peace being waived through the amnesty provision leaves the Lakers with a dropoff in talent.

Can the Lakers overcome that?

“It’s going to have to if we want to be successful and exceed expectations,” Nash said. “The group is going to have a real cohesion and spirit about it in order to overcome the drop in talent. But it’s exciting to have another opportunity after last year. Not only was last year unsuccessful, it was also painful. It wasn’t a lot of fun and positive as it should be.”