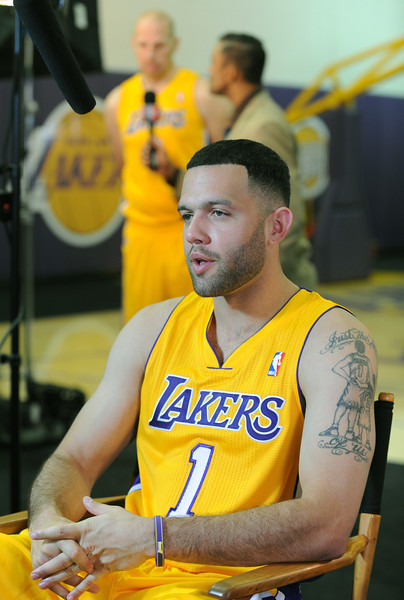 The purple and gold backdrop looks the same. The Lakers’ storied championship history hasn’t changed. Plenty of familiar faces at the team’s practice facility in El Segundo are still there, ranging from Kobe Bryant, Pau Gasol and various team officials.

But as Jordan Farmar begins his second stint with the Lakers, one significant thing remains different.

Phil Jackson’s triangle system may have helped the Lakers win five of his 11 NBA championships, including two for Farmar. But he always preferred a much faster-paced style offense, such as Mike D’Antoni’s, to tap into his playmaking instincts.

“I feel like my minutes on the floor, I’ll be able to be more impactful on a personal level,” Farmar said recently in an interview with this newspaper. “While I’m on the floor, I’ll have more responsibility. The ball is going to be in my hand and I’ll be making more decisions and taking more shots and being more aggressive rather than you hit the wing and go in the corner and play off of there. It’s a completely different system.”

Of course, the Lakers as a whole were in a much better position during Farmar’s four-year stint here (2006-2010) when he played as a key reserve in the Lakers’ back-to-back championship runs (2009-10).

The Lakers are a season removed from a first-round sweep to the San Antonio Spurs, and face plenty of uncertainty. That includes how Bryant will recover from a torn left Achilles tendon, how the Lakers absorb a drop-off in talent from the departures of Dwight Howard (free agency) and Metta World Peace (amnesty provision). Though Gasol and Steve Nash say they have fully healed from their respective knee and hamstring injuries, they’ll still have to prove they can successfully navigate through a taxing 82-game season.

Farmar also left the Lakers via free agency in 2010 to New Jersey partly because he didn’t want to play at the backup point guard spot again behind an aging Derek Fisher. Incidentally, Farmar returns to the Lakers competing for the backup point guard with Steve Blake to play behind an aging Nash. But the 27-year-old Farmar hardly regrets the route he’s taken that landed him back in his hometown.

“Going into my exit meeting, if they said, We’ll give you a chance to grow and your role will expand next year,’ then I would’ve loved to stay here,” Farmar recalled regarding his meeting with general manager Mitch Kupchak and Jackson after the Lakers won the 2010 NBA championship. “But it was pretty much like, ‘We had a good thing going and your role is staying the same.’ At that point, I would’ve gone to my fifth year in the NBA without any real opportunity for growth. I wanted to see what else was out there. 20/20 [hindsight] is always better to look back and said, ‘If I did this, X, Y and Z, it would’ve happened.’ But you never know. In terms of my personal development as a player and as a person, it was good for me.”

That played out in various ways.

First, the professional. After signing a three-year, $12-million deal with the Nets in 2010, Farmar averaged a career-high 10.4 points on 46.7 percent shooting in his second season. After Farmar was traded to Atlanta and waived, he signed with Anadolu Efes of the Turkish League to a three-year, $10.5 million deal. During that stint, Farmar learned what it was like to take game-winning shots and lead a team. He also took on a larger defensive role. With an Nash’s declining speed and Bryant’s possible limitations, Farmar could be called upon this year to slow down elite point guards, such as Chris Paul, Russell Westbrook and Tony Parker.

“I just learned how to put an emphasis on [defense] every time down and using my body, quickness and athleticism on that end of the floor,” Farmar said. “There’s a lot of quick, creative fast point guards in the Western Conference and in the NBA period. It’ll be my job to be one of the guys out there trying to slow them down. Create some havoc and give them some problems.”

“Annoy them and stay physical and use your body, foul when it doesn’t hurt the team. Make them take tough shots. They’re going to get high volume and going to shoot a lot and have a lot of opportunities to be successful. You try to make each one as tough as possible.”

Second, the personal. For all the cultural enrichment the former Woodland Hills Taft High and UCLA product felt living in Los Angeles, Farmar wanted to grow by not confining himself to a bubble. He soon married former UCLA and professional soccer player Jill Oakes, and now have two children. Farmar, who is Jewish, lived in Istanbul during his stint in Turkey, a predominantly Muslim area.

Now that the 26-year-old Farmar has returned to his hometown, he sounds eager to settle down.

“That would be awesome,” said Farmar, whose $1 million deal will expire after this season. “That’s the plan. We’ll see how it works out. I got faith.”

The Lakers do, too.

After all, D’Antoni said he always envisioned Farmar as a perfect fit for his system.

“What he does, you can already see,” D’Antoni said of Farmar. “He’s going to be very effective this year. The biggest thing is his toughness. Along with Blake, he’s just coming at you. Then you can say, he shoots the ball really well, he’s quick, he’s feisty. He has good court vision.”

Farmar’s vision soon sharpened when he realized he wanted to return to Los Angeles. But it took him leaving the area and growing elsewhere before fully appreciating his roots.

“At the time,” Farmar said, “that was a choice I needed to make.”

And one he believes has and will benefit him in the long run, including this season with the Lakers.