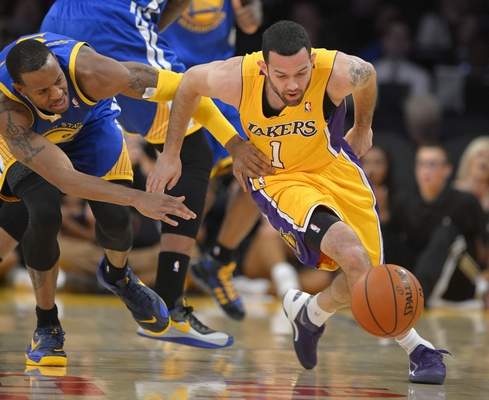 1. Pau Gasol played his best game of the season. For here on out, Gasol should donate every game to charity. With Gasol promising to give $1,000 to UNICEF for relief efforts surrounding the Philippines typhoon, his 24-points and 10 rebounds lifted both the Lakers and the embattled country. Meanwhile, former Lakers coach Phil Jackson will donate $1,700 based on the $50 he pledged for every point and rebound. But it could’ve been more had Gasol taken a charge, which would’ve prompted Jackson to donate an additional $1,000.

Oh well. Gasol still played as if his performance actually affected the livelihood of others in need. Gasol showed more aggressiveness looking for his shot. He scored in a variety of ways, including mid-range jumpers, post moves and drives to the basket. Gasol’s edge also could stem from improved health in his knees and feet. Whatever the case, Gasol should walk away happy both for his effective play and the positive affect it had on others.

2. Jordan Farmar and Nick Young provided a one-two punch off the bench. The duo earned the nickname “Peanut Butter and Jelly” after playing together in a high school club team that featured Young gunning and Farmar playmaking. Fast forward nearly a decade later, and Young and Farmar showed that same chemistry with the Lakers. Their combined 35 points on 13 of 24 shooting featured the pair scoring 10 of the Lakers’ 20 second quarter points that helped break a game wide open in the final two minutes of the frame.

It all started and ended with Young sinking a 3-pointer. In between, Farmar tapped into his playmaking by converting on an open layup and jumper. His defensive rebound then led to Young’s trey that left everyone at Staples Center shouting. The Lakers built off that momentum in the fourth quarter with some more doses of Swaggy P.

3. The Lakers’ defense sharpened. Without Stephen Curry (concussion) and a limited Andre Iguodala (played only 28 minutes because of a strained left hamstring), the Warriors no longer had a sizable floor spacing advantage. Still, the Lakers showed great defensive discipline in several areas. Klay Thompson’s 19 points came on only six of 20 shooting, showing the Lakers closed out early and often along the perimeter. David Lee’s 21 points on 7 of 17 shooting showed Gasol, Shawne Williams and Jordan Hill making a concerted effort to force him to work for his points. The Warriors still outrebounded the Lakers, 50-36. But the Warriors didn’t take advantage of that both because of the Lakers’ strong shooting (47.6 percent from the field and 45.8 percent from three-point range) and holding the Warriors to a bad shooting night (41.5 percent).

This played out differently in the Lakers’ 125-94 loss Oct. 30 in Golden State featured a whole lot of elements that showecased the Lakers lack of defensive discipline. Thompson bombed a career-high 38 points on 15 of 19 shooting and 5 of 7 from 3-point shooting. Lee muscled his way inside with 24 points on 8 of 13 shooting. Golden State made the Lakers suddenly look old with 25 fast-break points. This showed how the Lakers have a come a long way since the beginning of the season.

4. Jordan Hill got in early foul trouble, but he still played effectively. Even though he picked up his fourth foul midway through the third quarter, Hill still compensated for when he was on the floor. Hill provided all the ingredients that’s made him so critical, posting 10 points and nine rebounds in 32 minutes.

5. Steve Blake continued to play solid. He became a little too obsessed with throwing lobs. But Blake’s 14 points on 3 of 6 shooting and five assists reflected him remaining dependable with his court awareness and aggressiveness.