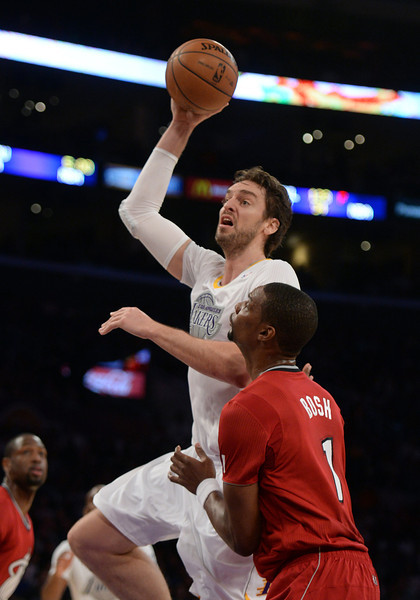 Both centers Pau Gasol and Chris Kaman are considered game-time decisions when the Lakers (13-17) host the Philadelphia 76ers (8-20) Sunday at Staples Center.

Kaman suffered a moderate sprain in his left ankle in the final minute of the Lakers’ 105-103 loss Friday to the Utah Jazz. Gasol sat out two of the past four games because of an upper respiratory infection. Lakers coach Mike D’Antoni said neither of them practiced on Saturday.

Gasol hasn’t spoken to reporters since a visit with an eye, nose and throat specialist on Thursday showed his respiratory illness worsened. Kaman didn’t talk on Saturday, either, but he appeared downtrodden about both his injury and inconsistent playing time.

“It’s pretty favorable,” D’Antoni said. “He feels better about it. The swelling’s not too bad.”

If neither Gasol or Kaman play, Jordan Hill will likely start along with Shawne Williams. Robert Sacre would likely receive significant minutes off the bench.

“You just have to stay mentally prepared,” Sacre said. “Obviously it’s tough. You never know when you’re going to go in. But you have to make sure you’re ready to go. When your name is called, you have to be prepared.”

Kaman posted 19 points and 10 rebounds in the Lakers’ loss to Utah, but has sat out of 13 of the Lakers’ 30 games because of D’Antoni’s preference for having an interior defender (Hill, Sacre) or a stretch forward (Williams). D’Antoni has also compared Kaman’s skillsets on pick-and-rolls, mid-range jumpers and in the post comparable to Gasol and argues both need significant minutes to provide their services.

“Chris fell out of the rotation over because of Robert had with five-six minutes of defense and hard dives,” D’Antoni said. “I was never disappointed with Chris. Chris is good. He just needs enough time to be able to play, just as Pau needs enough time to be able to play, as does Jordan Hill with his role. He’s unique and different so he’s going to play. We have a little bit of a cat and mouse game and see how it feels. That’s something we keep looking at and get better at.”

The Lakers have lost four consecutive games, but have a three-game stretch this week at home against teams with losing records. They include Philadelphia (8-20), Milwaukee (6-23) and Utah (9-23).

Chris Kaman has a “moderate” sprain in his left ankle