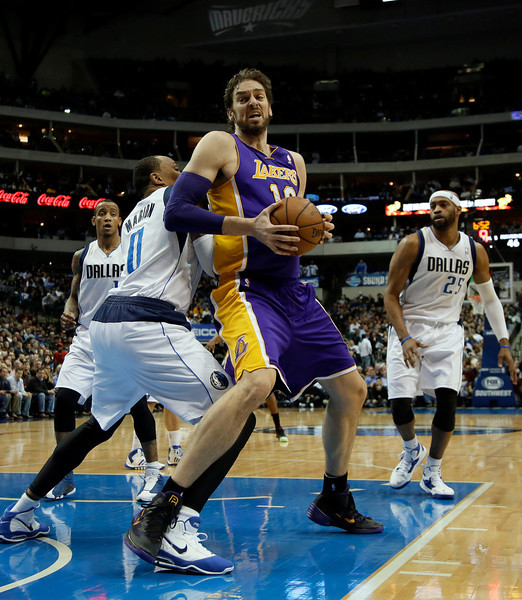 Dallas Mavericks’ Shawn Marion (0) defends against a move to the basket by Los Angeles Lakers’ Pau Gasol (16) of Spain as Vince Carter (25) and Monta Ellis, left rear, watch in the first half of an NBA basketball game, Tuesday, Jan. 7, 2014, in Dallas. (AP Photo/Tony Gutierrez)

DALLAS — Pau Gasol sat in the Pantages Theatre in Hollywood last Saturday night, watching “The Lion King” musical with his parents and younger brother in hopes to experience no worries for the rest of his days.

At intermission, though, Gasol turned on his cell phone and logged onto Twitter. Then, he learned through a false report from KSPN-710AM that the Lakers traded him to the Cleveland Cavaliers for Andrew Bynum.

“I was getting all these messages, ‘Farewell, Pau. Thanks for all your services,” all that stuff,” Gasol recalled after the Lakers’ 110-97 loss Tuesday to the Dallas Mavericks at American Airlines Center. “I guess it’s good to get a heads-up a day before. Most guys don’t get that.”

Most guys also don’t get traded essentially three times only for the deal never to happen. But such is the circle of life for Gasol. The Lakers shipped him over two years ago in a deal that would’ve landed them Chris Paul until the NBA decided otherwise. The other two scenarios stemmed from inacurrate media reports, both during the 2011-12 season and this past week.

Gasol still hasn’t expended his nine lives with the Lakers. Cleveland traded Bynum to Chicago for All-Star forward Luol Deng and a flurry of draft picks.

“It feels good to survive and live to fight another day,” said Gasol, who posted 15 points on only 5-of-14 shooting and 13 rebounds. “I’d like to continue to be here. But that’s not up to me.”

The Lakers had negotiated last week with Cleveland on a deal involving Gasol, but they held firm they would only do so if they received valued young players and draft picks. The Lakers had no interest in making the deal solely to waive Bynum, a move coupled with Gasol’s departure that would’ve secured $20 million in luxury taxes and ensured the team falls below the luxury tax threshold. Still, the Lakers could deal Gasol leading up to the Feb. 20 trade deadline.

“There will be other rumors and potential trades coming up, but I can’t really worry about it,” said Gasol, who’s making $19.3 million in the final year of his contract with the Lakers. “I just need to continue what I’ve been doing, which is come in and be ready to play.”

Gasol described Monday evening as “quiet” and “pretty calm,” but he didn’t even know if he was boarding the team plane en route to Dallas earlier in the day.

“Nobody was approaching me and I didn’t get any calls,” Gasol said. “I packed my bag like I was going on the plane and just doing my job. But the thought crossed my mind.”

It also crossed Gasol’s mind that the false tweet he read during intermission “affected the rest of the show.”

Did Gasol sing “Hakuna Matata” and adopt a problem-free philosophy?

“That would’ve been a good way to go,” Gasol said, laughing. “But that’s how I approach things anyway most of the time.”