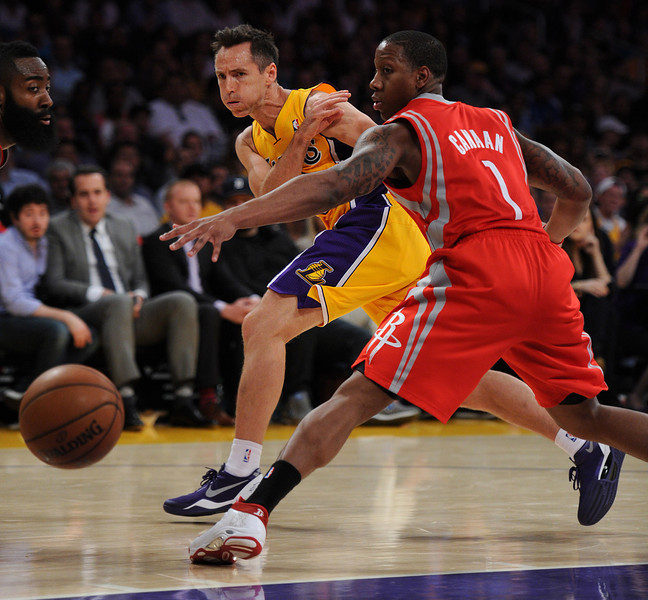 Lakers#10 Steve Nash passes the ball around Rockets#1 Isaiah Canaan in the first half. Nash would go on to become the 3rd all-time leader in assists later in the first half. The Houston Rockets traveled to Los Angeles to play the Lakers in a regular season game at Staples Center. Los Angeles, CA. April 8, 2014 (Photo by John McCoy / Los Angeles Daily News)

His passes showed Steve Nash’s brilliance. His movement showed how Nash has maximized greatness out of a 40-year-old body. The “bite” that he described feeling in his hamstrings revealed his fragility. His uncertain future revealed the never-ending frustration surrounding Nash’s roller coaster through two seasons with the Lakers.

On the same night Nash eclipsed Golden State coach Mark Jackson for third place on the NBA’s all-time assists list, he also revealed that this might mark the final game of a failed Lakers season that entailed a 145-130 loss Tuesday to the Houston Rockets at Staples Center.

“Because I had a pretty good setback today, I probably won’t play again,” Nash said. “If I get a good recovery over the next week, I’d love to play again. A big goal for me was not to go into the summer injured. The fact that I had a setback today was frustrating.”

But it was something he was well aware could happen. Heck, Nash even admitted that Lakers coach Mike D’Antoni changed his mind to play him despite Jordan Farmar returning from a strained right groin injury that kept him sidelined for 11 games so he could reach the record. Nash even anticipated beforehand that he should sit out to ensure a full offseason where he appeared fully healthy.

“I just wanted to hang on and try to get this one over with,” Nash said.

There were several reasons.

The Lakers could waive Nash this offseason via the stretch provision, ensuring that his $9.8 million remaining on his contract extends through three years. Although the Lakers likely will keep Nash so his salary gets off the books in one season, he remains cognizant his uncertain health complicates such variables. Nash invited a high school student based out of Atlanta that fought cancer both to morning shootaround and the game. Even when D’Antoni recalled Nash reporting to him early in the game that “his hamstring was on fire,” the Lakers guard sounded reluctant in going to the sideline.

“If I come out, I might not ever go back in,'” D’Antoni recalled Nash saying. “I go ‘Well, either it’s the record or we’ll carry you off the floor.’ That’s the way it went. They missed so many shots and it took a while to get it.”

Nash came off the bench with 2:24 left in the first quarter and didn’t tally the six assists needed to break Jackson’s record until he threw a cross-court pass to Jodie Meeks for an open dunk with 2:14 remaining in the second quarter. In between, Robert Sacre and Wesley Johnson missed a flurry of open looks at the basket and along the elbow. Jordan Farmar and Nick Young converted on three-pointers. Jordan Hill sank a mid-range jumper. Meeks finished at the rim two times.

“Everybody was shooting the ball every time he passed it,” Farmar said. “They were trying to get him his assist. That let him get out the game and just enjoy it.”

The 18,131 fans enjoyed it, giving Nash a rousing ovation when he exited the game with 1:16 left in the second quarter and ending a three-point, five assist performance.

“All of this is beyond my imagination and wildest dreams,” Nash said.

D’Antoni sure enjoyed it, seeing the man who once won two MVP awards with him in Phoenix provide another notch to his resume. He also sounded more impressed how Nash kept the Lakers into the game until his second-half absence spurred the Rockets to score 48-third quarter points.

“What’s remarkable is how he can run on one leg and keep us in the game,” D’Antoni said. “That’s his greatness.”

And Nash’s teammates sure enjoyed it, marveling how a 18-year veteran still finds meaning in playing an otherwise pointless game during a miserable season.

“It’s Nash. He’s a warrior. 40 year old out there still trying to give it your all. Can’t do nothing but tip your hat to them,” Lakers forward Nick Young said. “It’s well deserved. Good things happen to good people.”

And yet, a terrible thing happened to Nash.

In the interest of supporting a depleted roster and chasing a record, Nash may have compromised his long-term future.

“It’s too bad everything comes to an end,” D’Antoni said. “He’s had a great career, and it was great he got that tonight.”

Yet, Nash offers no regrets, mindful that his motives remained pure.

“I don’t play for the records,” Nash said. “I play because I love to play and love to compete and help the team.”

And just as he has done countless times, he sounds determined to do that again.

“Hopefully this is something I can work through quickly,” Nash said. “If I can recover enough, I’d love to play again. But I’m highly doubtful.”