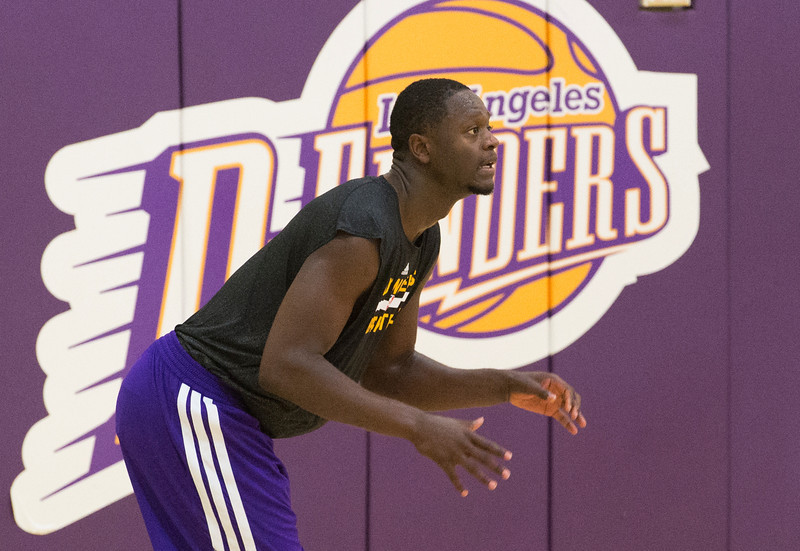 “Julius Randle of University of Kentucky is interviewed by the media after a pre-draft workout at the Lakers gym in El Segundo, CA. Tuesday June 17, 2014. (Thomas R. Cordova-Daily Breeze/Press-Telegram)”

Amid his excitement over playing for his favorite team (Lakers) and teaming up with his childhood idol (Kobe Bryant), Kentucky forward Julius Randle offered some sobering news.

It turns out Randle may miss some time this offseason stemmed from an injury in his right foot.

“They might want to do a surgery,” Randle said of a pending meeting with the Lakers’ training staff. “But I honestly don’t know what to expect. I know if I do a surgery, I’ll be ready before the start of training camp. But it’s honestly up to the team doctor and see if it’ll be good for me and what the risk is.”

The Lakers downplayed Randle’s injury that stemmed from breaking his right foot in the second game of his senior season at Prestonwood Christian Academy in Texas. A screw was then inserted into the foot. But Randle did not miss a game for the University of Kentucky where he posted a league-leading 24 double doubles.

Randle’s bruising 6-9, 250-pound frame has sparked endless comparisons to Memphis forward Zach Randolph, who is known to bully his way into the paint.

“I like it, but I try to be my own player,” Randle said. “I’m my own self. I don’t model my game after anybody. I always relied on being myself and going from there. But I couldn’t be more humbled to be compared to a great player like that.”

Randle also couldn’t have been more humbled for the Lakers to draft him with their seventh overall pick. He reported feeling most excited working out for the Lakers two weeks ago, even sneaking in a session the night before to soak in the atmosphere surrounding a franchise steeped in championship tradition. Even though the Lakers are coming off their worst record in L.A. franchise history, Randle called the pairing a “perfect fit.”

One of those ways could entail expanding his game.

Randle only attempted 18 three-pointers in his freshman season, which he attributed toward playing on a star studded Wildcats team that advanced to the NCAA Final against UConn. But Randle impressed the Lakers in his individual workout where he made a flurry of mid-range jumpers.

“I think I’ll be able to play all over the floor,” Randle said.

He will make that first step by likely traveling to Los Angeles by Sunday. Randle has already exchanged text messages with Bryant. And Randle plans to have clarity soon on how he will treat his foot.

Randle sounded elated and wanted to soak in the moment.

“It feels like home,” said Randle, who reported liking Los Angeles after playing amateur tournaments out here. “It was the place I was the most comfortable with. It honestly felt like the right situation. They didn’t think I would be there at seven. But I was happy to be there at seven.”

NBA Draft: Analysts identify who the Los Angeles Lakers should select with their seventh overall pick