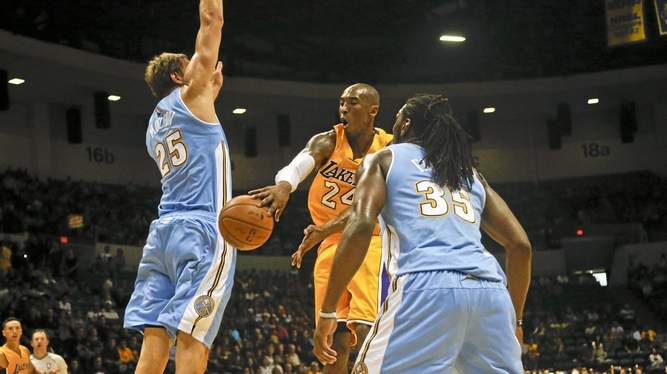 SAN DIEGO — Once Kobe Bryant stepped on the court here at the Valley View Court Casino, he did not wow any fans with any spectacular theatrics.

OK, so his mere presence and starting lineup introduction sparked the 10,108 Lakers fans to cheer him with with the same intensity as a playoff game. But Bryant didn’t follow that up with any jaw-dropping plays that made you wonder how he defied gravity.

Instead, Bryant followed up on a hiccup that entailed an airballed jumper near the top of the key with a vintage performance that will serve a blueprint on how he will try to play out at least the two years remaining on his contract. The Lakers’ 98-95 preseason victory over the Denver Nuggets featured Bryant scoring 13 points on 5 of 12 shooting and dishing out five assists in 21 minutes, all mostly off of the Lakers’ star primarily operating in the post.

“I’ve always played that way,” Bryant pointed out afterwards, his experience with Phil Jackson’s triangle offense through all those championship runs allowing him to operate on muscle memory. It seemed fitting Bryant would make his formal introduction under Byron Scott’s offense in front of two of Jackson’s former assistants in Brian Shaw (the Nuggets’ head coach) and Frank Hamblen (a San Diego residence). But it took Bryant seven seconds or less to show he will play much different than Mike D’Antoni’s system that he eventually grew to dislike.

Bryant actually thrived in D’Antoni’s system, his 27.3 points per game in the 2012-13 season showing how his superb diet and conditioning allowed him to play as effectively as he had in his prime before his left Achilles tendon ultimately collapsed. But with Bryant coming off two major injuries in that Achilles and a left knee, both he and the Lakers wanted him featured in a way that both maximized his skillset and conserved his energy.

Well after Bryant’s five field goals all coming off his signature step-back and pull-up jumpers, he reported feeling “like I could do anything I wanted” and that he “could run all day.”

“It keeps him fresher,” Scott said. “He’s not running all over the place. He’s not running from the hash mark all the way down to the baseline. He’s in a pretty nice confined area that he can really work. He feels that way as well. The one thing he said tonight is that he felt fantastic and didn’t feel tired. It worked.”

Granted, Bryant also felt fresh he played only 21 minutes and sat the entire fourth quarter. Bryant also noted that Scott’s heavy emphasis on conditioning drills during the first week of training camp whipped everyone in shape. But Bryant also appeared remarkably efficient with his movement.

He could have finished with better shooting accuracy. But that should not overshadow Bryant’s effectiveness when he operated in the post. Beyond canning step-back jumpers, Bryant’s post-presence allowed Steve Nash to operate fluidly at point guard. Bryant often moved off the ball and ensured proper floor spacing for Carlos Boozer. When Bryant initially operated in that area, he quickly found open shots for Wesley Johnson and made a nifty bounce pass for Jordan Hill.

Bryant showed unyielding determination all offseason that he would eventually overcome his injuries. But Bryant operating in his sweet spots could ensure he successfully writes his comeback story, his preseason opener serving as a decent introduction.