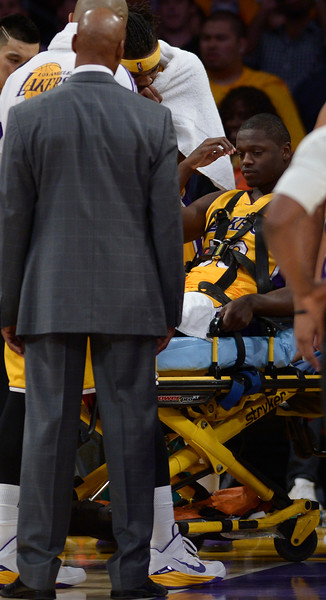 Lakers rookie forward Julius Randle is expected to miss the 2014-15 season after having surgery on his right leg on Wednesday.

This offers a devastating blow to the Lakers on multiple fronts. The Lakers saw promise that Randle could develop into a top prospect after selecting the former University of Kentucky standout seventh overall in this year’s draft. The Lakers already field a depleted lineup with a season-ending injury to Steve Nash (back) as well as ailments to Nick Young (thumb) and Ryan Kelly (right hamstring). And the Lakers have only completed one game in what could become a long 2014-15 season.

Randle injured his right leg midway through the fourth quarter of the Lakers’ 108-90 season-opening loss on Tuesday to the Houston Rockets at Staples Center. After driving into the lane, Randle collapsed on the floor and favored his right leg. The Lakers’ training staff and players immediately attended Randle near the Rockets’ basket. After Randle’s leg was immobilized, he was soon lifted onto a stretcher and taken to a nearby hospital.

Randle only posted two points on 1-of-3 shooting in 14 minutes in his NBA regular-season debut. Lakers coach Byron Scott has also offered public criticism with Randle’s conditioning and work ethic. But the Lakers found Randle steadily developing through training camp where he averaged 8.8 points and 5.8 rebounds in 20.9 minutes in eight exhibition games. After posting a nation-leading 24 double doubles in his lone season at University of Kentucky, Randle showed signs as both a bruiser, mid-range jump shooter and ball-handling forward.

The Lakers plan to file a disabled-player exception to the NBA that will be worth $1.5 million. They are also still awaiting league approval for a disabled player exception on Nash, which is worth about $4.9 million. The Lakers can use both of those tools to acquire two players through trade or free agency at that allotted amount. When Young returns sometime next November, the Lakers will have a league-maximum 15-player roster.

Randle has dealt with injury issues earlier in his career.

In the second game of his senior year at Prestonwood Academy, Randle broke the fifth metatarsal in his right foot in what was considered a season-ending injury. Randle returned for five playoff games and averaged 28.8 points, 15 rebounds and four blocks en route to Prestonwood Academny’s third consecutive state championship. He was then granted an exemption to play in the McDonald’s All-American game.

He then starred at the University of Kentucky and posted a nation-leading 24 double doubles without missing a game. Reports circulated during pre-draft workouts that Randle would need surgery to treat an incorrectly placed screw in his right foot. But the Lakers said their medical reports did not suggest such a thing. Randle also consulted outside medical advice that suggested the same thing.