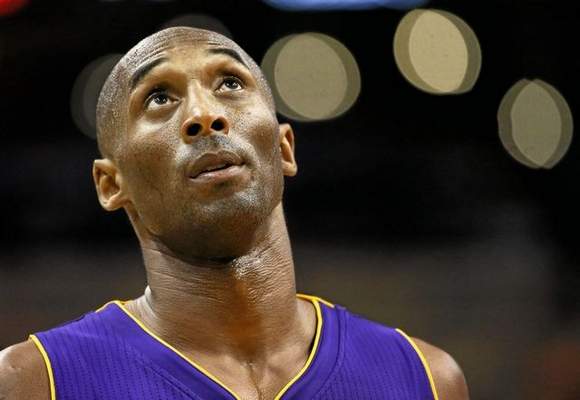 Los Angeles Lakers guard Kobe Bryant (24) looks at the scoreboard during the second half of an NBA basketball game against the Phoenix Suns, Wednesday, Oct. 29, 2014, in Phoenix. The Suns won 119-99. (AP Photo/Matt York)

Kobe Bryant maintained an aura of calmness as he sat by his locker stall, insisting the Lakers’ 0-2 record and his on-court frustration hardly meant he would already lose his cool this early in the season.

But a troubling trend has emerged through the Lakers’ two losses that Bryant called “a big problem.” While Houston and Phoenix have combined to make 28 of 61 from three-point range, the Lakers have gone only 7-of-23 from shots beyond the arc. So how do the Lakers address that?

“Guarding the 3 point shot and shooting more and making more ourselves,” Bryant said.”That’s tough math to overcome when they knock down 16 threes and we knock 4. That’s tough to overcome.”

The Lakers won’t have an easy time solving that issue quickly. The Lakers play against the Clippers tonight in a designated home game at Staples Center, an opponent that features sharp shooting from Jamal Crawford and J.J. Redick. The Lakers then travel on Saturday to Golden State, which features Stephen Curry and Klay Thompson firing away at ease.

It’s hardly surprising Bryant would highlight such an obvious reason for the Lakers’ struggles. But it is notable for another reason. After once calling Mike D’Antoni an “offensive genius” shortly after the Lakers hired him two years ago, Bryant made it clear last year that he did not like NBA teams playing so-called “small ball.” Instead, Bryant said he preferred playing “smash mouth old school basketball.”

Last season, the Lakers finished third in three-point shooting (38.1 percent) on 24.7 attempts per game. But that hardly stopped the Lakers from avoiding their worst record in L.A. franchise history. Meanwhile, Lakers coach Byron Scott has he doesn’t “believe it wins you championships” by putting a heavy emphasis on three-point shooting. Yet, seven of the past eight NBA title teams led the league in both 3-point shots made and attempted.

“We don’t have an abundant amount of 3-point shooters we can throw out there,” said Scott, referring to injuries to Nick Young (thumb) and Ryan Kelly (rigth hamstring). “So we can’t play tit for tat.”

So what can the Lakers do? Bryant suggested a balance.

“I really think the 3 point shot is a big thing,” Bryant said. “It’s a brand of basketball being played. Teams really take the 3. They take the 3 and we take the two or free throws. We’re not a big 3 point shooting team. So we can’t afford to give up 16.”