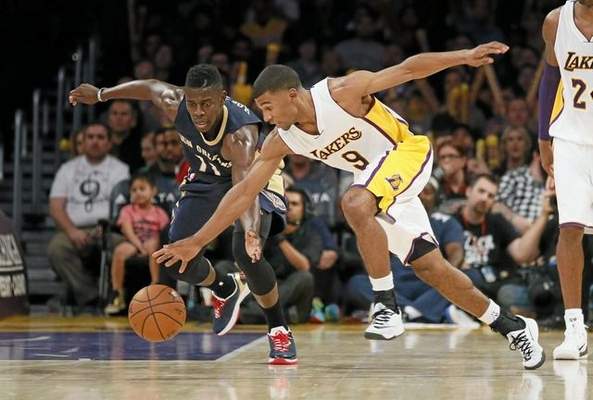 So much uncertainty surrounds the Lakers’ offseason.

But Lakers guard Ronnie Price reiterated his interest in staying with the Lakers even as a third-string point guard.

“I enjoyed being a voice in the locker room. I enjoyed being able to help younger guys. I helped great veterans that can help me. I’d be selfish not to extend that knowledge to players that are younger than me,” Price said. “Of course you want to play. That’s why we do what we do. You want to play. You never know what’s ahead. Whatever role is my role, I’ll embrace it whether it’s being here or the third guard.”

Price averaged only 5.5 points on 34.5 percent shooting and 3.7 assists in 22.8 minutes through 43 games. But Lakers coach Byron Scott granted Price the starting point guard spot over Jeremy Lin after 19 games both because of the persistent losing and because of Price’s defensive toughness.

That praise prompted Price to offer some self-deprecating humor about his reputation taking a beating because of a season-ending right elbow surgery that required surgery.

“Kobe [Bryant] doesn’t want any problems with me,” joked Price, who once played against Bryant with the Utah Jazz (2007-11). “Kobe is a tough guy and competitor and all that good stuff. We verbally go at each other day to day about old battles and upcoming battles, for sure. It’s mutual respect between me and No. 24. That’s about it. I appreciate people considering me tough. But I would’ve loved to have finished off this season without having to sit out. For me, apparently I wasn’t that tough. Something got me and that was the elbow.”

Though he said the elbow “feels great,” Price estimated that he remains “a week or two away from being 100 percent cleared to do whatever I want to do.” For now, Price has remained confined to conditioning drills and shooting with his left hand (he has even dunked in pre-game warmups.

But Price’s defining moment might entail a charge on Portland’s Thomas Robinson that in early January, a sequence that broke Price’s nose and required 11 stitches. He called what happened on the flight home “the best moment” in what he described as a “murder scene.”

“A sneeze set it off,” Price said. “It reopened a wound and blood was going everywhere. I know that’s pretty graphic.”

“That was an honest play right there,” Price said, laughing. “I was trying to stop the ball. I think they threw three lobs in a row on us and the game was getting out of control. They had another fast break going so I had to stop this break. I don’t want another lob thrown on the fact that I lost my shoe. So I’m just going to throw the shoe and hit the basketball out of his hand. But I missed the ball and I missed him. I got fined for it. It happens. But I hope that’s not the main thing people remember.”

Price joked people should remember his missed fast-break dunk. In reality, the Lakers will mostly remember his professional attitude.

He endlessly supported rookie guard Jordan Clarkson and praised his development even if his ascension ate into his role.

“JC did an amazing job. I think the coaching staff was great with his development,” Price said. “You have to give credit to him. He worked his tail off. A lot of rookies don’t get the opportunity, especially second round picks don’t get the opportunity to come in and get that much floor time that JC got this year. I think that was extremely beneficial for him and his career moving forward. I think the NBA now has to acknowledge the fact there is an up and coming young guard with a lot of skill and potential to do great things in this league. I’m a fan. I’m a fan of his game and I’m a fan of him as a person. I think he’s going to be a great NBA player.”

Besides Bryant, Price remained the most vocal in defending and praising Scott for his stern style of coaching.

“He made a great impact on the team,” Price said of Scott. “He stayed consistent throughout the entire year. Most coaches wouldn’t show that consistency that Coach Scott showed that no matter what’s going on or no matter who was playing or not playing, wer’e going to come in and work and stick to the script and keep pressing forward. Some coaches want to try new things and change things up. No, he stuck to what he believes in and that shows a great deal about a person. When things are going south, you stick to the script and stay consistent and you’re straight forward and honest to your players. What else can you ask for an NBA player when you have a coach like that. I appreciate that.”

That explains why the Lakers will want to re-sign Price so long as he serves as a third-string point guard. After all, the Lakers plan to retain Clarkson and may upgrade the point guard position through the NBA Draft or free agency.

“Of course you want to play. That’s why we do what we do,” Price said. “You want to play. But you just never know. You never know what’s ahead. Whatever role is my role, I’ll embrace it, whether it’s being here as a third guard and being kind of a security blanket or whatever you want to call it. I’m at the stage of my career where I want to win and I want to be able to help a team out in whatever needs they need me to do so. That’s something I would love to come back and be a part of this organization next year. We’ll see how it works out.”