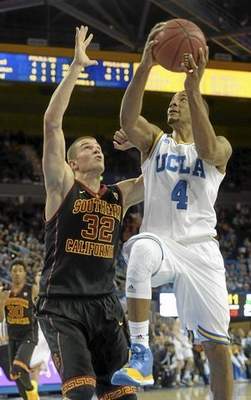 In this age of one-and-done, college prospects from around the country have declared themselves eligible for the NBA draft for one simple reason. They believe their unmatched talent will lead them to riches far more important than an unfinished degree and incomplete training .

But UCLA’s Norman Powell found more value in staying, his four years wearing the Bruin uniform marking the main reason why he feels confident an NBA team will both select him either in the first or second round and see him make an immediate impact.

“I’m NBA ready,” Powell said after working out with the Lakers on Tuesday at their practice facility in El Segundo. “Everything I’ve gone through with having to sit the bench, wait behind people and work my opportunity. I’m seasoned and I’m able to fit into any role.”

Powell called himself a two-way player and a combo guard. He envisioned himself as someone capable of defending point guards, shooting guards and small forwards. He praised his athleticism and defense. Most importantly, Powell found validation in his draft stock after completing six workouts and planning to train in 15 more.

It all traces back to his experience with the Bruins. He averaged a steady 16.4 points per game through four years. He made hustle plays, while allowing Zach LaVine, Shabazz Muhammad, Kyle Anderson, Jordan Adams to take the spotlight in different seasons. Although he credited the team’s effort for its unexpected Sweet 16 run, Powell said he “led the way being a senior.”

“I lead by example,” Powell said. “I think the guys made it really easy. They see me giving 110 percent on the floor, competing, doing all the little things, they followed in line, they know I’ve had the experience and I’ve been here before, what I do they need to do and that’s what they did. They followed me and competed and left it all out there every game.”

Powell hopes to provide that same role with the Lakers, calling it “a dream come true” and “a surreal feeling” to work out for his favorite team as he grew up in San Diego cheering for them. But after also working out for Chicago, Houston, San Antonio and Philadelphia, Powell seemed well aware plenty of NBA teams will covet his services. That may not have been possible had Powell not stayed all four years at UCLA, a time that taught him everything he believes he needs to make the next step.

“It’s what I’ve been wanting to do my whole life,” Powell said. “I’m going at it with a lot of hunger, a lot of passion and determination to prove that I belong and prove that I’m a first round pick. It’s business, but it’s also fun. I’m enjoying the ride.”