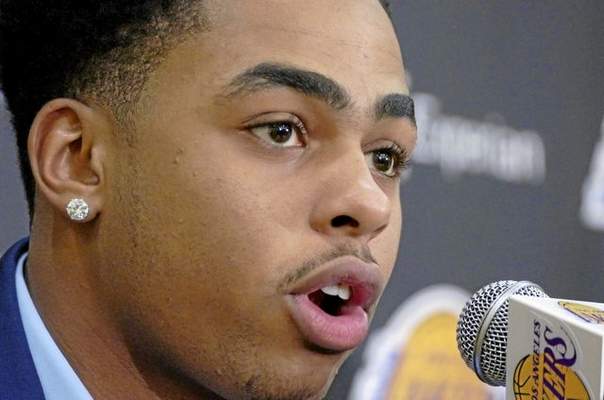 How they arrived with the Lakers seems different, though both D’Angelo Russell and Jordan Clarkson may finish their respective journeys the same way.

Russell officially became a Laker five days ago after selecting him second in the 2015 NBA Draft. He sounded determined to meet the high expectations that includes becoming the Lakers’ next great point guard since Magic Johnson and eventually having his jersey join other Lakers luminaries on the Staples Center rafters. Clarkson became a Laker nearly a year ago after paying $1.8 million to Washington to secure his rights to the 46th pick. Since then, Clarkson has proven countless teams wrong for passing on him by earning a spot on the NBA’s All-Rookie first team.

Amid those different stories, Russell sees the same mentality on how both he and Clarkson stepped on the court eager to show their growth. Hence, Russell expressed confidence both he and Clarkson will play well together in a dynamic that will involve sharing ball handling duties with Kobe Bryant.

“He’s an explosive guard, fast. He’s bigger than most guards,” Russell said. “I look at it more as he’s a guy that I can definitely play with. He’s versatile also, he can play off the ball, with the ball. So, I mean, I feel like it’s just an advantage to be young and we can grow together.”

Lakers coach Byron Scott has held off on outlining how he will use three guards until the team fills out its roster once free begins at 9:01 p.m. PST on Tuesday. After all, if the Lakers acquire a marquee frontcourt player, their offense will still partly predicate on post play. If the Lakers strike out, perhaps they adopt the small-ball principles that caught on everywhere else in the NBA.