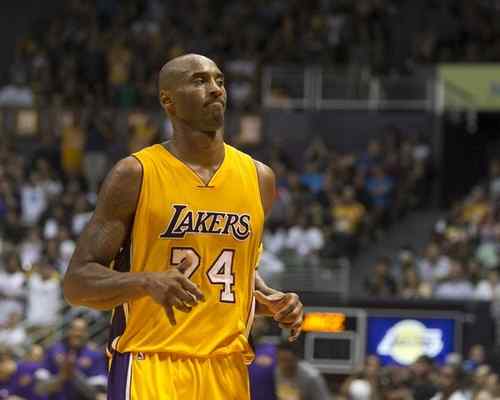 Los Angeles Lakers guard Kobe Bryant (24) is seen on the court during the second half of an NBA preseason basketball game against the Utah Jazz on Oct. 6 in Honolulu. AP Photo/Marco Garcia

The workload for Kobe Bryant scaled back. After completing a full practice on Sunday, Bryant practiced for most of Monday’s two-hour session before receiving treatment on his sore left leg. Bryant was not on the practice floor when the Lakers opened practice to the media during a scrimmage that lasted about a half hour.

Accounts vary on how much Bryant practiced. The Lakers said Bryant completed the first hour, while coach Byron Scott said Bryant completed 75 percent of the session, including parts of a scrimmage that was not open to the media. Regardless, the Lakers said that Bryant did not experience any setbacks on his injury that had kept him out for the last three exhibition games. Scott added he is “excited he will be able to play Wednesday” for the Lakers’ season opener against Minnesota at Staples Center.

“He looked good and felt pretty good,” Scott said of Bryant, who has not spoken to reporters since Oct. 11. “He came in early and got a bunch of shots up. Each day he’s getting better.”

Scott reported Bryant looking sharp with his conditioning, shot and rustiness despite staying sidelined since he nursed the injury on Oct. 13 in an exhibition game in Las Vegas. Scott also expected Bryant to participate in Tuesday’s practice, which Scott described as “light.”

With the 37-year-old Bryant entering his 20th and perhaps final NBA season, Scott said he and his star player have finalized his minutes after playing only a combined 41 games the last two years because of season-ending injuries to his left leg and right shoulder.

“We have come to a number we think will be sufficient enough for him to go out there and be productive,” Scott said. “I’m not telling you the number.”

Bryant posted 22.3 points on a career-low 37.3 percent shooting in 34.5 minutes per game last season. Although Scott would not divulge Bryant’s allotted playing time, it appears likely Bryant will average between 25 to 30 minutes per game.

Meanwhile, Lakers guard Marcelo Huertas sat out of Monday’s practice after his recently strained right hamstring bothered him in recent days. The Lakers hope Huertas will practice on Tuesday. But they will remain cautious after the 32-year-old Huertas missed the Lakers’ first five exhibition games because of his injury.