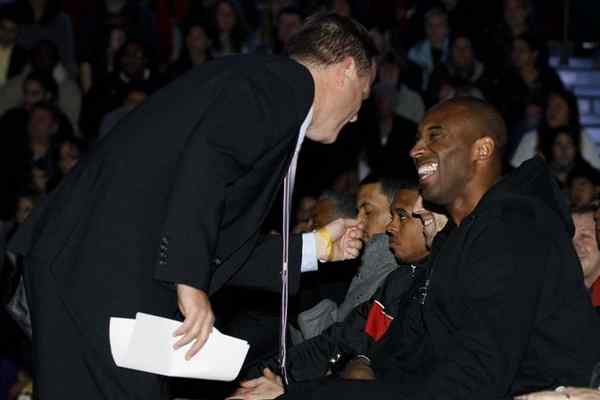 PHILADELPHIA — The news struck Kobe Bryant’s alma mater with the same impact as one of his game-winning shots. The Lakers’ 37-year-old star officially announced this week that he would retire following the 2015-16 NBA season.

“You know something like this is probably coming,” Lower Merion spokesman Doug Young said. “But when it happens, that’s when it triggers the emotions.”

After coaching Bryant through the early stages of his basketball career that ended in a state championship, Lower Merion coach Gregg Downer admitted he did not exactly anticipate his star player determining his future until the last moment.

“I’m surprised,” Downer wrote in an e-mail. “I thought he would wait to eliminate the farewell tour.”

After becoming his key teammate on the Aces’ title run 20 years ago and a close friend ever since, former Aces star Jermaine Griffin believed Bryant would wait until the very end. That way, Bryant could see if a best-case scenario unfolded surrounding his play and the Lakers’ fortunes.

“I thought he would call it after the season,” Griffin said. “So it was surprising when he made the judgement call.”

And after admiring Bryant’s prolific 20-year NBA career from afar, former Lower Merion teammate Evan Monsky simply understood the perils of age, injuries and mileage defeating even the most talented and determined players.

“It’s not surprising to me. It all makes sense. We’re very old human beings,” Monsky said. “But when you’ve done as much as he’s done, he can play as long or as short as he wants.”

Amid that backdrop, Bryant will face an interesting set of circumstances. The Lakers (2-14) will play the Philadelphia 76ers (0-18) on Tuesday at Wells Fargo Center, a game that would usually have more bearing on the teams’ NBA draft lottery chances had this not also marked the last game Bryant would play in front of his hometown.

“I don’t think the timing could be any better,” said Jeremy Treatman, who was once one of Bryant’s assistant coaches at Lower Merion after also covering parts of his high school career for The Philadelphia Inquirer. “The one thing Kobe Bryant never had is a standing ovation in his hometown. He’ll get a killer five-minute standing ovation.”

Even with Bryant’s rich connection to Lower Merion, that has not translated into the City of Brotherly Love ever since the Lakers secured his rights with the 13th pick of the 1996 NBA Draft after trading Vlade Divac to Charlotte.

Bryant heard countless boos when the Lakers played the Sixers in the 2001 NBA Finals, partly fueled when Bryant said he wanted to “cut their hearts out.” The jeers persisted when Bryant won the 2002 NBA All-Star MVP in Philadelphia. That animosity soon prompted Downer to stop going to Sixers games. But Downer will represent about 400 people from Lower Merion that will attend the game in a section that stands behind the basket and is parallel to the Lakers’ bench.

“It should be a good reception,” Downer wrote. “Philly will hopefully do the right thing.”

Others with the Aces program sounded more confident.

“He’ll get an amazing cheer,” Griffin said. “It’ll be his biggest moment in Pennsylvania since winning a high school championship. Today is the day that it comes full circle for him.”

But will that day also coincide with Bryant playing well?

Perhaps the only thing as ugly as the Lakers’ last-place standing in the Western Conference has entailed Bryant’s performances. He has averaged 15.5 points per game, while shooting a career-low 30.5 percent from the field and 20.2 percent from 3-point range in 31.1 minutes per contest. He missed two weeks of training camp, while nursing a bruise in his lower left calf. Bryant then sat out for two games last month amid emerging back soreness.

Downer pointed out that “Father Time always wins,” mindful that Bryant also nursed season-ending injuries to his left Achilles tendon (April, 2013) and left knee (Dec. 2013). But other than hoping Bryant could play around 25 minutes per game, Downer expressed uncertainty how Bryant will fare in reversing his latest struggles. Bryant’s former teammates at Lower Merion also doubted Bryant will suddenly change his high-volume shooting tendencies despite his initial ineffectiveness.

“His game is already embedded in his head,” Griffin. “You can’t switch after doing one thing for 20 years. If he’s out there, he’ll play how he plays.”

“I’m definitely surprised he’s struggling as bad as he is and putting up airballs,” Treatman said. “I guess his body can’t work with the mind and the heart and the brain right now. I’m disappointed to see him go 4-for-20 or 2-of-15. I don’t want him to go out like that. But how can you feel bad about the career he’s had?”

Hence, plenty latch onto the moments when Bryant filled the highlight reels.

“It’s been tough to watch. There’s an expectation that every time he gets on the floor, he’ll be the best player,” Young said of Bryant. “But those flashes of brilliance and the old Kobe will rear its head. He’ll do something spectacular again. He will. I have no doubt at points this season, he will have magical moments where it’s classic Kobe.”

Will that happen against the Sixers? Who knows. But with Bryant officially announcing his retirement, more certainty has emerged on what will mark the beginning of a possible retirement tour.

“It gives Kobe and the fans closure,” Griffin said. “It helps out the fans in being able to embrace and congratulate and give him a nice farewell at each arena Kobe goes to instead of him going to the arena as a villain. He’ll be going there as someone who is cherished and appreciated.”

Lakers’ Kobe Bryant on Philadelphia: “I love that city no matter what”