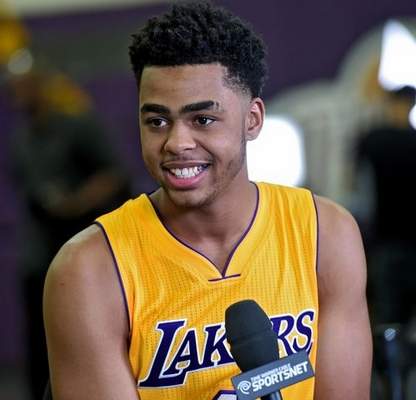 Below is an edited Q&A with Lakers assistant coach Larry Lewis about the development of Lakers rookie point guard D’Angelo Russell. Lewis is Russell’s closest confidant on the Lakers’ coaching staff.

With all the work you have done with D’Angelo, what has been your overall feedback to him?

Lewis: “I focus on game situations. Since the summer, we’ve worked a lot on pick-and-roll stuff. It’s been one of the main topics about his body and getting stronger. That’s what he’s done. One thing about the kid is whatever advice he gets that makes sense, he has a good radar for it. He takes to it like a fish to water.”

Lewis: “For example, in the weight room, it’s very important. When he first came into the door, one of our early conversations involved getting with Tim [DiFrancesco] in the weight room. He’s done that. He’s gotten stronger and he’s going to continue to get stronger. It’s going to be more of a problem for his opponents the stronger he gets.”

What feedback do you give with pick and roll.

Lewis: “He’s already had great court vision. He’s a very willing passer. I still believe with some pieces around him that understand the game like he does and like NBA veterans do, he will be more effective on the floor. He’s only one year out of college. It’s pretty evident he belongs.

I think some of his youth will go away because it’s a man’s game. But if we’re talking strictly basketball and what he does on the court and thinks about the game, he’s very mature. He’s ahead of all the guys in his class with his work ethic, the passes he makes and the way he thinks through the game. Like any rookie and young athlete, he’s going to make some mistakes. But he’s making mistakes that are teaching him different things to recognize. That often determines what not to do. Some things that work on other levels won’t work here at the NBA.”

I see a lot before the game, you and D’Angelo are both working on his outside shooting and working in the post. What’s the end game for him in those areas?

Lewis: “I really am against putting players players in a box. I know that shooting is a big part of the game. I think it’s something that any team he’s going to be on or is on can use. Wherever he plays and whenever he plays, I try to focus on things he’ll be able to use to make him better.

Of course, the game is going to a lot of 3-point shooting. But I also think he’s a good mid-range shooter. He has potential on the block that I don’t think anyone has seen yet. Over the past five or seven games, there have been glimpses of him in the post. But he’s got a lot of talent on the block. I really believe in that. I believe that it’s something that can help us win. Without a doubt, he’ll do that for the rest of his career.”

To what degree will D’Angelo rely on a post game?

And I imagine that basically circles back to why you’re having D’Angelo work a lot in the weight room.

Lewis: “You better believe it.”

How have you seen him handle pressure of both being the No. 2 pick and playing for the Lakers?

Lewis: “I think he’s learning a lot. This is really a different world, not only in the NBA but in Los Angeles as a Laker. This is a different world. I think he is smart enough to know what is important and what is not important. I don’t see him succumbing to a lot of the negative affects that attention can bring on a young person. He’s smart and mature enough to understand that. Now does he have fun? I’m sure he does. He’s a kid. But there’s a lot expected of him. He’s a No. 2 pick. So there should be. But I don’t think he should put so much pressure on himself that it hinders his ability to learn and perform on the court. That’s what I don’t see him doing. That’s why I see he’s taking this in a very good and mature way.”

How have you seen D’Angelo react toward coming off the bench?

Lewis: “I don’t see him reacting to that at all. He knows he’s a basketball player. He’s accepted the fact that he’s in the NBA and there are some pressure situations. But this is something he’s worked for and has been picked to do a job. All he can do is put his best foot forward. I’m here to support that and his teammates support that. His friends and family support him. So all he has to do is accept the learning curve and not get emotional where it rattles him. And that hasn’t happened.”

This might be ridiculous to ask with how early it is. But what do you think of the endless debate about if the Lakers should have taken Russell or [Jahlil] Okafor?

Lewis: “That’s the question that is asked right now. But the most important question to me is as we watch things that teams and players develop, we’ll see. There is a lot of anxious energy. People want things today. It just doesn’t happen that way. A lot of people would like the Lakers to be a championship team today. It takes time to build championship teams. That has yet to be seen.

I really don’t pay much attention to that question. There was a decision made. The pick was ours. We picked a player and now that player is developing. We picked a solid player. There is no question after that. But what happens after that remains to be seen. No question, Okafor was good. He was good. I loved Okafor. He’s a good guy and a great professional and he has talent.

But neither one of them blew each other out of the water. Both made statements in their workouts. D’Angelo came in the gym and he really performed really really well. There was no reason for me to question the decision at all. I was on the court right with him and saw it, contrary to most of the people who asked that question and was voicing their opinion with social media. I understand that. But I know what I was looking at.”

Mitch [Kupchak] and Byron [Scott] have told me they became impressed with D’Angelo’s court and passing. What did you see of D’Angelo from his workouts?

Lewis: “I saw all of that. I saw his vision, passing and scoring the ball. The type of questions he asked, the way he saw the floor and the way he handled the ball really made a statement that he is different. His play made that evident.”

What did you see from Okafor?

Lewis: “Okafor was good. He was strong. He’s a nice-sized kid. He was a little unorthodox, which was a good thing, on the block. The way he did things was different than the average big guy. There were points in the game where he puts the ball in the hole. He was good too. But I can’t compare them. They play two different positions. It doesn’t make sense to compare them. But at his position, Okafor was good. For D’Angelo, I saw brilliance and I saw talent. We all knew he needed a stronger body. But he’s doing that. He’s doing everything he needs to be doing to reach his potential.”

What do you think his long-term potential is?

Lewis: “I see him as a player who can do it all. He’s long enough to rebound. He’s witty enough to get assists. He’s becoming stronger. But today right now, he can post up on the block against a lot of guys at his position. I see all of it happening. I see him being clever defensively. He will be able to get triple doubles. How many times in a season? I’m not sure. But a guard that is long and understands the passing angles and is as clever as he is, you never know when that game is going to happen. You never know. Once that chemistry of that morning is perfect and those stars line up, it’s going to happen.”

Lakers have no regrets drafting D’Angelo Russell over Jahlil Okafor