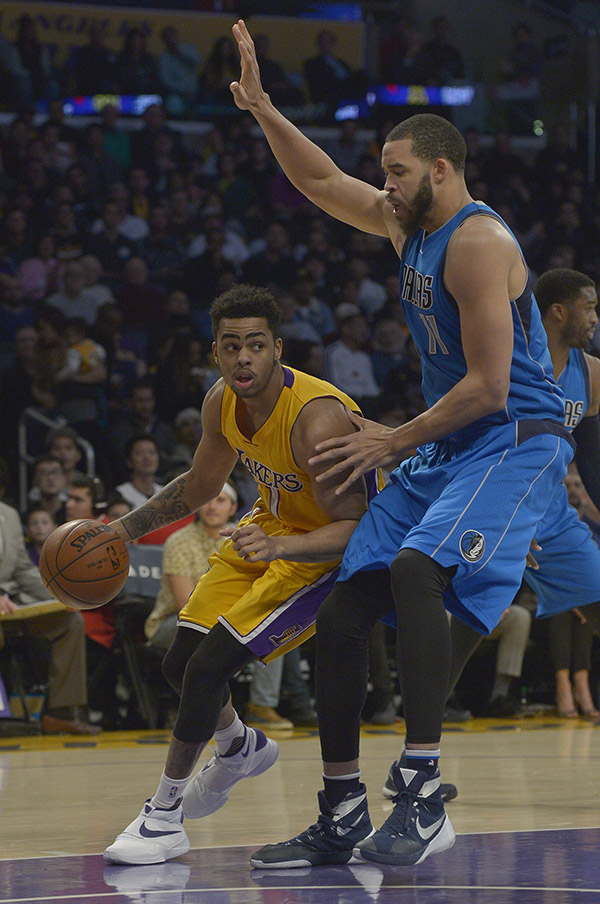 Well before it became clear how his role would evolve through a trying season, D’Angelo Russell offered one quality that became universally promising. Russell believed the quality propelled his game to unforeseen heights. Lakers coach Byron Scott noticed the quality helped Russell distinguish himself on tape and in pre-draft workouts.

The Lakers fell in love with Russell’s confidence, aware that a 19-year-old kid with such self-assuredness would help him push through the NBA pressure cooker. But nearly haflway into the season, that has become a source of contention.

Scott benched Russell for the final 2:31 of the Lakers’ 92-90 loss to the Dallas Mavericks on Tuesday at Staples Center. The Lakers’ head coach believed his 19-year-old rookie point guard “was really trying to take over the game.”

“That’s not him yet. I wanted the ball to move a little bit,” Scott said. “I thought it stuck with him. He tried to make the big shot and things like that. I understand that. But to me, that’s not him right now.”

Russell does not think that’s who he is, either.

He posted only 12 points on a 4-of-12 clip and zero assists in 25 minutes off the bench. He missed a 3-pointer with the Lakers tied 88-88 with 2:54 left. With Russell commanding the offense, the Lakers made one field-goal in a nearly four-minute stretch that entailed Russell driving to the basket and converting on a layup. But Russell argued those numbers had more to do with reacting to the defense than playing hero ball. He also supported his teammates from the bench, including greeting them during ensuing timeouts.

“I was taking what they were giving me,” Russell said. “It was a small split window of taking a shot or passing it up with a shot clock violation on the line. It always was in my hands and I had to take the shot. I missed it. But I don’t know if he would’ve said that if I missed those shots. So you live with it.”

Scott does not seem keen on living with it. He said, “I loves the fact he has confidence,” before quickly revealing his belief that Russell is “pretty close” toward bordering on cockiness.

“He feels he has a lot of confidence in himself,” Scott said. “That’s a good thing. You don’t get this far without having it. Sometimes you don’t get this far without having a little bit of cockiness as well. But you don’t want that to overshadow the confidence that he has. When you get cocky, you’re thinking there’s nothing you can’t do. If you think that, you stop working.”

A review of the tape may have suggested Russell’s poor shooting night also stemmed from the Lakers’ stagnant offense forcing him to take either contested or late shots. But Scott’s criticism has been echoed both in and outside of the Lakers’ organization.

After posting a career-high 27 points against Sacramento earlier this month, Russell boasted, “Ya’ll ain’t seen nothing yet.” Although Russell has averaged 14.65 points on 47.37 percent shooting in the past eight games, he has also posted only 3.1 assists during that stretch.

“He’s been more aggressive to score,” Scott said. “Sometimes he’s taking what they’re giving him. Then there’s other times he’s forcing the issue. He has to find a happy medium. He’s learning.”

Yet, Russell suggested he’s simply learning how to adjust his game based off of defensive coverages.

“We had four or five playmaking players out there. Everybody was trying to [take over],” Russell said. “But they’re a veteran team and rarely mess up. When you catch them slipping a little bit, you have to take advantage of it.”