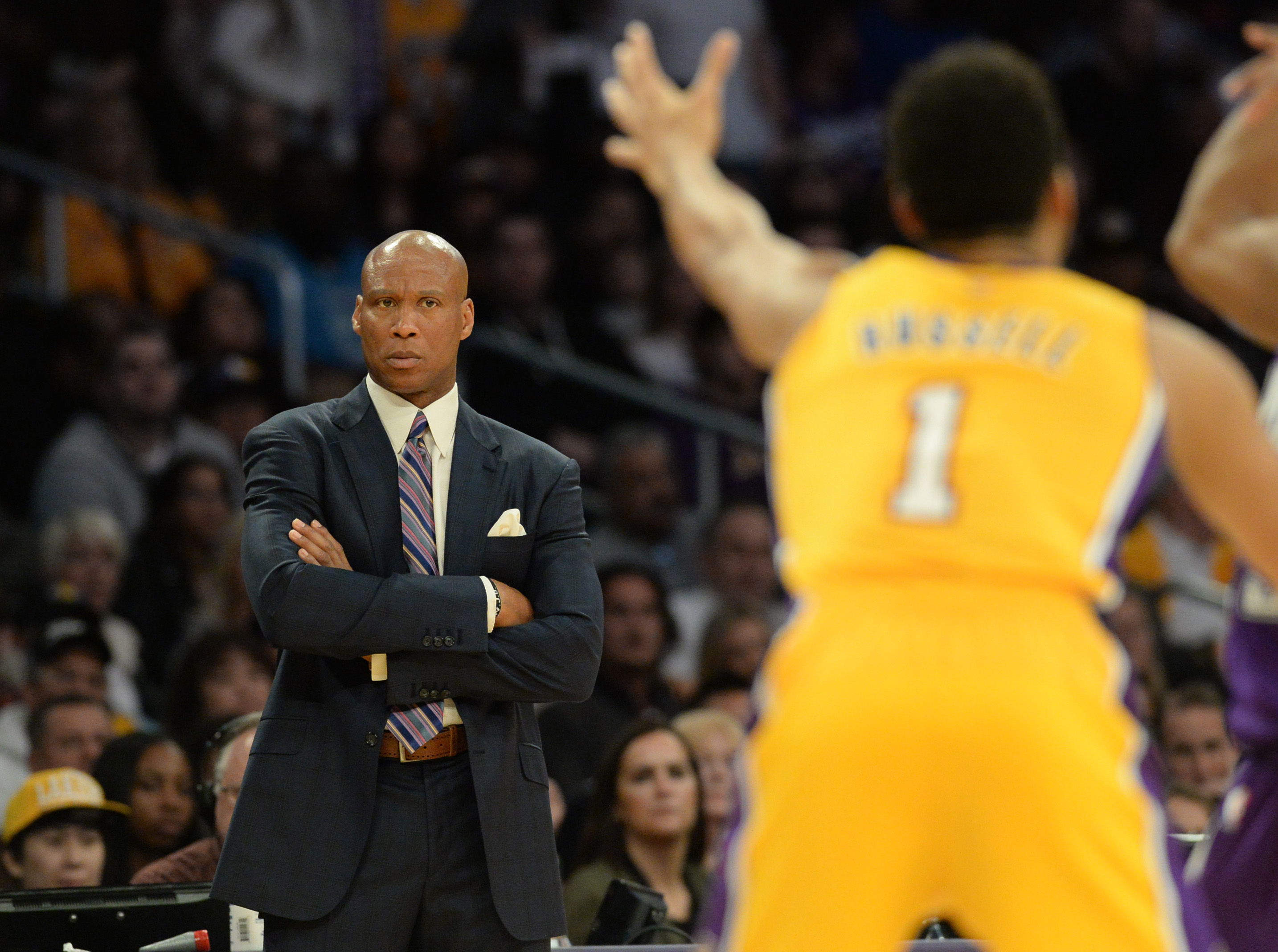 The voice sounded exasperated and the tone sounded frustrated. Clippers analyst and former UCLA standout Don MacLean spoke of what many Laker fans have echoed in thought, on the airwaves and on Twitter.

“I really wish Byron Scott would just give D’Angelo Russell the keys and say, ‘You know what? Go for it man,'” MacLean said on Friday’s telecast of the Lakers-Clippers game on Prime Ticket before reflecting on his time working with Russell in pre-draft workouts. Russell “might be the best passer I’ve ever seen, and I think he’s still playing tentative because he’s looking over his shoulder. He’s coming off the bench. If Byron Scott would just say, ‘You know what, D’Angelo? I don’t care if you turn it over 15 times tonight, you’re going to play 35 minutes. Go for it, and go for it,’ [Russell] will figure it out. He really will.”

The voice sounded annoyed and the tone sounded testy. Scott both defended how he has developed his rookie point guard while also questioning MacLean’s credibility.

“First of all to Don, that’s why you not coaching. Let’s put it that way,” Scott said following Monday’s practice at the Lakers’ facility in El Segundo. “You don’t let a guy go out there and just almost embarrass himself or kill himself by playing 35 minutes and creating 10, 12, 15 turnovers. The one thing it can do is self-destruct him as an individual. So what I try to do as far as teaching him and also protect him from making mistakes like that, and from getting ridiculed after a game like that.”

But that only prompted MacLean to appear later Monday afternoon on the “The Petros and Money Show” on 570-AM to ridicule Scott some more.

MacLean questioned whether argued that Scott’s tough-love approach with Russell has backfired.

“D’Angelo, 50 games in, doesn’t look any different than he did in game one,” MacLean said. “So all the development and protecting that Byron is talking about doing really hasn’t done anything him any good.”

MacLean became defensive over Scott’s apparent unawareness that MacLean worked with Russell during pre-draft workouts. MacLean did not like Scott’s dig on his lack of coaching.

“I’m not coaching because I chose not to coach. We don’t know if I could’ve coached or not. But that doesn’t mean I don’t know the game,” MacLean said. “I’m not the first person to wonder out loud why he hasn’t just given the keys to D’angelo and let him figure it out because you’re going to set records for losing this year. I’m not the only one who asked that question. So I don’t know why he’s picking on me.”

MacLean then criticized Scott’s offensive schemes that he said contains nothing but “isos, no imagination, no creativity on the offensive end.” MacLean also pointed out Scott’s self-touted defensive credentials has only amounted to the Lakers currently ranking 27th out of 30 NBA teams in total defense (106.2 points allowed).

“Is that roster supposed to be 9-41? No. The Sixers are supposed to be 7-41 with that roster,” MacLean said. “When I watch the Lakers, am I watching a team that is playing their asses off and is playing with spirit and enthusiasm and just don’t have enough to win? No. I’m watching an undermanned team that has no clue. I haven’t heard one person go on record either in the media or in print saying Byron is doing a fantastic job.”

Scott is in the second year of a fourth year contract worth $16 million. The Lakers plan on retaining him for the rest of the 2015-16 season, mindful of the challenges Scott faces in managing both Kobe Bryant’s 20th and final NBA season and rebuilding the team’s young core. The Lakers will then evaluate Scott once the season ends.

Scott strongly defended how he has developed Russell, who has averaged 11.9 points, 3.7 rebounds and 3.3 assists in 26.9 minutes per game.

Scott initially thought of bringing Russell off the bench to open the season despite being the team’s No. 2 draft pick. But Scott decided otherwise so Russell could play with Kobe Bryant and Jordan Clarkson against the NBA’s best talent. But Scott reversed course 20 games into the season.

“When I took him out of the starting lineup it was more of not that he wasn’t playing great, it was more to let him know, you still haven’t earned this,” Scott said. “You still have to fight for this. Nothing’s given.”

Scott then mentioned that Bryant did not start his first three NBA seasons. Scott also mentioned Russell averaging 2.5 turnovers in the past two games. Russell also was removed late in the last week’s loss to Dallas amid charges that he was “trying to take over” the game.

“He’s struggling with the decision making,” Scott said. “I told him, ‘You got to let the defense dictate to you what to do. You can’t already come off the screen and say I’m going to make the little bounce pass, it might not be there, and that’s where he’s getting himself in trouble.’ I just want him to relax and play basketball, be aggressive but also be aggressive to be his teammates. I think if he can do it that way, I think he’ll be fine.”

“The more you let him go, the more he develops instead of Byron later on in his comments saying he needs to protect him because he could self destruct,” MacLean said. “No no, D’Angelo is a big boy. He’s making $5 million a year to play basketball. He’s going to be fine. If he has a nine-turnover game, he’s not going to be on the psychiatrist couch the next morning. He’ll be fine. Hell come back and play. At the end of the day, he looks the same to me watching him play last night 50 games in as he did game one. Where is this protection and development going for D’Angelo Russell?”

Time will only tell. But it also created an unexpected exchange of words between a proud Lakers coach and a strongly opinionated Clippers analyst.